Shchastya means "happiness" in Ukrainian, but in recent days the town has been one of the saddest places on Earth, and it is poised to get a whole lot worse 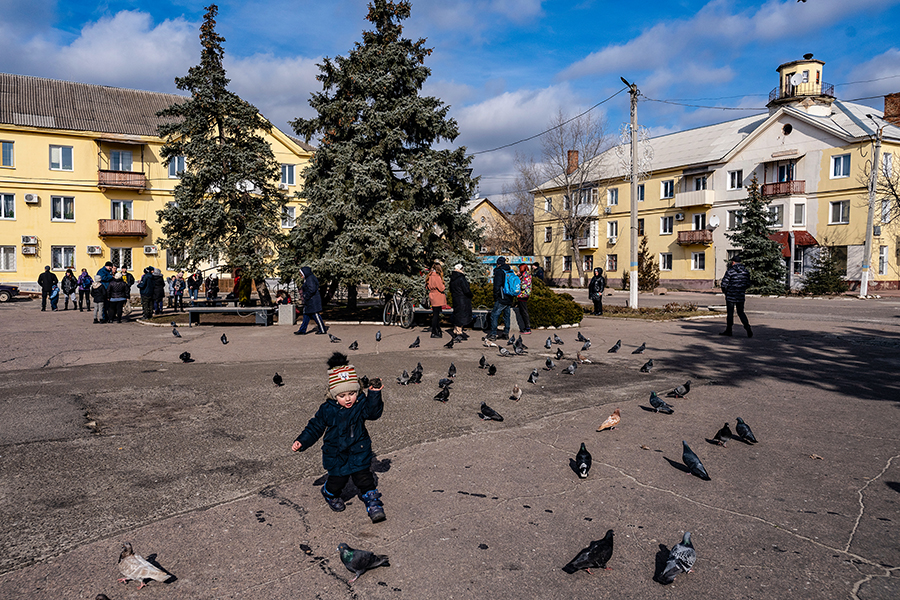 A child plays with pigeons as residents charged their phones off public solar panels in Shchastya, eastern Ukraine, Wednesday, Feb. 23, 2022. Shchastya’s largely Russian-speaking and supporting population, its proximity to the front, and the presence of a strategic coal plant lead some analysts to suggest that it may become the stepping off point for a Russian invasion. (Lynsey Addario/The New York Times)

SHCHASTYA, Ukraine — A drunk sat on a bench, swaying. A few older women, bundled against a biting wind, scurried from a grocery store, clutching plastic bags. Otherwise, the streets of Shchastya were deserted, while the thud of mortar and artillery fire reverberated through town.

Shchastya means “happiness” in Ukrainian, but in recent days the town has been one of the saddest places on earth, and it is poised to get a whole lot worse.

With its largely Russian-speaking and Russia-backing population, its proximity to the front lines in eastern Ukraine and the presence of a strategic electrical generating plant, it has been particularly vulnerable to attack by separatist forces lurking on the far bank of the river running through town.

That has led military analysts and Ukrainian officials to suggest that Shchastya may well emerge as the stepping off point for a Russia's invasion of Ukraine, an offensive originating in the separatist areas that Moscow recognized as independent states on Monday.

The mayor, Oleksandr Bunets, stood outside city hall on Wednesday, smoking a cigarette and surveying the desultory scene. The day before, Shchastya had taken the heaviest shelling in the region, and fighting continued Wednesday between the government and Russian-backed separatist fighters.

“They will try to capture the town,” said Bunets, who was appointed to his position as military-civilian administrator because the townspeople had kept on electing Russian sympathizers as mayor. “They tried yesterday, and they tried the day before.”

In a report released by the Ukrainian Ministry of Interior overnight on Wednesday, listing attacks on government-controlled territory in eastern Ukraine, Shchastya and its environs were by far the most-targeted sites. The report listed 917 instances of incoming munitions from tanks, artillery, mortars, rocket-propelled grenades and small arms.

Stanytsia Luhanska, about a half-hour’s drive to the east, was the second-most active site, the report said, with 220 instances of incoming fire. Most of the incoming fire in Shchastya seemed to be hitting army positions just outside town.

On Tuesday, artillery strikes started a fire at the electrical plant, the town’s largest employer; employees evacuated to a bomb shelter while it burned, the company said. The fire was eventually extinguished, but water pipes were damaged and residents now fetch water from wells in plastic pails.

This is a particularly glum time for the town, but the name, Happiness, has been a stretch for years now.

Two-story brick apartment buildings, dreary and forlorn, slope down a hill of sandy soil and pine trees to the Seversky Donets River, with the industrial blight of the coal-fired power plant on one side and separatist military positions on the other. The roads are potholed, and many of the apartment blocks are partly deserted, reflecting the exodus after the war began that slashed the population by about half, to 7,000 today.

The mayor’s status as a military appointee — Bunets holds the rank of lieutenant colonel in the Ukrainian army but now serves in a civilian capacity — captures the complexities in many of the front-line mining and farming towns of eastern Ukraine.

Pro-Russia sentiment runs deep, paradoxically, even as these sites have borne the brunt of the conflict over the past eight years and are likely to suffer in the new military action. Pro-Russia views have declined over the years, due in part to the efforts of countless Ukrainian nongovernmental groups. But they have never vanished, and many people have family ties with Russia.

The former mayor of Shchastya, for example, switched sides and lives in the Luhansk People’s Republic, across the river. Bunets, in contrast, hails from the western Ukrainian town of Mukachevo, and his staff members make a point of speaking only in Ukrainian with the Russian-speaking local population, stirring some resentment.

They kept it up Wednesday, speaking in Ukrainian to perplexed residents who turned up at city hall with complaints of broken water mains and homes without electricity, as explosions boomed in the distance.

“The government language of Ukraine is Ukrainian, and government bodies have to speak Ukrainian,” Bunets said. In emergencies, he said, he will speak Russian. “Right now, people are complaining that there is no water. We can’t supply water for now. Repair work is ongoing when it is quiet.”

With most of the shelling directed at the plant and government military installations, no civilians had been injured as of midday Wednesday, Bunets added.

He denied there was any strong pro-Russian feeling in the town and said people certainly did not want to live in one of the ministatelets recognized by Russia. “Honestly, people want to live in a normal, civilized country,” he said. “There are many positive benefits to civilization.”

Nevertheless, it is not hard to find people expressing sympathetic views about Russia. Igor Rashupkina, 50, a driver for the electrical company, said he hoped the city would not fall but nonetheless harbored no ill will toward Russia. His son, he said, works in the oil industry in Siberia.

Because the Russian border is close, many families in Shchastya are divided between the two countries. “I was born here. This is my town. I won’t leave” no matter what happens, Rashupkina said.

Shchastya was not always such a grim place, said Maryna Danyliuk, 65, a retired worker at the electrical power plant.

She moved here in 1987, from Chelyabinsk, a city in the Ural Mountains in Russia, to marry a Ukrainian man. “I loved this town back then,” she said. “It was so green and very comfortable; everything worked. Now, it is pale.”

Since the war began in 2014, though, the town’s proximity to the front line has taken its toll. “The city changed. It became evil, unfriendly,” Danyliuk said. “It never became the same city I knew before. It feels like a snake is just around the corner.”