They are outgunned and outnumbered by Russia's military might, but Ukrainian troops and civilians have managed to slow, if not stop, Putin's plan of quick destruction 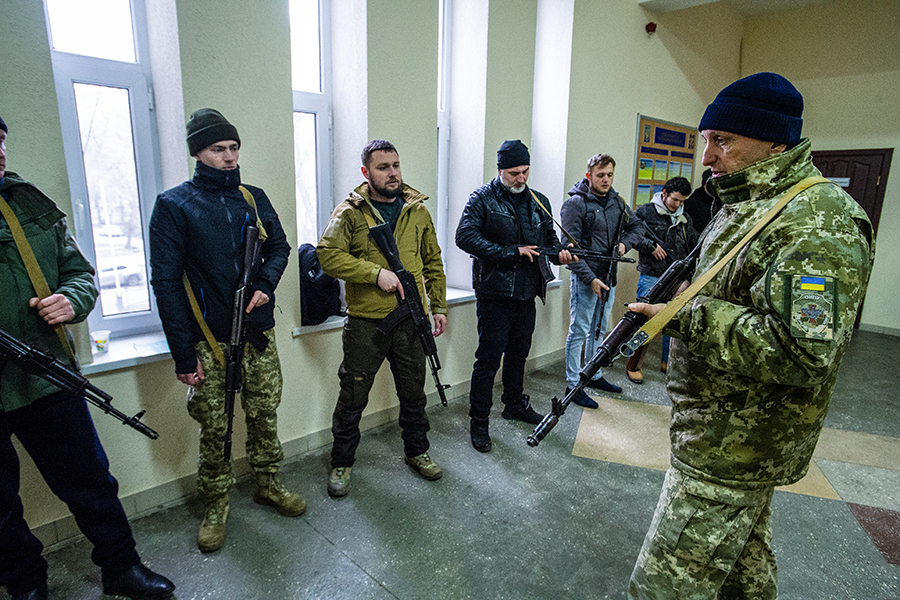 An instructor discusses urban combat as Ukrainian civilians undergo basic military training at a volunteer center in a state educational institution, before an expected Russian assault on March 5, 2022 in Odessa, around 132 kms East of Mykolaiv, Ukraine. The Ukrainian volunteers are trained by former, reserve and veteran Ukrainian officers. Russian forces invading Ukraine from three sides since February 24 have frequently met fierce resistance, and these trainees say they aim to help deprive Russia of the prized Black Sea port of Odessa.
Image: Scott Peterson/Getty Images

MYKOLAIV, Ukraine — The remains of a Russian Tigr fighting vehicle sat smoldering on the side of the road, as Ukrainian troops lounged outside their trenches smoking cigarettes. Nearby, a group of local villagers was tinkering with a captured T-90 tank, trying to get it running again so that the Ukrainian army might use it.

For three days, Russian forces had fought to take Mykolaiv, but by Sunday, Ukrainian troops had driven them back from the city limits and retaken the airport, halting the Russian advance along the Black Sea, at least temporarily. By Monday morning, Russian forces had resumed their attack.

“Few expected such strength from our people because, when you haven’t slept for three days, and when you only have one dry ration because the rest burned up, when it’s negative temperature out and there is nothing to warm you, and when you are constantly in the fight, believe me, it is physically very difficult,” said Col. Sviatoslav Stetsenko, of the Ukrainian army’s 59th Brigade. “But our people endured this.”

Taking Mykolaiv remains a key objective for Russian forces, and the thwomp of artillery in the distance Sunday suggested that the Ukrainians had not pushed them back that far. But the unexpected Ukrainian success of defending this critical port, about 65 miles from Odesa, underscores two emerging trends in the war.

Russia’s failure to seize Mykolaiv and other cities quickly, as President Vladimir Putin of Russia appears to have intended, is largely a function of its military’s faltering performance. Russian forces have suffered from logistical snafus, baffling tactical decisions and low morale.

But it is the fierce and, according to many analysts, unexpectedly capable defense by Ukrainian forces, who are significantly outgunned, that has largely stalled the Russian advance and, for now, prevented Mykolaiv from falling into Russian hands.

For three days, troops from the Ukrainian army’s 59th Brigade, together with other military and territorial defense units, have been defending Mykolaiv from Russian attack along several fronts, facing down punishing artillery barrages, helicopter attacks and rocket strikes, some of which have hit civilian neighborhoods.

Most military analysts predicted that if Russia mounted a full-scale invasion, Ukraine’s military would not last more than a few days or even hours. But by taking advantage of their local knowledge, attacking lumbering Russian troop columns with small, lithe units and using Western military assistance like anti-tank grenades to maximum effect, Ukrainian forces have managed to slow, if not stop, the Russian advance.