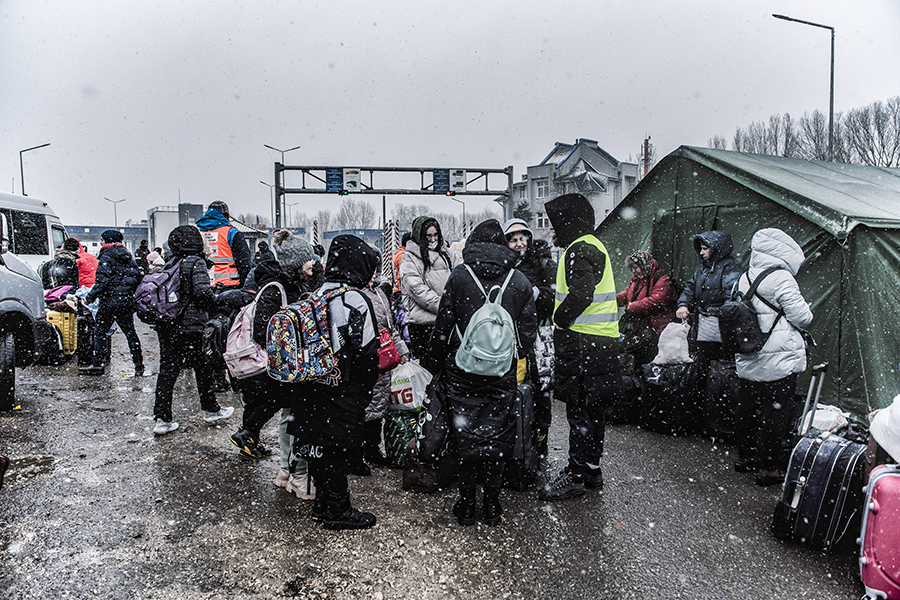 Refugees who recently crossed the border from Ukraine rest before moving on from a temporary camp in Palanca, Moldova, March 1, 2022. At least 660,000 people, mostly women and children, have fled Ukraine in the five days after Russia invaded — the most intense wave of European migration since at least the 1990s. (Laetitia Vancon/The New York Times)

ON THE UKRAINIAN-MOLDOVAN BORDER — The war in Ukraine has set off the fastest mass migration in Europe in at least three decades, prompting comparisons with the Balkan wars of the 1990s and providing echoes of the vast population displacement that followed World War II.

At least 660,000 people, most of them women and children, fled Ukraine for neighboring countries to the west in the first five days of Russia’s invasion, according to the United Nations refugee agency, which collated statistics recorded by national immigration authorities. And that figure does not include those displaced within Ukraine, or who fled or were ordered to evacuate to Russia.

In less than a week, the flight of Ukrainians is at least 10 times higher than the one-week record of people entering Europe during the 2015 migration crisis, and nearly double the number of refugees recorded by the U.N. during the first 11 days of the Kosovo war in 1999.

The historic westward movement of people has caused lines of up to 24 hours at border checkpoints along Ukraine’s borders with Poland, Moldova, Hungary, Slovakia and Romania, and prompted a vast humanitarian response by both governments and civilians.
Refugees have been sheltered in repurposed schools as well as private apartments, makeshift camps, conference centers, upscale wineries and even the home of a Moldovan lawmaker.

“We don’t know where we’re going,” said Anna Rogachova, 34, a homemaker from Odessa, a Ukrainian city on the Black Sea, minutes after crossing into Moldova with her 8-year-old daughter Tuesday morning. “And we don’t know when we’re coming back.”

“Let the world know,” Rogachova said, pointing at a multicolored suitcase in the back of her car. “We left everything. We put all our lives in this single bag.”

Then, as the snow began to fall, she started to cry.

Some refugees believe the war will end soon, allowing them to return quickly. Rogachova wasn’t so sure.

A displacement stretching out for years would present long-term challenges for Ukraine, which would face a brain drain of rare proportions, and for host countries where resources are limited and anti-immigrant sentiment has run strong. But it could mean opportunities; Eastern European countries like Moldova, which have experienced depopulation for decades, could suddenly find themselves boosted by a large, educated immigrant population.

U.N. officials have said the war could produce as many as 4 million refugees. If the fighting becomes protracted and Ukrainians continue to migrate at the current rate, that could be a conservative estimate, said Philipp Ther, professor of Central European history at the University of Vienna, and the author of a history of refugees in Europe since 1492.

“That would be on the scale of the postwar situation,” Ther said in a telephone interview.

Large numbers of civilians on the move could restrict the Ukrainian military’s ability to maneuver, just as huge refugee flows hindered armies at the end of World War II, he said.

Such was the extent of the migration this week that secondary logjams occurred at crossings far beyond Ukraine’s borders, including on the Moldovan-Romanian border, 70 miles west of Ukraine, as some Ukrainians attempted to push on to friends and family based in Central Europe and beyond.

In some ways, the crisis was no surprise. In Moldova, the government had planned for months for a sudden influx, Moldovan Interior Minister Ana Revenco said in a phone interview. But the scale of the crisis was shocking: By Monday night, 70,000 people — more than double the government’s projections — had entered Moldova, a nation of just 2.6 million and one of Europe’s poorest.

The flows include hardly any men ages 18-60, who are barred by the Kyiv government from leaving Ukraine unless they have a medical condition that would restrict their ability to fight.

“In terms of the intensity,” Revenco said, “it was probably something nobody was prepared for.”

Lost in the grand narratives were the small and sad stories of individual people. Many were in shock — not only at the war itself, but also at the suddenness with which they had been ripped from a life of normalcy.

When war broke out Thursday, Rogachova had just returned from a figure-skating competition in Kharkiv, where her daughter, Maria, 8, took first place.

A 17-year-old high school student had just celebrated her birthday in Odessa.

A 34-year-old singer had just come back to Ukraine from Russia, dismissing the talk of war.

On Tuesday morning, all three were in the Moldovan snow, unsure when or if they would return.

The singer, Julia Kondratieva, planned to press farther west, fearing the war would spill over into Moldova. “It’s not a good idea to stay,” she said. “Maybe there will be fighting here.”

Leaving in such a rush, many had forgotten or abandoned their most prized belongings. Apart from clothes, food and essential documents, Rogachova had packed just her daughter’s skates.

As is common at the start of mass migrations, the earliest arrivals were often those with the money and the means to move quickly. At the Palanca border crossing in Moldova Tuesday, the cars leaving Ukraine included four-by-fours and German-made sedans. At a nearby winery-cum-resort, most of the guests were Ukrainians, waiting to see if the war would ebb before deciding whether to push onward.

But there were also many without such options.

Trudging across the snowy border, there were mothers pushing strollers, a schoolgirl clutching her books, a woman carrying a bag of toilet paper and another carrying a small dog.

Some had decided to leave only hours before, after an increase in air raids around a previously calm Odessa.

On the night before they all left for Moldova, Rogachova hunkered down with her daughter, Maria, and mother, Viktoria Tkatchenko — all native Russian speakers.

“Never, ever forget you’re Ukrainian,” Tkatchenko had told her granddaughter.

“We’ll speak Ukrainian at home,” the child had promised.

But now it wasn’t clear where home was.

And standing in the snow, Rogachova was again in tears.

Tweets by @forbesindia
Putin 'badly miscalculated' in invading Ukraine; 'will pay a price': Biden
Photo Of The Day: Refugee crisis