The first talks aimed at halting the Russian invasion were eclipsed by a deadly Russian rocket assault on Kharkiv, Ukraine's second-largest city, and may have included internationally banned cluster munitions, killing nine civilians and wounding dozens 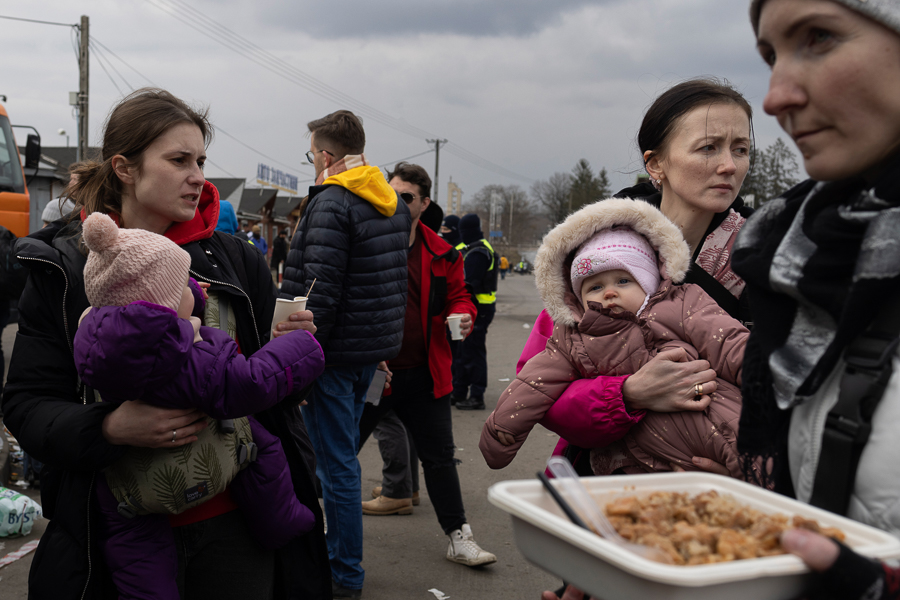 KYIV, Ukraine — The first talks between Ukraine and Russia aimed at halting the Russian invasion were eclipsed Monday by a deadly Russian rocket assault on Kharkiv, Ukraine’s second-largest city, that raised new alarms about how far the Kremlin was willing to go to subjugate its smaller neighbor.

The bombardment of a residential area of Kharkiv, which may have included internationally banned cluster munitions, killed at least nine civilians and wounded dozens.

With the Ukrainian-Russian talks ending with little more than an agreement to meet again, the bombardment signaled a potential turn in the biggest military mobilization in Europe since World War II, in which Russia has met unexpectedly stiff resistance by Ukrainians and strong condemnation from much of the world.

“Today showed that this is not only a war, it is the murder of us, the Ukrainian people,” Kharkiv’s mayor, Igor Terekhov, said in a video posted on Facebook. “This is the first time in its many-year history that the city of Kharkiv has been through something like this: shells that hit residential homes, killing and maiming innocent citizens.”

Russian forces have been shelling the outskirts of Kharkiv, an eastern Ukrainian city with 1.5 million people, since launching an invasion last week. But they appeared to be avoiding heavily populated areas.

On Monday, the fifth day of the Russian assault, that changed when Kharkiv was hit by a barrage of rockets.

Terekhov said four people had been killed when they emerged from bomb shelters to find water. And he said a family of five — two adults and three children — was burned alive when a shell hit their car. Another 37 people were wounded, he said.

President Volodymyr Zelenskyy of Ukraine on Monday called for an international tribunal to investigate and punish Russia for its actions in his country, which he described as war crimes.

“Today, Russian troops shelled Kharkiv using rocket artillery,” Zelensky said in a video posted on his Facebook page. “This is, without any doubt, a military crime. A peaceful city. Peaceful residential neighborhoods. Not a single military object in sight.”

Neither Russia nor Ukraine is a member of the treaty that bans cluster munitions, which can be a variety of weapons — rockets, bombs, missiles and artillery projectiles — that disperse lethal bomblets in midair over a wide area, hitting military targets and civilians alike. But their use might well mark a new — and bloodier — chapter in the battle for Ukraine.

“We are convinced that this was a cluster munition attack,” Stephen Goose, a munitions expert at Human Rights Watch, said in an email.

The indiscriminate nature of the Kharkiv assault, made clear in videos verified by The New York Times, may indicate impatience by President Vladimir Putin with his military’s progress in what many outside analysts — and some Ukrainian commanders themselves — had predicted would be a fast Russian victory over an outgunned and outmanned adversary.

Putin’s grievance-laden decision, announced last week, to invade Ukraine has inspired widespread resistance in the former Soviet republic and beyond. Hundreds of thousands of Ukrainians are fleeing their homeland, but many are staying put, turning to whatever weapons are at hand to try to thwart the invaders.

Moscow is also encountering vigorous opposition internationally, and has become increasingly isolated as the United States and its allies vastly expand economic sanctions on Russia and on Putin’s allies. On Monday, Royal Dutch Shell became the second big oil company in two days to quit partnerships in Russia, a major energy producer, following BP on Sunday.

More aggressive actions could be in store. Sen. Christopher Murphy, D-Conn., said after a classified briefing Monday that the United States and allies were preparing to go beyond freezing the assets of Putin and Russian oligarchs and actually begin seizing them. “This is likely a further step than Putin’s inner circle anticipated,” Murphy said on Twitter.

Even Switzerland, a favored haven of Russian oligarch money, sidelined its customary neutrality and froze assets held by Putin and his subordinates, further limiting their access to financial resources already squeezed by the sanctions announced by President Joe Biden and members of the European Union.

The face-to-face Russian-Ukrainian talks, held by representatives in Belarus, a close partner of Moscow’s, suggested that the Kremlin was feeling the pressure to at least appear amenable to diplomacy, but they ended with no discernible progress.

Even before they began, Zelenskyy, who has rejected Russian demands to capitulate, had signaled that he did not expect any diplomatic breakthroughs. As if to punctuate his disdain for Putin, on Monday he signed a decree requesting Ukraine’s immediate membership in the European Union. Officials in Brussels welcomed that request in principle, although suggested it was unrealistic.

All the while, Russian forces were pursuing their incursion amid signs that they might move to seize or encircle Kyiv, Zelenskyy’s base, and to isolate, capture or perhaps even kill the Ukrainian leader whose defiance of the Kremlin has made him a hero to many at home and abroad.

Satellite imagery showed that a large convoy of Russian armed forces, roughly 17 miles long, was about 20 miles north of Antonov Airport, on the outskirts of Kyiv, the capital. Its mayor, Vitali Klitschko, issued a statement advising residents to spend the night from Monday to Tuesday in basements or bomb shelters, if possible. “Tonight will again be difficult,” he wrote.

A member of the Ukrainian delegation to the talks, Mihailo Podolyak, said negotiators were seeking a cease-fire and an end to hostilities. Both sides, he said afterward, had “identified a number of priority topics in which certain solutions were outlined.”

Vladimir Medinsky, a former Kremlin culture minister who led the Russian delegation, said the negotiators had “found certain points where we can predict common positions,” and that a second meeting in Belarus would be held in the “coming days.”

Belarus has sought to portray itself as a neutral host for the talks, which were first announced Sunday, but the country’s authoritarian president, Alexander Lukashenko, has not only aligned himself with Putin but also allowed the Russian leader to launch part of the invasion from the Belarus border, which is only 40 miles from Kyiv. There have also been reports that Belarusian troops may join the invasion.

Murphy said he had been told in the classified briefing that the Russians have fallen behind their invasion timeline and that “there have been multiple Russian equipment and logistics failures.” He added that it is believed that Russia will try to encircle and cut off Kyiv in the next several weeks and that the fight for the capital is expected to be “long and bloody.”

Both Russia and Belarus were excoriated by Western diplomats Monday at an emergency meeting of the United Nations General Assembly, which is expected to vote this week on a resolution that would condemn the Russian invasion. While such resolutions have no enforcement power, diplomats said they could help escalate the pressure on Russia to end the war.

The flow of Ukrainian refugees to neighbors since the Russian invasion has created backups at border crossings with Poland and Moldova. The U.N. refugee agency, which reported that 500,000 Ukrainians have fled so far, said it was expecting as many as 4 million to follow.

At least 36,000 Ukrainians have entered Moldova, a nation of 2.6 million that is among the poorest in Europe. The tiny country is better known for its rapid depopulation, not its appeal to refugees. And yet in recent days, it has been putting Ukrainians up at wineries, schools, a former coronavirus ward and even the home of a lawmaker.

“This is unprecedented, totally unprecedented,” said the lawmaker, Dumitru Alaiba, who was hosting a refugee from Odessa. “It’s magical what we see in terms of solidarity.”

Tweets by @forbesindia
If we think about our employees, we will be a more effective organisation: Allstate India's Chetan Garga
From culture to commerce, sports to travel, the world is shunning Russia