Security camera footage showed a building ablaze inside the Zaporizhzhia nuclear complex near a line of military vehicles; President Zelenskyy says an explosion there would have been "the end of everybody, the end of Europe" 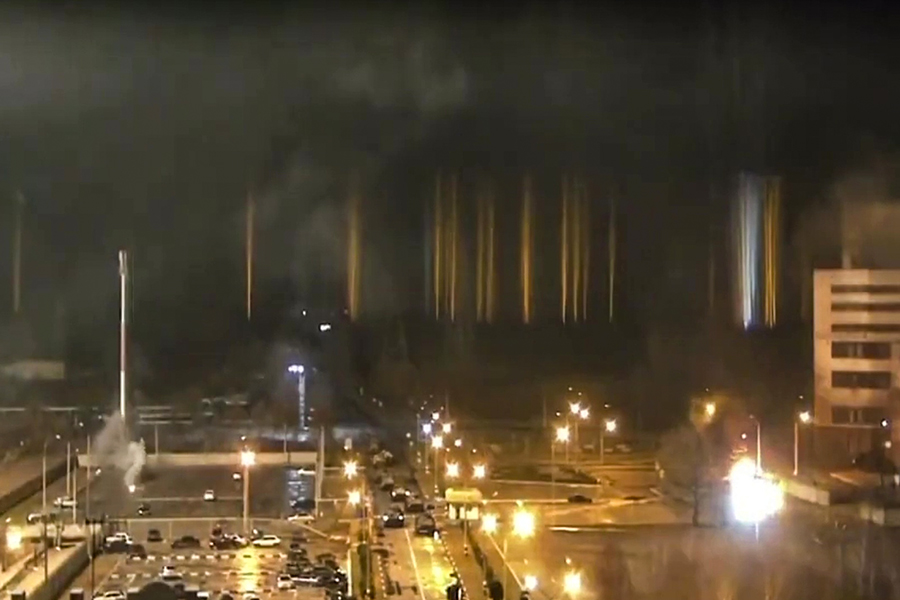 ZAPORIZHZHIA, UKRAINE - MARCH 4: A screen grab captured from a video shows a view of Zaporizhzhia nuclear power plant during a fire following clashes around the site in Zaporizhzhia, Ukraine on March 4, 2022. (Photo by Zaporizhzhia Nuclear Power Plant/Anadolu Agency via Getty Images)


A fire broke out early Friday at a complex in southern Ukraine housing Europe’s largest nuclear power plant after Russian troops fired on the area, the Ukrainian government said.

Security camera footage verified by The New York Times showed a building ablaze inside the Zaporizhzhia nuclear complex near a line of military vehicles. The videos appeared to show people in the vehicles firing at buildings in the power plant. Ukraine’s state emergency service later said the blaze went out after 6 a.m.

President Volodymyr Zelenskyy of Ukraine accused the Russian military of deliberately attacking the complex and said an explosion there would have been “the end for everybody, the end of Europe.”

“Only immediate actions by Europe could stop the Russian army,” he added.

The fire had not affected essential equipment at the plant, the International Atomic Energy Agency said on Twitter, citing its communication with the Ukrainian government. It said that personnel at the plant were “taking mitigatory actions.”

The fire broke out after a Russian attack on a training building outside the perimeter of the plant, according to a statement by Ukraine’s state emergency service. Reuters said that only one of the complex’s six reactors was online.

A spokesperson for the nuclear plant, Andriy Tuz, was quoted by The Associated Press as telling Ukrainian television that shells had set fire to one of the plant’s six reactors that was under renovation and not operating. It said the reactor had nuclear fuel inside.

The Ukrainian nuclear regulator said Friday that no leaks of radiation have been detected at the Zaporozhye nuclear power plant, which caught fire overnight during a battle with Russian troops."Changes in the radiation situation have not been registered," the State Nuclear Regulatory Inspectorate of Ukraine said.

President Joe Biden spoke with Zelenskyy about the fire and joined him in urging Russia to “cease its military activities in the area and allow firefighters and emergency responders to access the site,” the White House said. Local reports later said that emergency crews had gained access.

Biden’s energy secretary, Jennifer Granholm, said on Twitter that the United States had not detected elevated radiation readings in the area, echoing an earlier assessment by the International Atomic Energy Agency. “The plant’s reactors are protected by robust containment structures and reactors are being safely shut down,” she said.

The Ukrainian foreign minister, Dmytro Kuleba, had warned that the fire posed a significant risk.

“If it blows up, it will be 10 times larger than Chernobyl!” he said on Twitter, referring to the disaster at that nuclear site in 1986. “Russians must immediately cease fire and allow firefighters to establish a security zone,” he said.

Prime Minister Boris Johnson of Britain said he would seek an emergency meeting of the United Nations Security Council about the blaze at the complex, according to his office.

Rafael Mariano Grossi, director general for the International Atomic Energy Agency, said on Twitter that he had spoken with Ukrainian officials about the situation at the plant. He appealed for a halt to the fighting and warned of “severe danger” if the reactors were hit.

The American Nuclear Society condemned the Russian attack on the reactor complex.

Earlier, Grossi had said that “a large number of Russian tanks and infantry” had entered Enerhodar, a town next to the plant, and that infantry troops were “moving directly” toward the reactor site.

The mayor, Dmitry Orlov, told a local radio station that fierce fighting between Russian and Ukrainian soldiers had been raging on the approaches to the plant, according to the station’s Twitter account. The mayor called for an immediate cease-fire.

The Zaporizhzhia nuclear complex, on the Dnieper River roughly 100 miles north of Crimea, is the largest in Europe. According to the International Atomic Energy Agency, its six reactors produce a total of 6,000 megawatts of electric power.

In comparison, the Chernobyl plant in northern Ukraine produced 3,800 megawatts — about one-third less. (A megawatt, 1 million watts, is enough power to light 10,000 hundred-watt bulbs.) The four reactors of the Chernobyl complex were shut down after one suffered a catastrophic fire and meltdown in 1986.

The reactors’ cores are full of highly radioactive fuel. But an additional danger at the Zaporizhzhia site is the many acres of open pools of water behind the complex where spent fuel rods have been cooled for years. Experts fear that errant shells or missiles that hit such sites could set off radiological disasters.

For days, social media reports have detailed how the residents of Enerhodar set up a giant barrier of tires, vehicles and metal barricades to try to block a Russian advance into the city and the reactor site. Christoph Koettl, a visual investigator for the Times, noted on Twitter that the barricades were so large that they could be seen from outer space by orbiting satellites.

Starting Sunday, Ukraine’s nuclear regulator began reporting an unusual rate of disconnection: Six of the nation’s 15 reactors were offline. On Tuesday, the Zaporizhzhia facility was the site with the most reactors offline.

With inputs from AFP

Tweets by @forbesindia
Sony, Honda to team up for new electric vehicle firm
Tally Solutions: Creating a culture of care