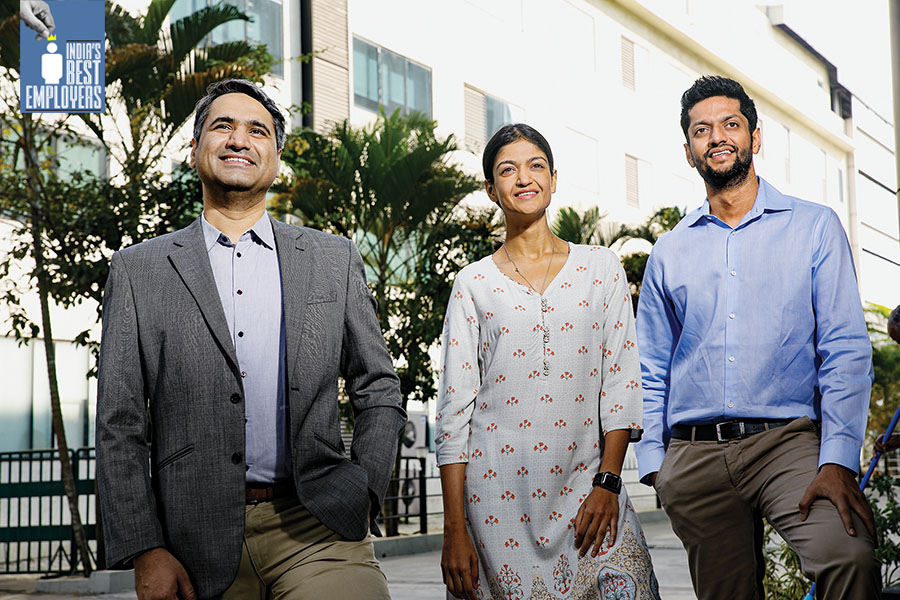 
Care and transparency are two words that Tejas Goenka repeatedly uses while talking about the work culture at Tally Solutions. The Bengaluru-headquartered business management software solutions company claims to have always put people at the centre of everything it does. And that became increasingly visible in the last two years when the Covid-19 pandemic disrupted normalcy in everyone’s personal and professional lives.

“There was a lot of uncertainty in the beginning, so we would get on a call with everyone, and share what we knew and what the company was doing. It was all about being transparent,” says Goenka, who is managing director, adding that losing four employees during the second wave was traumatic. “It was a troubling phase, but everyone stood for each other, by each other. We took proactive steps to assuage concerns… the general thing was to listen and act. It just extended that care aspect.”

Nupur Goenka, executive director, elaborates. “Care is not only top-down at Tally. You see it reciprocally, laterally; it is going out of your way for each other regardless of who you are and where you are in the team,” she explains.

One of the biggest challenges during the pandemic—when people switched to working from home—was to keep the morale of employees intact in an atmosphere of vulnerability. Among the many things that Tally did during this phase was getting vice chairperson Bharat Goenka on a call and telling employees that their health came first, then their families, and work after that, says Chetan Yadav, who is chief people officer. He says despite its size—1,000-odd employees—it was among the earliest companies to arrange vaccines for its staffers and their extended families.

There was also a 24-hour toll free number—managed by employees—that provided medical assistance, including arranging hospital beds and oxygen concentrators, financial support and emotional help. “This level of care meant that the employees knew that they had the organisation’s back. It helped them manage their fear and ambiguity,” says Yadav, adding that flexibility in leaves and logistical support were no-brainers.

Kamal Karanth, co-founder of specialist staffing company Xpheno, calls Tally an “employee-friendly company”. He cites the example of the organisation taking responsibility of an ‘indirect’ employee’s family after he passed away. His wife was suffering from cancer and had a college-going daughter. Tally took full responsibility of her education. Yadav adds that apart from life insurance benefits, the company continues to extend financial help to the families of the deceased and is committed to their children’s education till graduation.

Its employees say the organisation was flexible during Covid and that helped them deal with the unexpected challenges of working from home. “Tally has the most employee-friendly policies I have ever experienced. There have also been instances where the HR has allowed ‘exception’ in policy, if required,” says Abbas Mohammad Ishaq Surve, who is senior information designer. Concurs Vikas R Panchal, general manager, MENA. “In the past two years, many people struggled with their companies. We were blessed to be with Tally… not only did we never have to worry about our salaries, but we were given extra care and comfort in challenging times,” he says.

To ensure the sanity of its workforce in a volatile environment, Tally took special efforts for their physical and mental wellbeing. Counselling, therapy, psychiatrists and clinical psychologists were available for anyone who required help, and there were exercise and yoga sessions too, apart from personality development programmes. “The entire team rallied together… we had a network across the country in case something happened, in case anyone in the ecosystem needed help. It created a safety net,” says Nupur.

Goenka believes three things draw people to Tally. Legacy—it is a 36-year-old company; culture—going out of the way for its staffers, partners and customers; and ambition—thinking big. As a result, he claims that the company’s attrition rate is in single digits—it did not lay off anyone during the pandemic—although the industry average hovers around 30 to 35 percent. He, however, admits getting the right talent is a task. “Being one of the full-stack product companies, finding talent in a services market in India is not easy,” he says.

Yadav says the company fills new positions internally. “We have a healthy number of people who get promoted every year,” he says. “Our hiring process is fair and equal to all. We look out for a diverse talent pool.”

Nupur reveals certain changes in policies were spearheaded by the teams. Their responses were taken into account before implementing them. She says Tally recently put in writing its perspective on gender diversity and inclusivity. “It has always been there. But our hiring team has been thinking about how we can do much more to push that culture forward,” she explains.

Tally’s product caters to millions of users and it has a network of over 28,000 partners. “It is an organisation which believes in having real relations,” says Karanth. “Its business model is built on a huge partner network. The way it nurtures them is commendable. The company looks at them as an extension of itself and gives its partners utmost respect.”

It is the people, Goenka feels, who make a company. “From a business context, people are everything,” he says. “For a product company, the smarter, the happier, the more creatively enthused people you’ve got, the more the company then succeeds.”

(This story appears in the 11 March, 2022 issue of Forbes India. To visit our Archives, click here.)

Tweets by @forbesindia
Fire breaks out at Ukraine's nuclear complex as Russian forces move through
I want to win the world cup for India: Harmanpreet Kaur