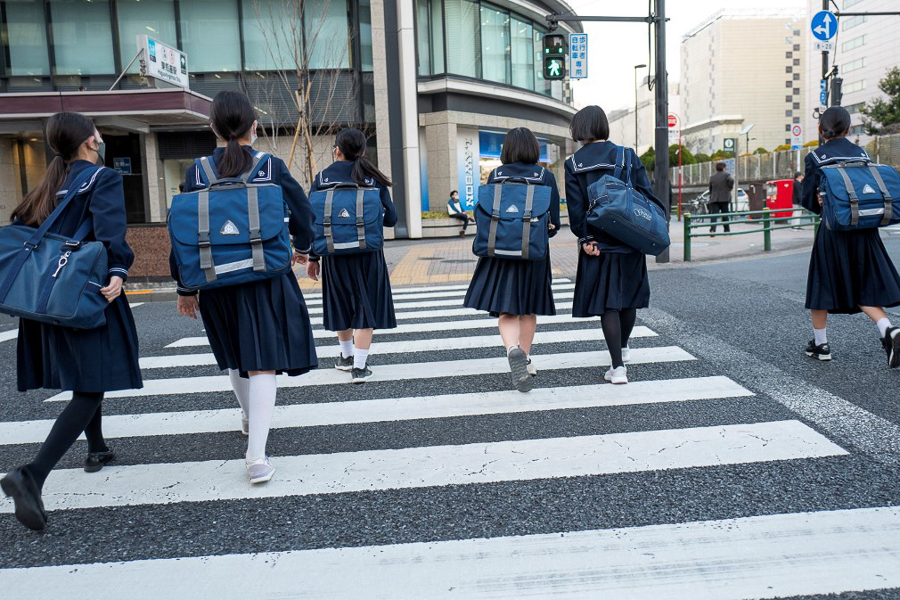 Junior high school students return home from school in Tokyo, March 15,2020. Authorities will actively recommend and share information about HPV vaccine, which is free for girls aged 12-16 in Japan and has been found safe in extensive trials, from April 1, 2022. (Credit: Kazuhiro Nogi/ AFP)

Tokyo, Japan: Thousands of lives could be saved as Japan begins to actively promote the HPV vaccine—which can prevent cervical cancer—after a decade of misinformation and weak policy left inoculation rates dismally low, advocates say.
The percentage of teenage girls getting the human papillomavirus (HPV) vaccine has been close to zero since the country's 2013 decision not to promote the jab as panic erupted over alleged side effects.
But from Friday, authorities will actively recommend and share information about the vaccine, which is free for girls aged 12-16 in Japan and has been found safe in extensive trials.
"Finally we can protect the lives of young women," ruling party politician Junko Mihara, a former vice health minister and cervical cancer survivor, told AFP.
Even then, "we will lose so many lives because of the past eight years," she said.
Nearly always caused by sexually-transmitted HPV, cervical cancer is the fourth most common type of the disease in women globally.

In Japan, around 10,000 women develop cervical cancer each year, and it causes nearly 3,000 deaths.
Yet the World Health Organization regards the disease as "preventable and curable" and has outlined a strategy to eliminate it, which includes having 90 percent of girls inoculated by the age of 15 by 2030.
More than 100 countries have started using the vaccine, including Britain, where cervical cancer cases have already plummeted among women who received the jab, according to a recent study in The Lancet medical journal.

When Japan added the HPV vaccine to its national programme of routine inoculations in April 2013, initial uptake from the target group, girls aged 12-16, was around 70 percent.
But the government stopped actively promoting the jab just two months later, as sensationalist reports of alleged harmful side effects spread fear among the public.
It was still available for free, but without official endorsement, take-up soon dropped to less than one percent.
"The health ministry placed more emphasis on public opinion than scientific evidence," said Kanako Inaba, a gynecologist who runs an organisation providing information on the HPV vaccine.
This week's policy shift follows years of campaigning by medics and advocates like Mihara, a former actress who went into politics in 2010 to advocate for the new HPV vaccine.
But she struggled to battle misinformation, with media reports failing to make clear the difference between health problems that occurred after vaccination, and side effects directly linked to the jab.
Families gave emotional accounts on TV claiming the HPV vaccine had left their daughters unable to walk, and pro-vaccine campaigners like Mihara found themselves the target of angry abuse.
"People came to my office, and faxes kept coming," she recalled.
While there have been concerns over Japanese vaccine hesitancy in the past, the success of the country's Covid-19 vaccine drive — with 80 percent of the population double-jabbed — shows how influential government policy can be, according to Inaba.
"The government should have also taken a firm stance on the HPV vaccine, by providing evidence," like they did with the Covid vaccine, the doctor said.
Now, as more HPV shots are given, healthcare workers should "understand that girls might be anxious" about side-effects, and "provide information in an empathetic way," she added.

A 2020 study in The Lancet predicted that Japan's "HPV vaccine crisis" could result in an additional 5,000 cervical cancer deaths among girls born between 1994 and 2007, compared to if uptake had remained at 70 percent.
The health ministry is trying to minimise the damage by offering free HPV vaccines to women who missed the shot over the past nine years, when they were of target age.
University student Utako Kawakami, 20, wishes she had been vaccinated before becoming sexually active.
Her mother was wary about giving her the shot as a teen due to media reports, although she has now changed her mind.
Kawakami got her second HPV vaccine dose last year, however, and told AFP she "wasn't afraid".
"I made my decision based on data," said the 20-year-old, who now posts information about the vaccine on social media for younger followers.
The vaccine's promotion still faces some opposition, notably from women who say they suffer pain, fatigue or other conditions after being inoculated.
Several lawsuits have been filed against the government and drugmakers since 2016 over alleged side effects, but no verdicts have yet been made.
For lawmaker Mihara, who had her uterus removed after developing cervical cancer, accurate information is key to boosting the vaccination rate.
"I don't want younger people to go through what I went through," she said.
By Natsuko FUKUE
© Agence France-Presse

Tweets by @forbesindia
The legacy of CNBC-TV18's India business leader awards
Explainer: What to know about aphasia, Bruce Willis' diagnosis