The government, with public-private partnerships, should organise continuous awareness programmes of simple self-screening methods that can help in early diagnosis of the disease 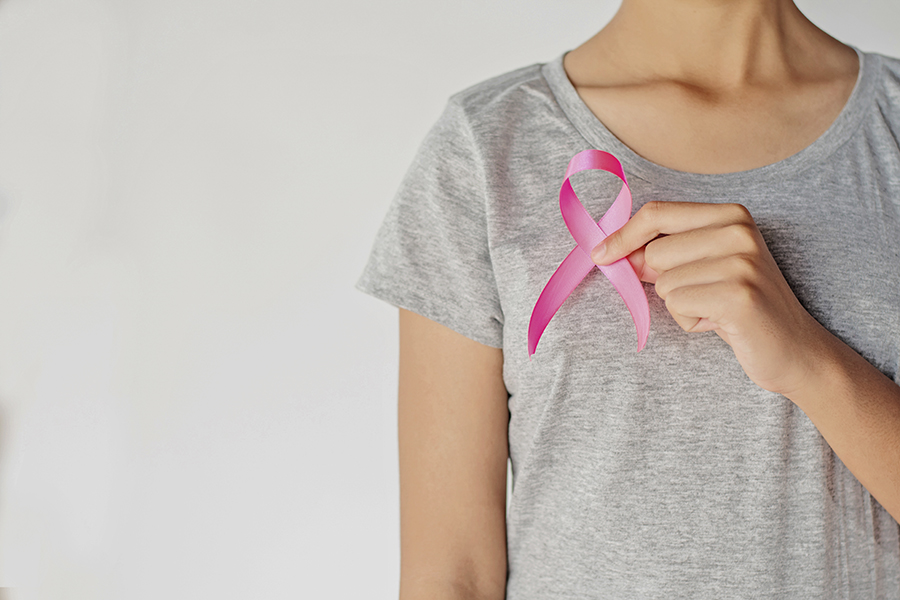 According to the survey more than 50% of these women stated a busy lifestyle as a reason for avoiding breast health, 2% were not comfortable to do this examination, while 18% didn't think this exercise was important to spent time on
Image: Shutterstock

Breast cancer is the leading cause of cancer deaths and the second most-fatal health burden in India. With over 2 million cases worldwide, there has been a sharp increase in breast cancer cases in India. According to recent reports, there are some alarming facts about breast cancer.

Breast cancer in India has surpassed cervical cancer as the most common cancer in women.

This high mortality in breast cancer has been found predominantly due to delayed diagnosis and lack of awareness.

The most distinct data was that 94 percent of the women knew about breast cancer as jargon and disease burden but only one-third of this population were aware of the diagnosis, treatment options and government schemes available for supporting and treating breast cancer patients. 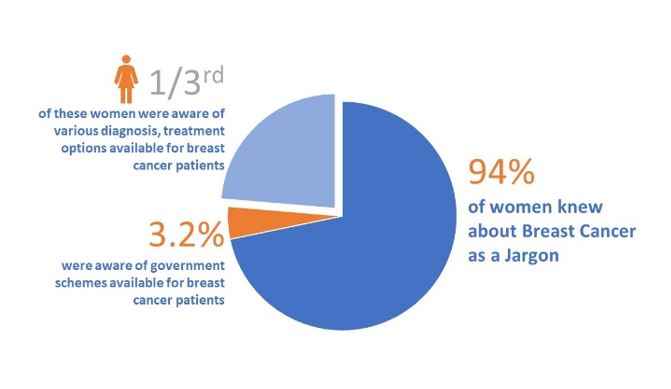 With advancements in molecular diagnostics and therapeutics, there are a lot of non-invasive prognostic bio-marker tests to detect breast cancer at a very early stage, apart from the routine mammography, Digital breast tomosynthesis (DBT), and breast biopsy techniques for the early stage. Ki67 is a protein biomarker of cell proliferation of many types of cancer. Higher levels of this marker correlate with more rapid tumor growth. Other biomarkers that indicate breast carcinomas and high tumor grade are HER2, cytokeratin (CK) CK7, CK8, CK18, CK19.

Agents that target estrogen receptor (ER) and human epidermal growth factor receptor-2 (HER2) such as tamoxifen and trastuzumab have been the most extensively used therapeutics for breast cancer along with endocrine therapy. MicroRNAs (miRs) and long noncoding RNAs (lncRNAs) are potential therapeutic targets that can change the precision medicine in cancer therapy.

The government set up the Indian Health Minister's Cancer Patient Fund (HMCPF) within the Rashtriya Arogya Nidhi (RAN) in 2009 to ensure and speed up financial assistance to needy patients. The financial assistance between 2 lakh to 5 lakh rupees has been assigned under this scheme, which goes through the 27 Regional Cancer Centres (RCC) set up across different parts of India. Some other government schemes that support cancer patients are: 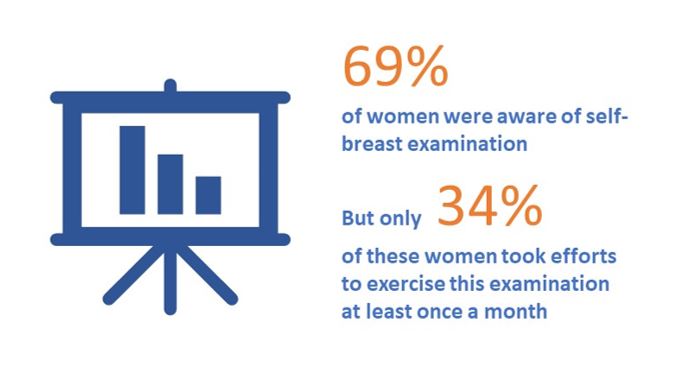 Only 3.2% of the surveyed women knew about these government schemes and RCC centers around them. A further deep dive into the data highlighted that there aren't enough campaigns about breast cancer and these government schemes on social media, which is a preferred platform for access to awareness about health for 87% of urban women. Recent government campaigns like 'Swachh Bharat Abhiyan' and 'JahaSochWahaSochalay' are excellent examples of successful social marketing drives. Such systemic efforts with strong marketing campaigns should also be executed for breast cancer awareness, with an emphasis on behaviour change among the masses. Free breast health screening for women can be added as a part of the digital health card under the 'One Nation One Health Card' scheme. As this digital platform is connected with the Aadhaar card and mobile number of a person, breast cancer awareness and free screening reminders can be sent to registered women on regular basis. This platform will also assist the government to keep a track of the initiatives and optimize the awareness camps as necessary. Public figures who are cancer survivors could be roped in for such campaigns to increase awareness and confidence. 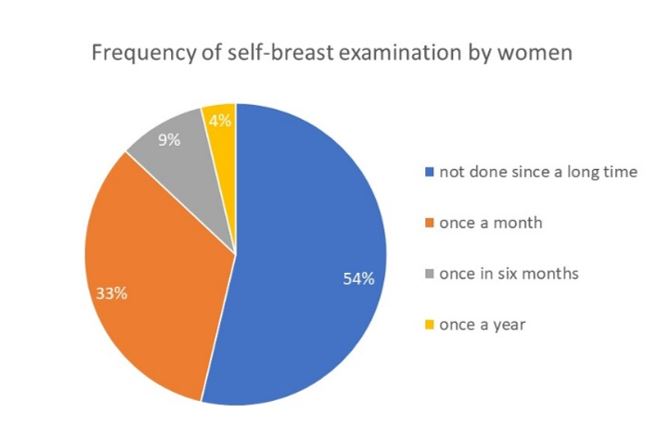 Another key insight from the survey data was that 69% of women were aware of self-breast examination, but only 34% of these women took efforts to this form of self-diagnosis at least once a month. More than 50% of these women stated a busy lifestyle as a reason for avoiding breast exams, 2% were not comfortable doing it, while 18% didn't think this exercise was important to spend time on. 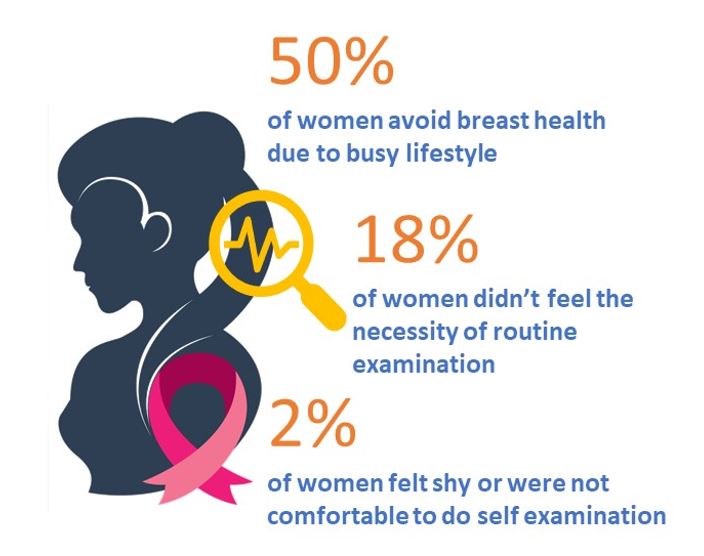 The government, with public-private partnerships, should organise continuous awareness programmes for simple self-screening methods that can help in early diagnosis of the disease. Companies like GE Healthcare, in collaboration with IndiGo, have awareness campaigns for their passengers, while Air India provides ticket concessions to cancer patients and their caregivers. Initiatives like '1 Rupee Clinic' can be an excellent platform to include and increase breast screening camps to urban and rural parts of India.

India currently spends about 15 percent of its gross domestic product (GDP) on public health expenditure, which is among the lowest in the world. Hence, it becomes important for people to get insured for financial assistance in case of such life-threatening diseases. However, the survey showed that only 24% of the women had an insurance cover for cancer-like illnesses. This provides an opportunity for health insurance companies to come up with effective strategies to support cancer patients. Private organizations can also conceptualise free or subsidized cancer insurance for urban working women.

Someone has aptly said 'When you bring attention to things, it influences how people act upon them'. It is quite evident that there is still a lot to be done around breast cancer literacy and the eradication of shyness and social stigma in India. The more we know about breast health and breast cancer, the earlier we can detect abnormalities and reduce overall mortality.

Tweets by @forbesindia
What awaits Trump if he loses? Many legal battles
How long is this going to take? Americans settle in to wait