After tackling brain cancer and sickle cell disease, this teenager is taking on Covid-19

Rutik Thorat, 19, has come up with a novel drug for sickle cell anaemia that prolongs the life of such patients, and is working on a therapy to combat Covid-19 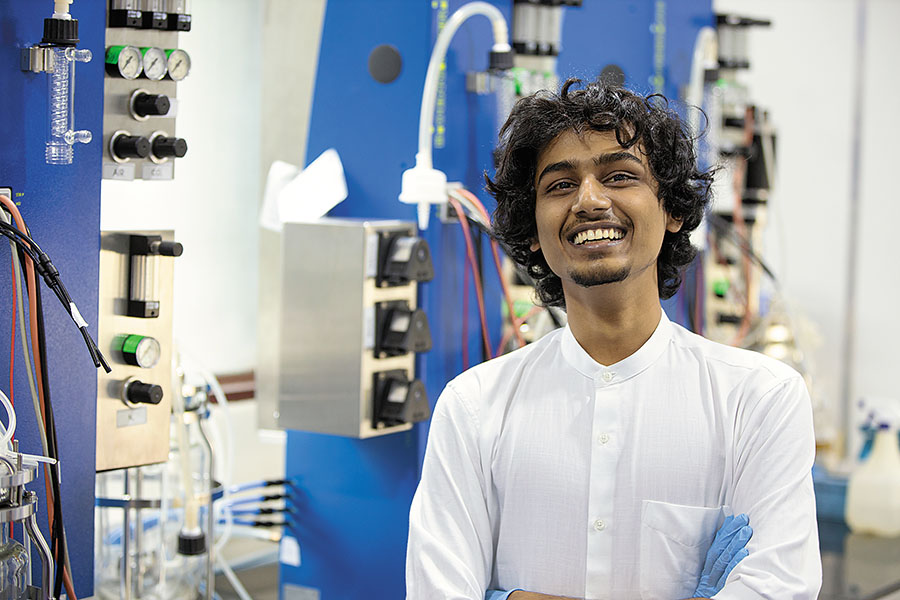 Rutik Thorat is currently working on a drug therapy for Covid-19 at HiMedia Laboratories
Image: Arpit Jain for Forbes India

Till he was eight, Rutik Thorat could not fathom why he was in and out of hospitals every two to three months. Since the age of three, the Mumbai resident was diagnosed with sickle cell anaemia—a condition where red blood cells are distorted into a crescent shape. In 2009, when he was hospitalised for close to three months because of severe jaundice, the doctors had lost hope. Thorat managed to survive, but there were more struggles lined up.

A few months later, his father passed away. Two years after that, he realised his father also had sickle cell anaemia. Thorat, then 11 and undergoing treatment for the same, was in deep shock. He made it a mission to find out everything about the disease.

“I wanted to ensure no one else goes through what my father went through, and what I was enduring,” says Thorat. His family thought he was only educating himself about the disease by poring over reams of text on the subject for hours. No one realised how serious he was about getting to the bottom of it.

Today, the 19-year-old—who has taken a year-long gap after schooling and before starting his undergraduate education—is working as a student researcher with Mumbai-based HiMedia Laboratories on a novel drug that gives a pleiotropic effect for sickle cell anaemia.

Additionally since the outbreak of the coronavirus, Thorat has started working on a new drug therapy for Covid-19.

Given the number of side effects that sickle cell anaemia has, including severe brain strokes and frequent infections, he started drug hunting for the disease. “I had one advantage… since I was facing frequent hospitalisation,” laughs Thorat, “I was constantly in touch with my hematologist. I would keep pestering her with all the queries I had.”

After plenty of research, he shortlisted 11 to 12 ideas that he discussed with his hematologist, Sangeeta Mudaliar, head of department of hematology at Mumbai’s Bai Jerbai Wadia Hospital for Children. With her help, he narrowed down a novel drug therapy idea. “Currently, the drugs available in the market for sickle cell anaemia only focus on one type of therapy. My idea was to give patients multiple advantages through the drug—from boosting immunity to reducing oxidative stress,” explains Thorat.

While the youngster had complete faith in his idea, he did not know how to go about spreading the word. Thorat reached out to scientists, medical institutes and research laboratories all over the country. “I started making calls, sending emails and messages on LinkedIn, but I faced a lot of rejections and insults. Most people thought my idea was futile and being only 16 then added to my woes,” says Thorat.

Simultaneously, he started interning with the Indian Institute of Technology, Bombay’s proteomics lab—large-scale study of proteins—under the guidance of Sanjeeva Srivastava, professor and head of proteomics laboratory at the institute. He worked on glioma, a very aggressive brain tumour, for four to five months. He continued to face hurdles even after completing his internship.

“My family had no idea I was doing this. I would bunk school, stating medical reasons and roam around all of Mumbai, trying to meet scientists and medical institutes,” says Thorat. It was only after he won the IRIS National Science Fair in December 2018 in the category of cellular and molecular biology that he told his family about his research.

Juggling this with school was not easy. A typical day for him started at 7 am after which he attended school. Post that, he would do his research till 8 pm, have dinner and stay up till 3.30 am to complete his school work. Unlike other children, Thorat barely had a social life. “It is not something I feel I have missed out on,” he says.

Amid a flurry of rejections came a glimmer of hope. The teenager got an opportunity to work with HiMedia Laboratories as a student researcher. “When I first met Rutik, I just saw his deep desire to make a change in this world, especially to mitigate the suffering of millions of poor sickle patients who otherwise have no hope,” says Vishal Warke, director (R&D), HiMedia Laboratories. “I was impressed by a boy as young as him having such a good understanding of science that generally comes at a much advanced level, and that too only with training and guidance.” Since getting external funding was difficult, Warke and his team decided to internally fund Thorat’s project.
During the pandemic, Thorat used his free time to read up about the coronavirus and started drug hunting for Covid-19.

“I realised we could use a combinatorial therapy approach with the novel drugs. This will help to prevent damages to all vital organs, including lungs, in Covid-19 patients,” says Thorat, adding that this combination is likely to enhance the immune response and oxygen level in the body. Thorat and HiMedia Laboratories have recently filed a provisional patent for the drug while the in vitro studies are yet to take place.


Currently, his novel drug for sickle cell gives a pleiotropic effect which makes it different from the rest of the drugs available in the market. While other drugs are designed to give one type of benefit like reducing pain or increasing antioxidants levels, Thorat claims his drug has “all-in-one” kind of a therapy.

“The initial in vitro studies show that the drug has a long-lasting effect, and it has no reported severe side effects to date,” explains Thorat. He hopes to have the product in the market within five years. The lifespan of patients with sickle cell disease is very less, about 38 to 42 years. “I am optimistic about my results, and with my drug, I hope to give such patients a longer life,” says Thorat.   Teenpreneurs is a weekly podcast that features entrepreneurs and innovators under the age of 20. Follow it here, and if you know someone who should be on the show, fill out this nomination form