Startup pivot: From robots for solar panels to making ventilators 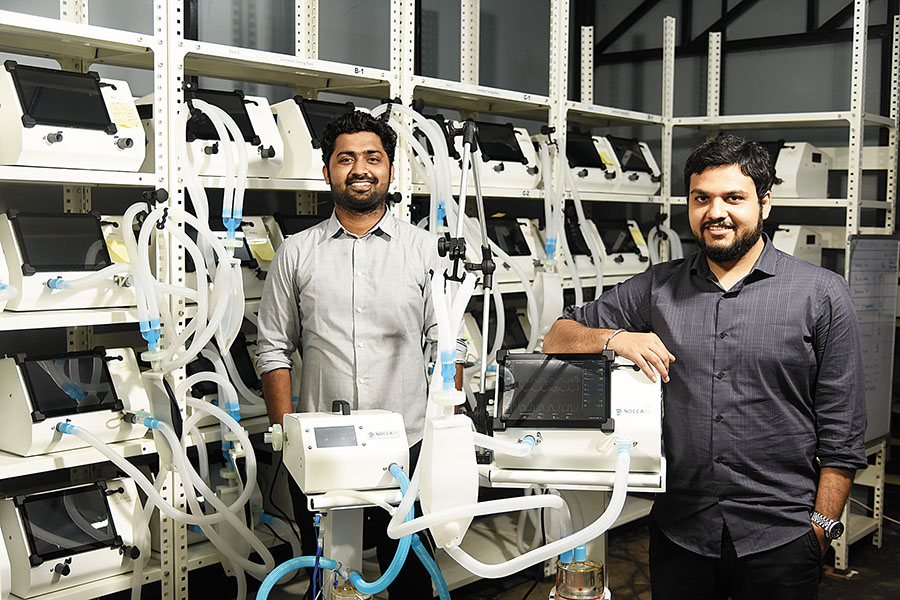 
The Covid-19 outbreak has brought untold miseries to many businesses, but the healthtech landscape has grown through it, devising ingenious mechanisms and technologies to fight the public health crisis. According to DataLabs by Inc42+’s ‘India’s Healthtech Landscape In A Post-Covid-19 World Report 2020’, the size of the healthtech market in India is likely to touch $21 billion by 2025.

While the lockdowns restricted the availability of raw materials, broke the supply chain, and made labour scarce, a number of healthtech startups augmented or revamped their existing resources to fight Covid-19. Take for instance, Telangana-based Marut Dronetech’s drones that were re-engineered to help with disinfection and surveillance across 19 districts in Telangana, or Bengaluru-based Invento Robotics that launched two robots and also raised ₹2 crore in the process.

“Our investors warned us the pandemic was here to stay and we should plan our cashflows for the next one year, and asked us to look for new opportunities,” Rathore says.

Around the same time, the director of IIT-Kanpur’s incubation centre contacted them with a list of items that would help the government fight Covid-19. After mulling over some ideas, they decided to make ventilators. “Our first concept for the ventilator was created overnight. We took it to a some doctors to further develop the idea.” says Kurele, “We decided to focus on getting the product right, even if it meant a delay in getting to the market.”

The commercial production for their ventilator—Noccarc V310—started around mid-July. “Even now, after all the validation and certification we have, we ensure every ventilator is tested at least 24 hours before it reaches the market,” says Kurele. Their facility, which was earlier used to make solar panel-cleaning robots, is now used entirely to make ventilators. “Our production capacity is 1,000 units per month. We are getting orders mostly from private hospitals or CSR wings of companies who wish to donate ventilators,” says Rathore.

The startup has received a total funding of $1.9 million so far, with most of it coming from Indian Angel Network Fund, and the rest from IIT-Kanpur and other angel investors. “After the pivot in our technology, we have seen a lot more interest in funding in the last couple of months,” says Kurele.

Along with funding, the company is also growing in revenue and team strength. From a team of 19, they now have 55 people. “Since we halted commercial sales last year for research, we clocked in less than ₹1 crore. This year we are hoping to make ₹20 crore,” says Rathore.

Seeing the rise in demand for high-flow oxygen therapy for moderately critical Covid-19 patients, Nocca has launched a low-cost High Flow Nasal Cannula (HFNC) device. “A lot of hospitals cannot afford ventilators now, we have seen a lot of demand for HFNCs from them,” says Rathore, adding that the existing ICU ventilator V310 also includes the HFNC function. The approximate cost for the Noccarc V310 ventilator is ₹4 lakh.

Now with things opening up, Nocca plans to restart and scale up operations for its cleaning robots. But at the same time, they wish to continue in the health care space. “We are looking for a bigger factory space, where we can simultaneously produce ventilators and the robots,” says Kurele.

Tweets by @forbes_india
India INClusive: LGBTQ+ inclusion at the workplace still a work-in-progress
News By Numbers: India's climb to 4 million Covid-19 cases fastest in the world