Bengaluru startup Invento Robotics, whose earlier focus was in banks and hotels, has pivoted to create robots that collect patient details, check temperatures, set up video calls with doctors and disinfect rooms 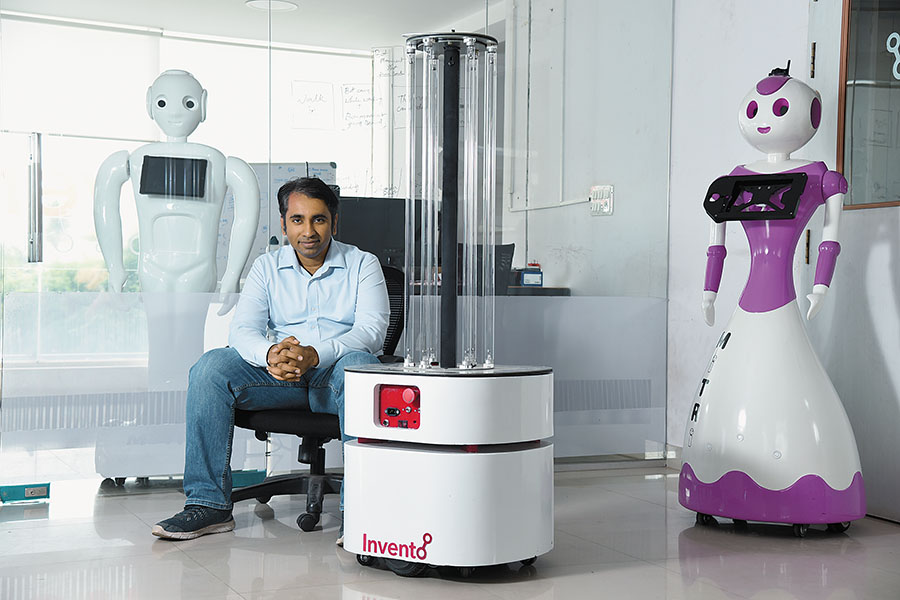 The Covid-19 outbreak has brought untold miseries to many businesses, but the healthtech landscape has grown through it, devising ingenious mechanisms and technologies to fight the public health crisis. According to DataLabs by Inc42+’s ‘India’s Healthtech Landscape In A Post-Covid-19 World Report 2020’, the size of the healthtech market in India is likely to touch $21 billion by 2025.

While the lockdowns restricted the availability of raw materials, broke the supply chain, and made labour scarce, a number of healthtech startups augmented or revamped their existing resources to fight Covid-19. Take for instance, Pune-based Marut Dronetech’s drones that were re-engineered to help with disinfection and surveillance across 19 districts in Telangana, or Bengaluru-based Invento Robotics that launched two robots and also raised ₹2 crore in the process.

Starting today, Forbes India looks at five such startups in a series. Our first look is at Bengaluru-based Invento Robotics, which started a new revenue stream during the outbreak: Robot-as-a-service.

By December 2019, Bengaluru’s Invento Robotics was set to open its first global office in Suzhou, China, and in January, Balaji Vishwanathan, its founder, was scheduled to travel to China to start operations. Then the pandemic hit.

“We were planning to delay starting operations [in China], when we began to get enquiries from the Chinese markets for our robots to help fight the pandemic,” says Vishwanathan. “By late January, we started working on a prototype. By March, when it was ready, the pandemic had reached India, so we could use our robots here.” Following the border tensions between India and China, Vishwanathan and his co-founders, COO Mahalakshmi Rudrakrushnan and CTO Bharth Kumar abandoned the Chinese market entirely.

Mitra, Invento’s flagship robot that was earlier used in hotels and banks, was modified to collect patient details, check temperatures and set up video calls with doctors, thus minimising contact with health care workers. The pilot took place in early April at Fortis Hospital in Bengaluru.

Invento launched two more robots: C-Astra and Robodoc. “C-Astra’s primary function is to disinfect rooms. Robodoc allows doctors to virtually interact with patients inside Covid-19 wards,” says Vishwanathan . There are 16 robots that have been deployed in private hospitals in Delhi, Mumbai, Bengaluru, Chennai and Indore, with plans to deploy 20 more by September.

Invento’s team has been struggling to meet the sharp rise in demand. Although most of their components are locally sourced, production is severely hit since a few critical parts are imported. “We had to get essential service passes for us and our suppliers, some of who were in containment zones. So we had to redo our designs with available components,” says Vishwanathan. Each robot needs about 200 components from over 20 suppliers, and costs ₹8-10 lakh. Invento says there has been a 6x increase in bookings compared to last year.

During the outbreak, the company started another revenue stream: Robot as a Service. “This is hiring a robot as an employee. The robots are owned by Invento, but the hospital is charged ₹50,000 per month for operating each of them,” says Vishwanathan.

Invento was set up 2016, and raised ₹4.6 crore last year. “We have seen a lot of interest from investors. In fact, during the pandemic we have closed another round of funding, raising ₹2 crore,” says Vishwanathan. Invento clocked in a turnover of ₹1.7 crore last year, and is hoping to make ₹7 crore this year, given the visibility it has received. A lot of it has been in the US, Australia and the Middle East. “Pre-Covid-19, 100 percent of our revenues was from India. Now, it is 50:50. Going forward, we expect the ratio to be skewed towards exports,” he adds.