India's pharmaceutical firms reported strong earnings growth for the June-ended quarter, led by higher sales of drugs for chronic ailments and strong business for the API segment. The outlook for coming quarters remains positive, though margins might ease 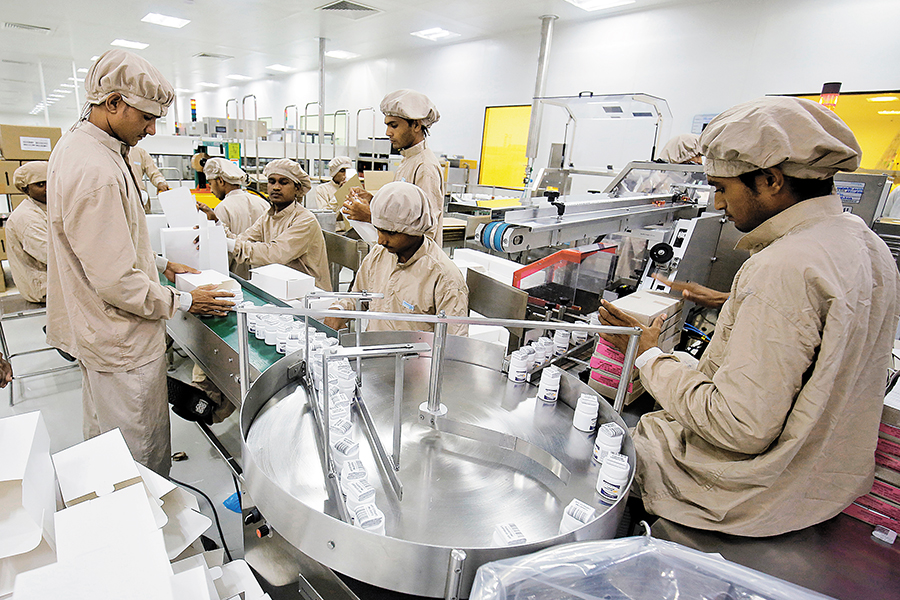 Credit rating agency ICRA has revised its outlook for the Indian pharmaceutical industry to ‘stable’ from ‘negative’ at the start of the year
Image: Amit Dave / Reuters


As the country battles the Covid-19 pandemic, India’s pharmaceutical industry and health care services have been in the spotlight. In that scenario, pharma has been one of the few sectors to have expanded during the lockdown and even after the restarting of the economy.

Companies such as Ipca showed improved sales and profitability led by its exports formulations and APIs (active pharmaceutical ingredient) business which jumped by 72 percent year-on-year (y-o-y). The demand for malaria drug Hydroxychloroquine Sulfate (HCQ) to treat Covid-19 had led the momentum in APIs for Ipca.

Dr Reddy’s, another significant player in the API space, which partners with global pharma companies across the United States, Europe, Latin America, Japan and China, saw an 88 percent jump in its pharmaceutical services and API business, totalling ₹855.3 crore, in the three months to June.

A visible element of the earnings was also a rise in margins, as pharmaceutical companies were able to lower their operational expenses in the past three months. This was across segments where companies managed to cut their travel expenses, marketing and advertising costs and on-the-ground expenditure, says Isha Chaudhary, director at Crisil. All of these boosted margins and profits (see earnings table). 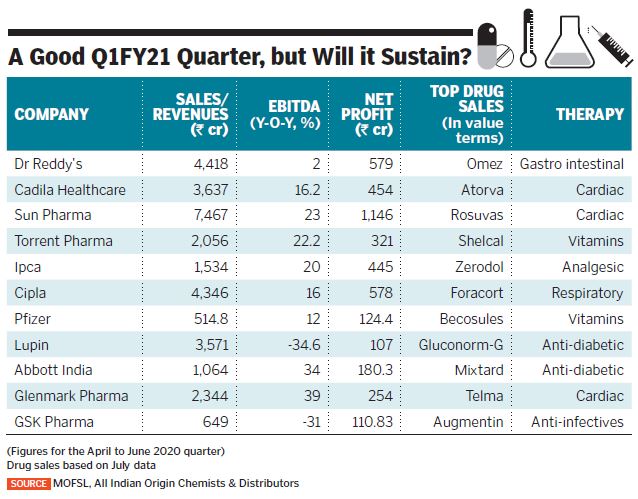 Crisil calculates the total revenue of their basket of 14 pharma companies to have dipped marginally by 2 percent from the year ago figure, while Ebitda margins have expanded by nearly 100 basis points, mainly due to improved realisations of value-added products to regulated markets.

The improved profitability and prospects of higher growth have reflected in stock market prices too. The Nifty Pharma index—at 11,537.9 on August 19—is at a four-year high. It last touched similar levels in August 2016.

Growth in medicine spends
It is now a given that medicine spending in India will pick up, as will the need for regular health care testing at private and public laboratories in the post-Covid-19 world. Credit rating agency ICRA has revised its outlook for the Indian pharmaceutical industry to ‘stable’ now from a ‘negative’ rating at the start of the year. ICRA has forecast an 8 to 11 percent CAGR in the FY20-23 period, led by growth in the domestic markets. 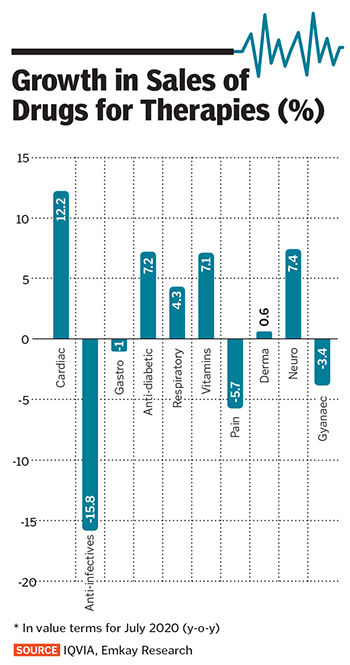 Crisil’s Chaudhary suggests that the sector could grow by 8 to 9 percent in FY21. “While domestic sales will rise at 5 to 6 percent, exports are likely to see a 10 to 12 percent jump in revenues (also helped by currency depreciation),” she tells Forbes India. Commenting on the sector’s performance during the lockdown, she said pharma companies saw sharp growth led by a 15 percent growth (in April-May) in value terms in formulations business and in bulk drugs.

Siddharth Khemka, head-retail research of Motilal Oswal Financial Services, says: “Favourable demand for pharmaceutical services and APIs, new launches in formulations and better penetration for intermediaries, and a strong presence for a few in the chronic segment of illnesses, have all led to an improved quarter of growth for pharma companies.”

In the case of therapies where sales were the highest, there was stocking up, at an individual, corporate and government level, to ensure that despite the supply chain disruptions during the lockdown, these drugs were always made available to patients.

Global innovators are trying to gradually shift their focus from China to markets like India, which has led to an increase in the API business. And analysts are confident that the outlook for pharma companies’ earnings will continue to be bright because of this.

Currently, about 65 percent of the raw material for Indian drug makers is being sourced from China, often used for tuberculosis and vitamin medicines. But there is a conscious move by India to reduce its dependence on imports of APIs from China. This could be done by looking for alternatives to China or increasing the domestic production. “India will never be able to reduce imports to zero… but we can definitely increase our own market share, as an alternative player,” Khemka adds. 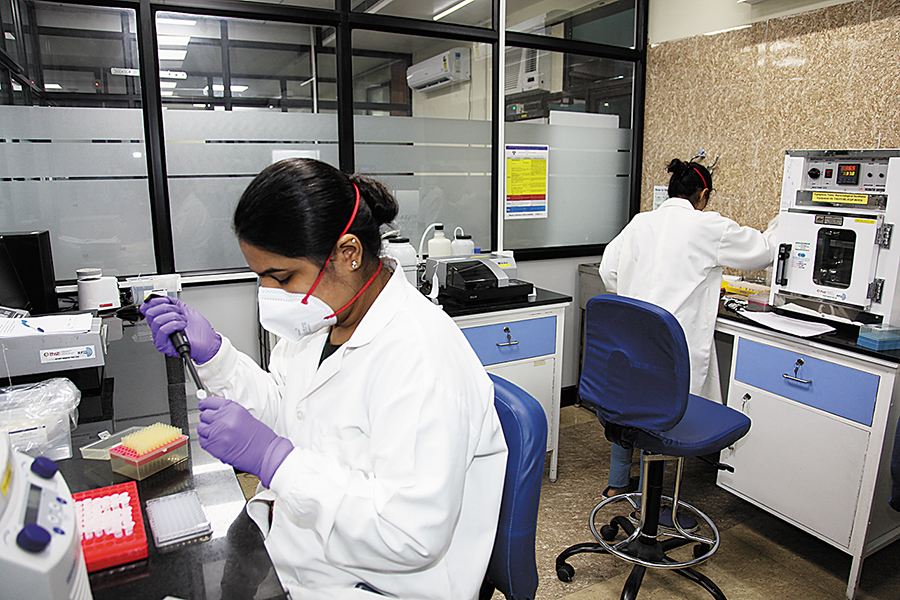 Private diagnostic labs saw their earnings dip as people did not visit clinics for tests during the lockdowns. The business is unlikely to pick up till Q4FY21
Image: Pallava Bagla / Corbis Via Getty Images

The ministry of pharmaceuticals in June released the guidelines for a production-linked incentive (PLI) scheme to kick-start the domestic manufacturing of key APIs and key starting materials (KSM) in India. This gives details of the API or KSM to be manufactured, the minimum production level, investment to be made, applicants to be selected per category and the rate of incentive.

Improved Earnings Estimate
Improved sales and profitability have reflected in the prices of pharma stocks. The Nifty Pharma index has by risen 43.3 percent year-to-date in 2020 and 12 percent in the past month, outperforming most other sectors. “Pharmaceuticals was an under-owned sector in recent years. But due to the lockdown and sluggish business activity, very few sectors—barring IT and pharma—were reporting growth,” says Khemka. The under-owning changed rapidly in the last four months and Aurobindo Pharma, Sun Pharma, Torrent Pharma, Cipla, Divis Labs, Dr Reddy’s Labs and Lupin all scaled their 52-week highs recently.

As growth expands, several pharma companies are likely to get a fresh re-rating, particularly as institutional investors have started to accumulate these stocks. With higher sales, improved cash flows, low levels of debt and higher corporate governance, Khemka says the pharma sector has emerged a near- to medium term favourite for investors. Q2FY21 and Q3 will continue to show improved earnings, he says, in the backdrop of the USFDA having granted approvals for more plants and products to be manufactured. 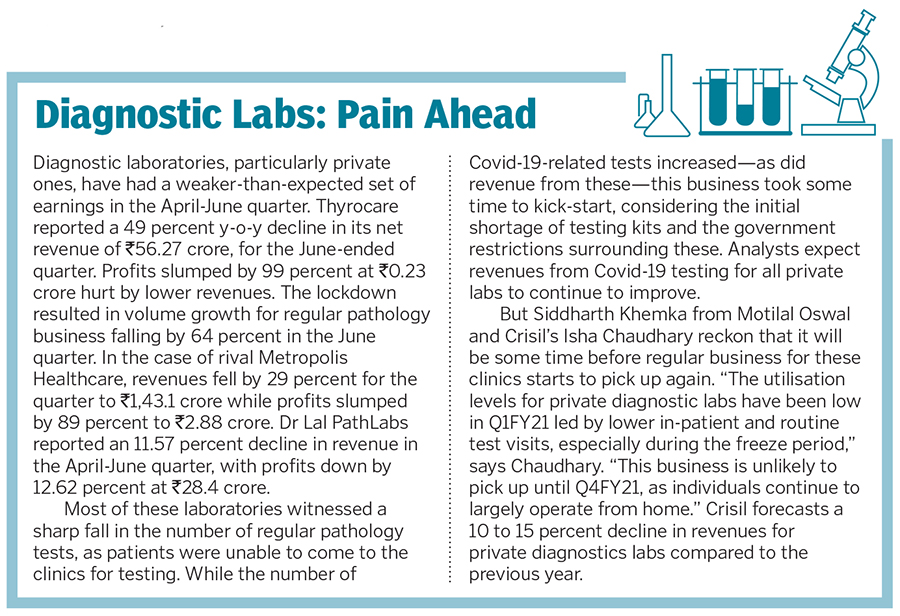 The only negative that might emerge in the coming months is that pharma firms are unlikely to sustain the high margin growth seen in the last quarter. Crisil’s Chaudhary feels that Ebitda growth will contract and could be range-bound in the coming quarters. “Expenditure control achieved during a freeze period isn’t sustainable throughout the year,” she says.

The focus in the near-term will, however, shift towards the research Indian manufacturers have been carrying out for a Covid-19 vaccine. At least five Indian manufacturers are in the race, led by the Serum Institute of India for the Oxford University vaccine, followed by Bharat Biotech, Zydus Cadila, Gennova Biopharmaceuticals and Biological E, which are in various stages of research or boosting manufacturing capacity.

“In the post-Covid19 world, India—the fifth largest manufacturer of vaccines in the world—could gain in business through existing partnerships. There is potential for an upside here,” says Chaudhary. [The vaccine market share in the Indian pharmaceutical industry is at just 3 percent.] Vaccine manufacturing capacity and successful trials could add a further 30 to 50 basis points to revenue estimates, analysts say.