In Vienna, the OPEC+ group decided to add 648,000 barrels per day to the market in July, up from the 432,000 bpd increases in recent months, and a shift from the cartel's recent stance of sticking to a planned pace of monthly production hikes 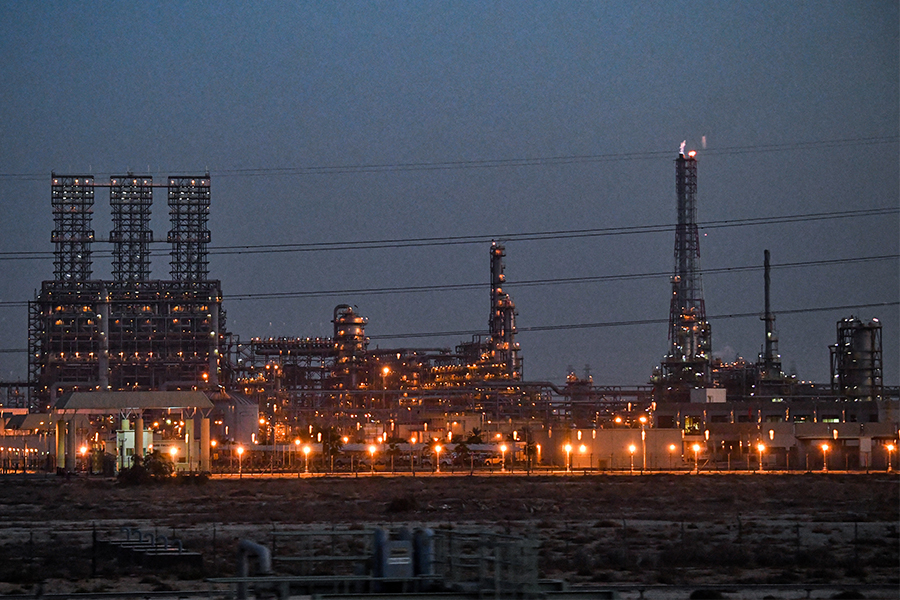 This picture shows a view of a refinery at the Jubail Industrial City, about 95 kilometres north of Dammam in Saudi Arabia's eastern province overlooking the Gulf. (Credits: GIUSEPPE CACACE / AFP​)

Oil prices rose Thursday despite an agreement by major crude producers to boost output more than expected, while US stocks rallied ahead of closely-watched employment data seen as a key input to the inflation debate.In Vienna, the OPEC+ group decided to add 648,000 barrels per day to the market in July, up from the 432,000 bpd increases in recent months, and a shift from the cartel's recent stance of sticking to a planned pace of monthly production hikes.
"The meeting highlighted the importance of stable and balanced markets for both crude oil and refined products," the group said of the move.
The announcement came after European Union leaders agreed to ban more than two-thirds of Russian oil imports as part of a sixth package of sanctions on Moscow over the Ukraine war.

But the action by producers did not appear to be enough to calm oil markets, with futures contracts rising more than one percent.
The jump in prices reflects "doubts the cartel members can deliver on their promises," TD Securities' Bart Melek said in a note.
He who warned that oil prices could spike "well above" $120 a barrel in the peak summer period amid tight inventories, geopolitical risk and uncertainty over OPEC.
Meanwhile, Wall Street stocks pushed higher after two down sessions in which worries over inflation stymied buying.
Payroll services firm ADP said private US employment rose by 128,000 positions last month, far less than economists expected and well below April's total.
While the ADP data is not necessarily a harbinger of Friday's government jobs data, some market watchers think a Labor Department report showing weakening hiring and less wage pressure might be welcomed by investors.
"Some traders expect to see cooler labor demand, which could slightly ease some inflation worries," Oanda's Edward Moya said.
European shares also closed higher, with Paris leading the way at 1.3 percent and Frankfurt rising 1.0 percent. London's FTSE 100 was shut for a holiday.
Equities fell in Asia as traders grow increasingly worried that central bank moves to rein in inflation could tip economies into recession.
Hong Kong shed one percent, while Tokyo, Sydney, Seoul, Singapore, Wellington, Manila, Jakarta and Taipei were well down. Shanghai and Mumbai edged up.
Large tech companies had a banner session on Wall Street, with Amazon and Google-parent Alphabet each winning 3.2 percent, while Netflix jumped 6.3 percent.
Dow-member Microsoft fell short of those levels but still gained 0.8 percent, despite lowering its profit and sales outlook due to the hit from the strong dollar.
Boeing was another standout, jumping 7.5 percent after the head of Delta Air Lines said the carrier was hoping for a deal to buy planes from the aviation giant.
© Agence France-Presse

Tweets by @forbesindia
US Federal Reserve's Lael Brainard says pause in rate hikes unlikely
Rate hike: Not a question of 'if' but 'how much'