Orbital Flight Test-2 (OFT-2) was the last hurdle for Starliner to clear before it carries humans in another test flight due to take place by the end of this year. If that succeeds, the spaceship will begin regular service 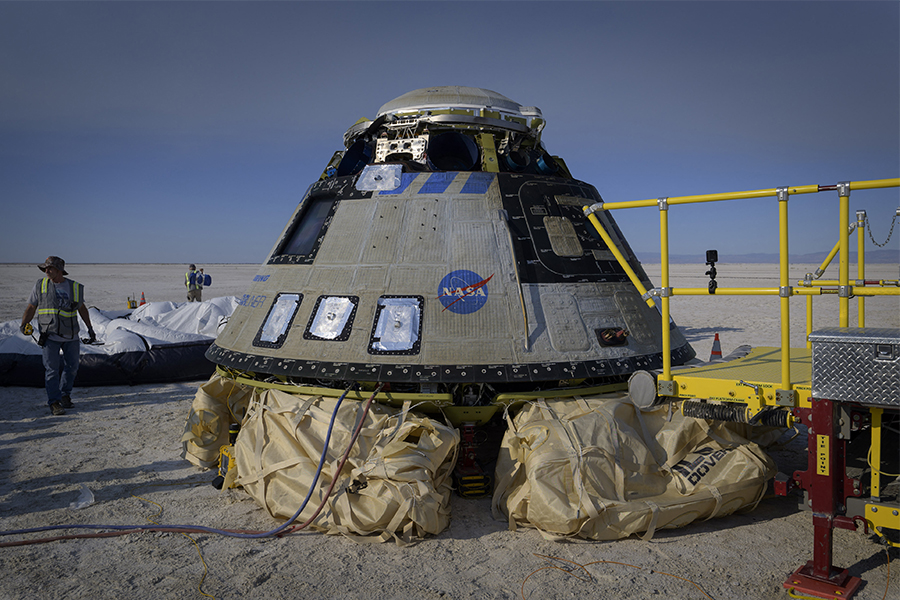 In this handout image courtesy of NASA, Boeing and NASA teams work around Boeing’s CST-100 Starliner spacecraft after it landed at White Sands Missile Range’s Space Harbor, May 25, 2022, in New Mexico. Boeing's Starliner capsule returned to Earth Wednesday in the final step of a key uncrewed test flight to prove itself worthy of providing rides for NASA astronauts to the International Space Station. (Credits: Bill INGALLS / NASA / AFP​)

Boeing's Starliner capsule returned to Earth Wednesday in the final step of a key uncrewed test flight to prove itself worthy of providing rides for NASA astronauts to the International Space Station.
The gumdrop-shaped spaceship landed in a puff of sand at 4:49 pm local time (2249 GMT) in the New Mexico desert, wrapping up a six-day mission crucial to restoring Boeing's reputation after past failures.
"Just a beautiful touchdown in White Sands this evening," said an announcer on a NASA live feed, as ground control reacted with applause, and a recovery team raced to the landing site.

Orbital Flight Test-2 (OFT-2) was the last hurdle for Starliner to clear before it carries humans in another test flight due to take place by the end of this year. If that succeeds, the spaceship will begin regular service.
Addressing reporters at a post-touchdown briefing, NASA's Steve Stich, who oversees the commercial crew program, summed up: "We have a few things to work on...but I don't really see any showstoppers."
"We really do have the crewed flight test next on our focus," he added.
NASA is looking to certify Starliner as a second "taxi" service for its astronauts to the space station—a role that Elon Musk's SpaceX has provided since succeeding in a test mission for its Dragon capsule in 2020.
Both companies were awarded fixed-price contracts—$4.2 billion to Boeing and $2.6 billion to SpaceX—in 2014, shortly after the end of the Space Shuttle program, during a time when the United States was left reliant on Russian Soyuz rockets for rides to the ISS.

Starliner docked with the orbital outpost on Friday, a day after blasting off from the Kennedy Space Center in Florida.
Over the weekend, astronauts living aboard the station opened the hatch and "greeted" the capsule's passengers: Rosie the Rocketeer, a mannequin equipped with sensors to see what astronauts would have experienced, and a plush toy named Jebediah Kerman, the ship's zero-g indicator.
The spacecraft brought back more than 600 pounds (270 kilograms) of cargo, including tanks that provide breathable air to station crew members, which will be refurbished and taken back up on a future flight.
As it flew over the Pacific Ocean, Starliner initiated a de-orbital maneuver, and then ejected its expendable service module, leaving the remaining crew module to withstand temperatures of around 3000 degrees Fahrenheit (1650 Celsius) during atmospheric re-entry.
Having shed most of its velocity, it deployed a sequence of parachutes culminating in its three giant main chutes, colored red, white and blue. At 3,000 feet (915 meters), it jettisoned its base heat shield—revealing airbags that inflated to aid a gentle landing.
The mission wasn't without its hiccups, which NASA and Boeing teams are now going to probe thoroughly in case they could cause future problems.
Early on, two thrusters responsible for placing Starliner in a stable orbit failed, though officials insisted there was plenty of redundancy built into the system to overcome the problem.
On the day of docking, the vessel missed its scheduled contact time by more than an hour, after a ring responsible for latching on to the station failed to deploy correctly. Engineers had to retract the ring and pop it out again before it worked the second time.
After touchdown, recovery teams detected hydrazine vapor around Starliner and had to back off until it cleared. Stich later explained that this sometimes occurs when a spaceship doesn't burn all its propellant, and there was no evidence of a leak.

Overall, the glitches were minor compared to the troubles Starliner saw during its first test launch, back in 2019, when one software bug caused it to burn too much fuel to reach its destination, and another almost meant that the vehicle was destroyed during re-entry.
The second error was caught in time to upload a patch, and the vessel was able to land safely at White Sands Space Harbor—the same spaceport where the Space Shuttle Columbia once landed, and where Starliner touched down once more on Wednesday.
Boeing and NASA also tried to launch Starliner in August 2021, but the capsule was rolled back from the launchpad to address sticky valves that did not open as they should.
On Wednesday night, however, both NASA and Boeing officials were all smiles.
"There's lots of emotion," said Mark Nappi of Boeing. "(I'm) really happy for this team of people who have been working on this for years, and waiting for today."
By Issam AHMED
© Agence France-Presse