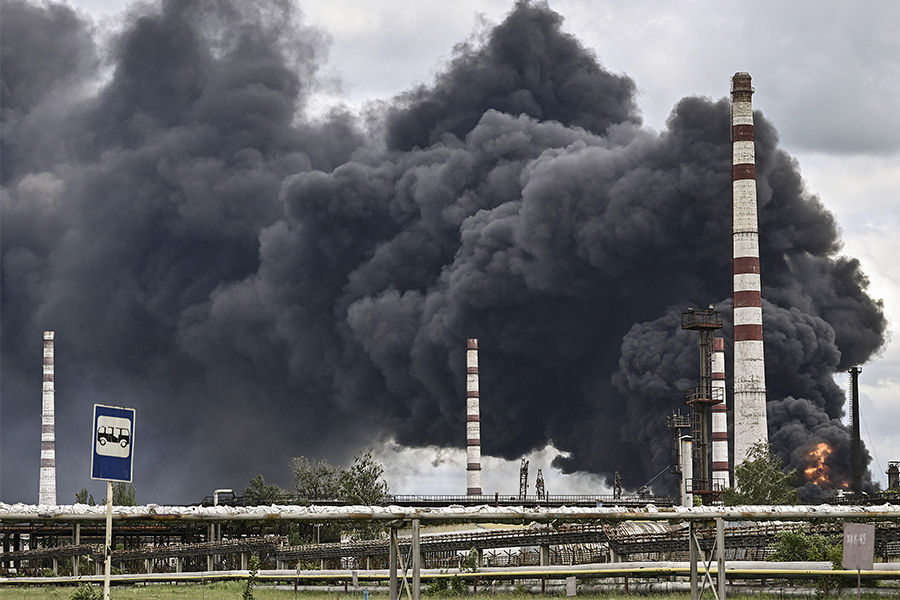 Smoke rises from an oil refinery after an attack outside the city of Lysychans’k in the eastern Ukranian region of Donbas, on May 22, 2022, on the 88th day of the Russian invasion of Ukraine. (Credits: ARIS MESSINIS / AFP)

European Union leaders have agreed to ban more than two-thirds of Russian oil imports, tightening economic screws on the country even as Moscow's forces press their offensive in Ukraine's eastern Donbas region.
The compromise deal reached late Monday, meant to punish Russia for its invasion three months ago, cuts "a huge source of financing for its war machine," European Council chief Charles Michel tweeted.
"Maximum pressure on Russia to end the war," he said.
Leaders of the 27-nation bloc had met to negotiate the long-sought deal earlier Monday in Brussels, amid concerns raised by Hungary and other neighboring countries reliant on Russian fuel.
The agreement also includes plans for the EU to send nine billion euros ($9.7 billion) in "immediate liquidity" to Kyiv, Michel announced.
Hours earlier, Ukrainian President Volodymyr Zelensky had called an oil embargo the "key point" to any sanctions package.

"I believe that Europe will have to give up Russian oil and oil products in any case, because this is about the independence of Europeans themselves from (weaponised) Russian energy," he said in his daily address to the nation.
The Netherlands and Denmark on Tuesday were expected to join the growing list of European countries who have seen their gas shipments halted after refusing to pay Russian giant Gazprom in rubles, a demand meant to sidestep crippling Western sanctions.
On the ground, Russian forces were making incremental gains in the Donbas region, including the industrial city of Severodonetsk, where they were edging closer to the city centre.
"The situation in Severodonetsk is as complicated as possible," Lugansk regional governor Sergiy Gaiday said on Telegram, saying the entire region was under continuous bombardment—"air bombs, and artillery, and tanks. Everything".

As Europe announced its new sanctions on Moscow, Washington was taking a cautious line regarding weaponry for Ukraine.
Ukraine has received extensive US military aid, with legislators approving another $40 billion assistance package in May.
But US President Joe Biden said he would not send rocket systems that could hit Russian territory, despite urgent requests from Kyiv for exactly that.
"We are not going to send to Ukraine rocket systems that can strike into Russia," Biden told reporters in Washington.
His comments came as new US ambassador to Ukraine Bridget Brink—filling a position vacant since 2019—and French Foreign Minister Catherine Colonna both arrived in Kyiv.
France will "continue to reinforce arms deliveries," Colonna said at a news conference with her Ukrainian counterpart Dmytro Kuleba.
The highest-ranking French official to visit the capital since Russia's invasion began February 24, Colonna also visited Bucha, near Kyiv, where Russian troops have been accused of committing war crimes against civilians.
"This should never have happened," Colonna told reporters after visiting an Orthodox church in the town. "It must never happen again."
Her visit came as a French journalist was killed while working in Ukraine.
Frederic Leclerc-Imhoff was "on board a humanitarian bus" when "he was mortally wounded," French President Emmanuel Macron said on Twitter.

Participants in Monday's EU summit hatched a compromise deal that exempts deliveries by pipeline from the oil import ban, after Hungarian President Victor Orban warned halting supplies would wreck the country's economy.
EU chief Ursula von der Leyen said the ban "will effectively cut around 90 percent of oil imports from Russia to the EU by the end of the year".
Michel said the sanctions also involved disconnecting Russia's biggest bank, Sberbank, from the global SWIFT system, banning three state broadcasters and blacklisting individuals blamed for war crimes.
Russia's Gazprom, meanwhile, was set to halt gas supplies to the Netherlands on Tuesday, with Denmark likely to see the tap turned off as well.
The Netherlands' partly state-owned energy firm GasTerra revealed the looming shut-off Monday, saying it would not comply with payment requirements that breach EU sanctions.
Moscow has demanded clients from "unfriendly countries"— including EU member states—
pay for gas in rubles as it attempts to avoid Western financial sanctions.
Danish energy company Orsted also warned its gas shipments could be cut off when a May 31 payment deadline passed.
Russia has previously halted deliveries to Finland, Bulgaria and Poland, a move blasted by the EU as "blackmail".

With Russia facing the oil import ban, a Georgian breakaway region delivered another blow to Moscow's hopes for further unity among local allies, with the leader of South Ossetia scrapping a planned July referendum on joining Russia.
The Moscow-controlled enclave's president, Alan Gagloev, warned Monday about "uncertainty of the legal consequences of the issue submitted to a referendum."
Since failing to capture Kyiv in the war's early stages, Russia's army has narrowed its focus, hammering Donbas cities with relentless artillery and missile barrages.
But Ukrainian forces are pushing back in the southern region of Kherson, the country's military leadership has said.
On Monday, Ukraine's southern command centre said they had driven Russian troops from the village of Mykolayivka.
A day earlier, the army claimed to have pushed Russian forces into "unfavourable positions" around the villages of Andriyivka, Lozovo and Bilohorka, forcing Moscow to send reserves to the area.
By David Stout, with Julien Girault in Brussels
© Agence France-Presse