The southern city was hit by a series of missiles Monday, destroying buildings, setting ablaze a shopping centre and killing one person, its city council said, just hours after a visit by European Council President Charles Michel 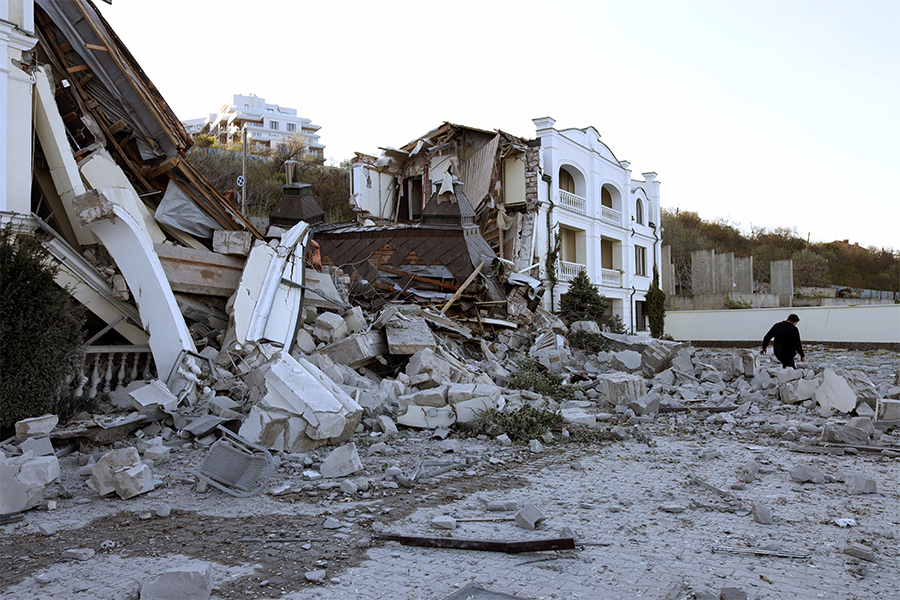 A man walks past beach hotel destroyed in Ukrainian city of Odessa on May 8, 2022, amid the Russian invasion of Ukraine.​​ (Credits: OLEKSANDR GIMANOV / AFP)

Kyiv, Ukraine: Russian forces intensified their fight in Ukraine's east and fired missiles over the port city of Odessa, as President Joe Biden signed a law speeding up arms deliveries to Kyiv.
The southern city was hit by a series of missiles Monday, destroying buildings, setting ablaze a shopping centre and killing one person, its city council said, just hours after a visit by European Council President Charles Michel.
As Russia stepped up its fight to seize Ukraine's east, US President Joe Biden resurrected a World War II measure to aid Kyiv, opening the spigots on artillery, anti-aircraft missiles, anti-tank weapons and other powerful Western materiel.
The United States has sent some $4 billion in military aid to Ukraine already but "caving to aggression is even more costly," Biden said as he signed the act, passed with unusual bipartisan support.

Missiles earlier rumbled through Moscow's Red Square as Russia's President Vladimir Putin sought to channel national pride on the anniversary of the defeat of Nazi Germany into support for a war that has killed thousands and sent millions into exile.
On the ground in Ukraine, the governor of Lugansk reported "very serious battles" in the frontline areas of Bilogorivka and Rubizhne.
An AFP team reported seeing columns of trucks filled with soldiers and heavy equipment move down the main road leading away from the city of Severodonetsk—one of its last eastern strongholds against Russia—suggesting Ukraine was pulling back from some parts of the front.
In the devastated southern port of Mariupol, pro-Russian separatists feted Victory Day, with leader Denis Pushilin and residents carried a giant black and orange ribbon of Saint George —a symbol of WWII celebrations in Russia—through a city that has seen some of the heaviest fighting since the invasion on February 24.
Full control of Mariupol would allow Moscow to create a land bridge between the Crimean peninsula, which it annexed in 2014, and eastern regions run by pro-Russian separatists.
Some have speculated that Putin was seeking to achieve that goal in time for Victory Day, but a small contingent of depleted Ukrainian forces continued their defence of a final bastion at the Azovstal steelworks.

In his speech in Moscow, the Russian leader blamed the West and Ukraine for the two-and-a-half-month conflict, telling the parade that his country faced an "absolutely unacceptable threat" and warning against the "horror of a global war".
"You are fighting for the Motherland, for its future, so that no one forgets the lessons of the Second World War," he said.
The celebration in Red Square also featured some 11,000 troops and more than 130 military vehicles, although a planned military flypast was cancelled.
"Putin conducts politics so well, well done to him. He makes sure that our boys don't die, that there is as little blood as possible. I bow down to him," added Taisiya Chepurina, 81, whose husband fought in the Battle of Stalingrad in 1943.
But Ukrainians and Western powers accused Putin of exploiting the anniversary, with protesters in Warsaw tossing blood-red paint on the Russian ambassador, chanting "fascists!" and hoisting a Ukrainian flag, as he visited a cemetery.
Ukrainian leader Volodymyr Zelensky also invoked the ghosts of World War II, chiding Russia for claiming sole credit for winning.
"We will not allow anyone to annex this victory. We will not allow it to be appropriated," he said in a video speech shortly before Putin spoke.
In Kyiv the commemoration day was largely shunned as life slowly returned to normal, weeks after fierce fighting raged in its suburbs.

Camps in the east?

Still facing the brunt of the fighting are Ukraine's civilians, with the country reeling from a Russian attack on a school over the weekend that killed 60 people.
And the Pentagon said Monday it has seen indications that those caught up in Russia's invasion are being forcibly removed from their homeland.
"I can't speak to how many camps or what they look like," Pentagon spokesman John Kirby told reporters when asked about statements from Kyiv that some 1.2 million Ukrainians were being sent across the border and placed in camps.
"But we do have indications that Ukrainians are being taken against their will into Russia," Kirby said. He called these actions "unconscionable" and "not the behaviour of a responsible power."
The deportation of Ukrainians from their own nation—often to isolated or economically depressed regions of Russia, according to Kyiv—is another indication that Putin "simply won't accept and respect Ukrainian sovereignty," he added.

In another step forward in building pressure on Russia, EU chief Ursula von der Leyen said she made "progress" on a proposed Russian oil embargo during talks with Hungarian Prime Minister Viktor Orban.
The populist Orban is one of Putin's closest friends in Europe and had held up the bloc's attempt to phase out Russian oil—one of the most painful measures yet taken by the West—as he pointed to economic consequences in landlocked Hungary.
But France's President Emmanuel Macron poured cold water on Ukraine's oft-repeated desire for fast-track European Union membership, saying it would take "decades".
Macron, however, suggested building a broader political bloc that could also include Britain.
One ray of hope has come from prisoner swaps.
Ukrainian soldier Glib Stryzhko, 25, was gravely wounded and captured in Mariupol in April but finally released after a secret phone call to his mother.
"After we were loaded onto the bus waiting for us, the driver said: 'Guys, you can breathe.
You are home now,'" Stryzhko told AFP from his hospital bed in Zaporizhzhia.
By David Stout with Dmitry Zaks in Kramatorsk
© Agence France-Presse