Control of Donbas would allow Moscow to create a southern corridor to the occupied Crimean peninsula. Ahead of the widely anticipated advance, Ukrainian authorities had urged people in Donbas to flee west to escape 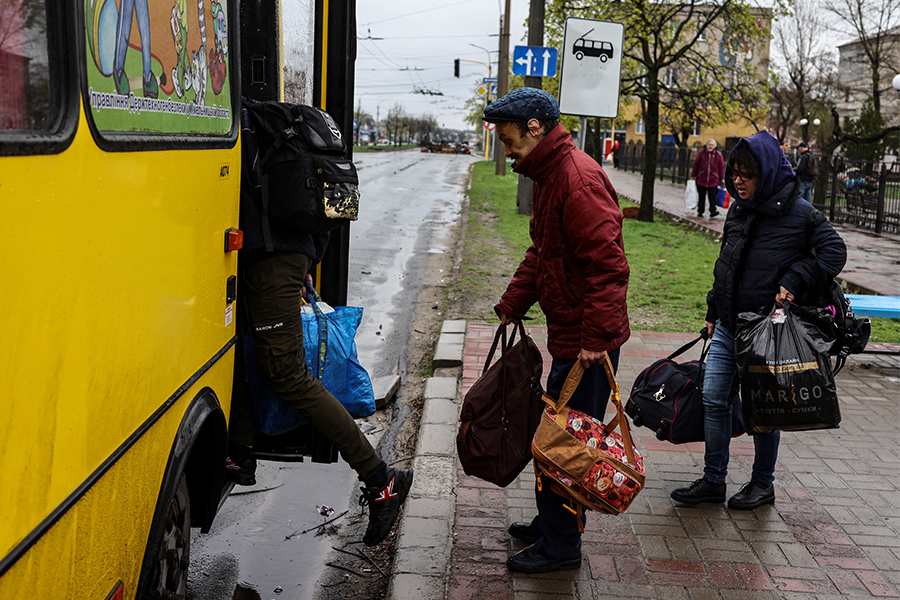 People board a bus leaving Severodonetsk, in eastern Ukraine's Donbass region, on April 13, 2022 as Russian troops intensified a campaign to take the strategic port city of Mariupol, part of an anticipated massive onslaught across eastern Ukraine. (Credit: RONALDO SCHEMIDT / AFP)

Russia has launched a major offensive into eastern Ukraine, authorities in Kyiv said, opening a new phase of its invasion after being thwarted in efforts to capture the capital.
The United States is due to hold a video meeting with allies Tuesday to discuss the conflict in Ukraine, where Moscow's military campaign has refocused on the eastern region of Donbas, partly controlled by pro-Kremlin separatists since 2014.
"We can now confirm that Russian troops have begun the battle for the Donbas, which they have been preparing for a long time," Ukrainian President Volodymyr Zelensky said on Telegram late Monday.
"No matter how many Russian soldiers are brought here, we will fight. We will defend ourselves."
Ahead of the widely anticipated advance, Ukrainian authorities had urged people in Donbas to flee west to escape.
"The second phase of the war has started," Kyiv's presidential chief of staff Andriy Yermak said.
Control of Donbas would allow Moscow to create a southern corridor to the occupied Crimean peninsula.

In the south of the region, Russia continued its push to capture the besieged port city of Mariupol, where the last remaining Ukrainian forces have taken a final stand.
But despite the desperate situation in the city, a senior US Defence Department official said Mariupol "is still contested".
Russia has also added 11 battalion tactical groups — consisting of, among other things, artillery, helicopters, and logistical support — to its forces in east Ukraine, the official added, bringing the total to 76 in the country.
Monday also saw the first shipments of a new US military aid package arrive at Ukraine's borders to be handed over in its fight against the Russian invasion.
The United States on April 13 unveiled an $800-million tranche of equipment for Ukraine, including helicopters, howitzers and armoured personnel carriers.

Moscow's forces on Monday pounded targets across the country, killing at least seven people in the far western city of Lviv.
Lviv has largely been spared bombardment since Russia invaded on February 24, and the city and its surroundings had become a haven for those seeking safety from the war zone.
But "today we understood clearly that we don't have any safe places in Ukraine. It's very dangerous," a bank employee who gave her name as Natalia told AFP after the strikes.
Russia's defence ministry said Monday it had hit 16 military targets across Ukraine.
Among the sites struck was a depot near Lviv that Moscow said held weapons recently delivered to Ukraine from the United States and Europe.
Shortly before Zelensky's address, the regional governor of the Lugansk region Sergiy Gaiday also announced the beginning of Russia's much-anticipated attack.
"It's hell. The offensive has begun, the one we've been talking about for weeks. There's constant fighting in Rubizhne and Popasna, fighting in other peaceful cities," he said on Facebook.
Russian shelling killed at least eight civilians in eastern Ukraine, according to local authorities.
Gaiday said four people died as they tried to flee the city of Kreminna in Lugansk as Russian troops moved in.
"The Russian army has already entered there, with a huge amount of military hardware... Our defenders have retreated to new positions," Gaiday said in a statement on social media.
But Ukrainian presidential advisor Oleksiy Arestovich said Russian forces had not conquered the city.
Nearby, in the village of Novodruzhesk, weary locals have borne the brunt of the fighting.
"We are bombed everywhere. It's a miracle that we're still alive," said Nadya, 65, her voice trembling.
"We were lying on the ground and waiting. Since February 24 we've been sleeping in the cellar.
"There's no more water, electricity, nothing. We've got no more money, no more petrol — we can't leave."
Ukrainian officials on Monday halted the evacuation of civilians from frontline towns and cities in the east for a second day, accusing Russian forces of having blocked and shelled escape routes.
Deputy Prime Minister Iryna Vereshchuk urged Moscow to open humanitarian corridors from Mariupol to Berdyansk and from the Azovstal metallurgical industrial zone — a holdout for Ukrainian fighters.
"Your refusal to open these humanitarian corridors will, in the future, be grounds for prosecuting all those involved in war crimes," she said on Telegram.
The Mariupol city council said Monday there are over 1,000 civilians trapped in shelters under the Azovstal steel plant, where Ukrainian forces are waging a desperate last stand against the Russians.
"(They are) mostly women with children and the elderly," they said on Telegram.

President Vladimir Putin has said he launched the military operation on February 24 to save Russian speakers in Ukraine from a "genocide" carried out by a "neo-Nazi" regime.
He recognised the independence of two self-proclaimed separatist republics in Donetsk and Lugansk shortly before the invasion began.
On Monday, Putin lauded the 64th Motor Rifle Brigade — which is accused of committing atrocities near Kyiv — bestowing battle honours on them for "heroism and valour, tenacity and courage".
Ukraine has alleged the brigade is guilty of war crimes while occupying the suburb of Bucha on the outskirts of Kyiv, where residents were shot dead, some with their hands bound.
The European Union condemned Russia's "indiscriminate" bombing of Ukrainian civilians following the strikes on Lviv.
Its foreign policy chief Josep Borrell pointed to "particularly heavy attacks" in eastern and southern Ukraine and an offensive against second city Kharkiv, where officials said Russian shelling killed three people.
"Attacks on Lviv and other cities in western Ukraine show that no part of the country is spared from the Kremlin's senseless onslaught," Borrell added.
Seeking to strengthen ties and accelerate admission to the 27-nation bloc, Zelensky said that Ukraine hoped to receive EU candidate country status within weeks.
On Monday, he handed the EU's envoy to Kyiv a two-volume response to a membership questionnaire brought by European Commission chief Ursula von der Leyen in March.
By Emmanuel Peuchot, with Alice Hackman in Lviv
© Agence France-Presse

Tweets by @forbesindia
Tiny robots are set to embark on a fantastic voyage into brains
World Bank is planning a new $170 billion crisis fund: David Malpass