Some of the atrocities may constitute war crimes, said investigators from the Organization for Security and Cooperation in Europe, who examined myriad reports of rapes, abductions and attacks on civilian targets, as well as the use of banned munitions 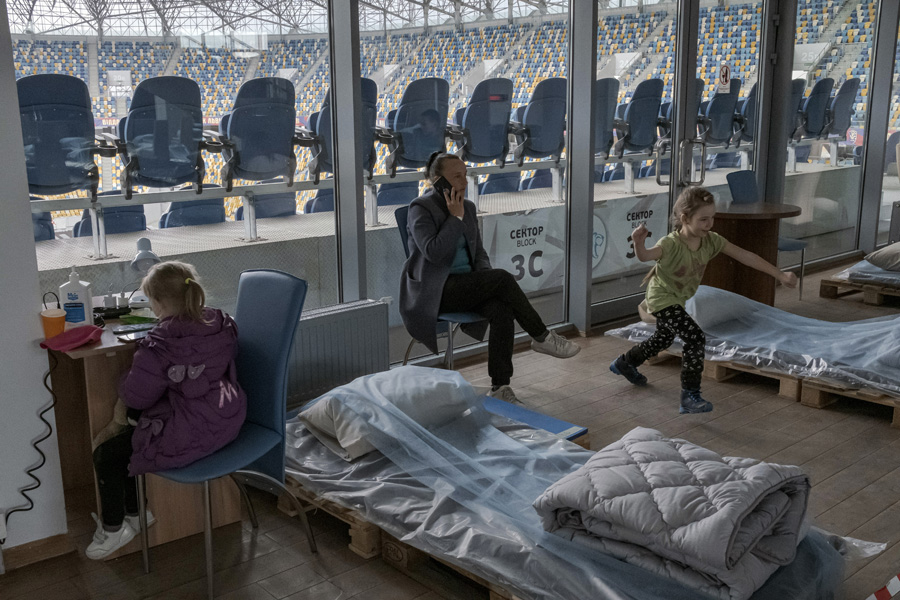 People who fled the fighting in eastern Ukraine settle into the dormitory space at a football stadium that has been converted to a reception center for internally displaced people in Lviv, Ukraine, on Tuesday, April 12, 2022. President Vladimir Putin of Russia insisted on Tuesday that his war in Ukraine would succeed and that peace talks had reached a “dead end.” (Mauricio Lima/The New York Times)

Investigators from almost a dozen countries combed bombed-out towns and freshly dug graves in Ukraine on Wednesday for evidence of war crimes, and a wide-ranging investigation by an international security organization detailed what it said were “clear patterns” of human rights violations by Russian forces.

Some of the atrocities may constitute war crimes, said investigators from the Organization for Security and Cooperation in Europe, who examined myriad reports of rapes, abductions and attacks on civilian targets, as well as the use of banned munitions.

On Wednesday, civilians were still bearing much of the brunt of the seven-week-old invasion as Russian forces, massing for an assault in the east, bombarded Ukraine’s second-largest city, Kharkiv, striking an apartment building.

In an hourlong phone call with Ukrainian President Volodymyr Zelenskyy, President Joe Biden said the United States, already a major provider of defensive armaments to Ukraine, would send an additional $800 million in military and other security aid. The package will include “new capabilities tailored to the wider assault we expect Russia to launch in eastern Ukraine,” Biden said in a statement.

U.S. officials also said Wednesday that the United States, in helping Ukraine prepare for such an assault, had increased the flow of intelligence to Ukraine’s government about Russian forces in eastern Ukraine and the Crimean Peninsula, which Russia seized from Ukraine eight years ago. The administration also is considering whether to send a high-level official to Kyiv, Ukraine’s capital, in the days ahead as a sign of support for the country, according to a person familiar with the internal discussions.

An International Criminal Court investigation into possible war crimes has been underway since last month, and a number of countries have been looking at ways for the United Nations to help create a special court that could prosecute Russia for what is known as the crime of aggression. Other possibilities include trying Russians in the courts of other nations under the principle of universal jurisdiction, the legal concept that some crimes are so egregious that they can be prosecuted anywhere.

Part of the motivation for accountability is the revulsion in Europe and much of the world over the behavior of President Vladimir Putin’s forces, including reported executions of bound civilians and other atrocities.

Still, experts warned that the process would be slow, and that any early indictments would most likely be against lower-ranking Russian officials and armed service members. Russia, which has described the accusations as fictional or unfounded, is not expected to cooperate in any prosecution.

The report released Wednesday by the OSCE, a 57-member organization based in Vienna that includes Russia, Ukraine and the United States, is one of the first in-depth studies of human rights abuses during Russia’s offensive against Ukraine.

Investigators looked at some of the most notorious attacks and other violent acts of the war, including Russia’s bombings of a theater and a maternity hospital in the besieged city of Mariupol, both depicted in the report as apparent war crimes.

They also pored through accounts of other horrific, if less visible, acts of violence. “There are allegations of rapes, including gang rapes, committed by Russian soldiers in many other regions in Ukraine,” they wrote.

But often, they were stymied.

Russia declined to cooperate with the three-person team of investigators, making it “impossible for the mission to take account of the Russian position on all pertinent incidents,” the report said.

Investigators found that Ukrainian forces, too, had been guilty of some abuses, particularly in the treatment of prisoners of war. “The violations committed by the Russian Federation, however, are by far larger in nature and scale,” their report said.

Michael Carpenter, the U.S. ambassador to the OSCE, said the report “documents the catalog of inhumanity perpetrated by Russia’s forces in Ukraine.” The European Union issued a similarly positive appraisal.

“This war is not only fought on the ground,” the bloc said in a statement. “It is clear that the Kremlin is also waging a shameful disinformation campaign in order to hide the facts of Russia’s brutal attacks on civilians in Ukraine. Reliable information and collection of facts have therefore never been as important as today.”

The Kremlin’s own mission to the OSCE dismissed the findings as “unfounded propaganda.”

On Tuesday, even as Ukrainian authorities were unearthing bodies in full view of international journalists and other observers, Putin called the atrocities a “fake” that had been elaborately staged by the West.

On Wednesday, standing near the site of two mass graves, Ukraine’s prosecutor general, Iryna Venediktova, said there was an obligation to uncover the facts and to do so in a transparent way to combat Russian disinformation.

“When you see dead bodies here, from the other side, from the Russian Federation, they say it is all fake, all this is our theater,” Venediktova said.

Ukrainian prosecutors and the newly arrived team of French experts exhumed bodies this week from mass graves in Bucha, a Kyiv suburb, where hundreds of civilians were killed during the brief Russian occupation of the area. The French government said that its team included ballistics and explosives experts and that it had the ability to do rapid DNA tests.

Evidence from the French investigation and others involving several countries will be channeled to the International Criminal Court, which started looking into possible war crimes a week after the Feb. 24 invasion. Although Ukraine is not part of the agreement that created the court two decades ago, it has granted the court authority to investigate and prosecute in this conflict.

Investigators say they are intent on showing the world the reality of the war.

“They can see everything. They can see the situation here: real graves, real dead bodies, real bomb attacks,” Venediktova said. “That’s why for us this moment is very important.”

The OSCE report described a range of subterfuge by Russian forces, including the use of Red Cross emblems, white flags, Ukrainian flags and civilian clothes. And the organization’s investigators expressed concern that both sides might be holding more prisoners than disclosed.

On Wednesday, Zelenskyy spoke directly about one of them: Viktor Medvedchuk, a Ukrainian politician and ally of Putin’s who was detained this week. Zelenskyy proposed exchanging him for Ukrainians held captive by Russian forces.

The war crimes report came amid signs that Russia’s invasion may have backfired in at least one respect. Putin has long objected to NATO’s expansion eastward into the onetime domains of the Soviet Union, describing it as a fundamental threat to Russia. But on Wednesday, two militarily nonaligned nations, Finland and Sweden, said they were seriously considering joining the alliance.

Legal experts did not rule out the possibility, some day, of an indictment of Putin, who has already been castigated as a war criminal by some Western leaders. And were Putin to be criminally charged by a court outside Russia, it would likely mean he would have to restrict his international travel in order to minimize the risk of possible arrest were he to venture beyond Russia’s borders.

David Crane, a legal scholar at Syracuse University who was the chief prosecutor for the Special Court for Sierra Leone, an international war crimes tribunal that convicted former Liberian President Charles Taylor, said he was confident that the International Criminal Court or some other judicial body would find legal grounds to charge the Russian president.

And even if Putin is never arrested and remains the leader of Russia, he said, the legal and diplomatic consequences of a war crimes indictment would severely undermine his credibility.

It would be as if “there’s like an ash mark on his forehead,” Crane said. “There’s no good options for him.”

Tweets by @forbesindia
Feeling lazy about everything? You could be in 'goblin mode'
Notre Dame slowly reviving three years after the fire