Zelenskyy's comments on a chemical attack came after Eduard Basurin, a spokesperson for the Kremlin-backed, separatist Donetsk People's Republic, said on Russian television that Russia should bring in "chemical forces" to use in Mariupol, the besieged southern city 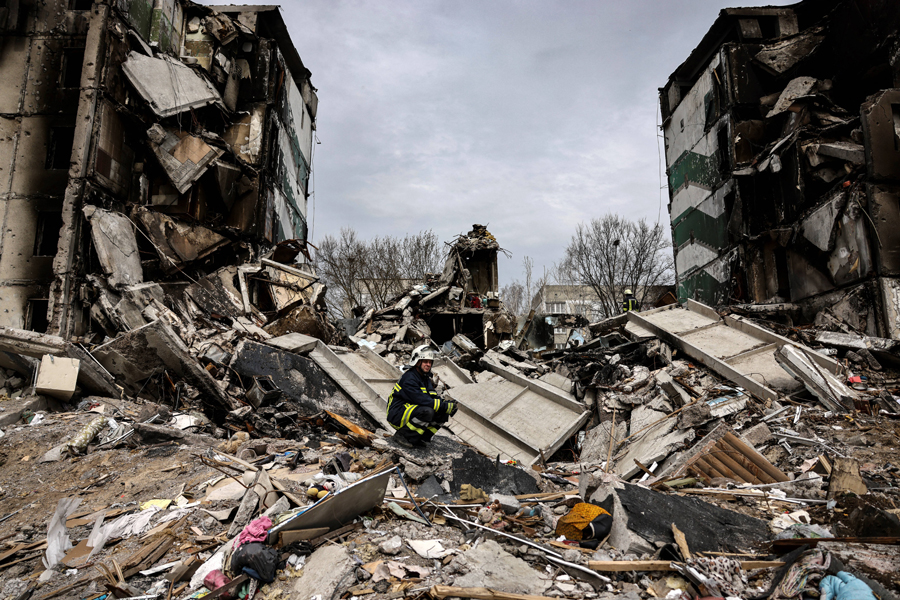 In his latest address, Ukrainian President Volodymyr Zelenskyy seized on an apparent Russian threat to use chemical weapons against the remaining defenders of Mariupol, as they prepare for what he called a “new stage of terror against Ukraine.”

Zelenskyy’s comments came after Eduard Basurin, a spokesperson for the Kremlin-backed, separatist Donetsk People’s Republic, said on Russian television that Russia should bring in “chemical forces” to use in Mariupol, the besieged southern city. He said the remaining Ukrainian forces in Mariupol were dug in at a steel plant and that Russia should encircle it and “smoke out the moles.”

Referring to those remarks, Zelenskyy said in his latest video address, “We take this as seriously as possible.” The video was posted online Monday in the United States and shortly after midnight on Tuesday in Ukraine.

Earlier Monday, a Ukrainian unit in Mariupol claimed on social media that Russian invaders had used chemical weapons there. Lesia Vasylenko, a member of Ukraine’s Parliament, made a similar charge. But those reports could not be independently confirmed.

“We are aware of social media reports which claim Russian forces deployed a potential chemical munition in Mariupol, Ukraine,” said Pentagon spokesperson John Kirby. “We cannot confirm at this time and will continue to monitor the situation closely. These reports, if true, are deeply concerning and reflective of concerns that we have had about Russia’s potential to use a variety of riot-control agents, including tear gas mixed with chemical agents, in Ukraine.”

The British Defense Ministry said Monday that prior use of phosphorous munitions by Russian forces in the Donetsk region in eastern Ukraine “raises the possibility of their future employment in Mariupol as fighting for the city intensifies.”

The Organization for the Prohibition of Chemical Weapons did not immediately respond to a request for comment Monday night.

The Ukrainian Parliament said Monday that it had learned of local reports from police that Russian forces had fired on nitric acid tanks in the Donetsk region.

In his address, Zelenskyy called on Ukrainian allies to help supply “necessary weapons.”

“Unfortunately, we are not getting as much as we need to end this war sooner,” Zelenskyy said in a translation of his address shared by his office. “I am sure that we will get almost everything we need, but not only time is being lost. The lives of Ukrainians are being lost — lives that can no longer be returned.”

Tweets by @forbesindia
'Why not us?': Latinos stuck at Mexico border ask as Ukrainians enter US
Man, woman or X: US rolls out gender-neutral passports