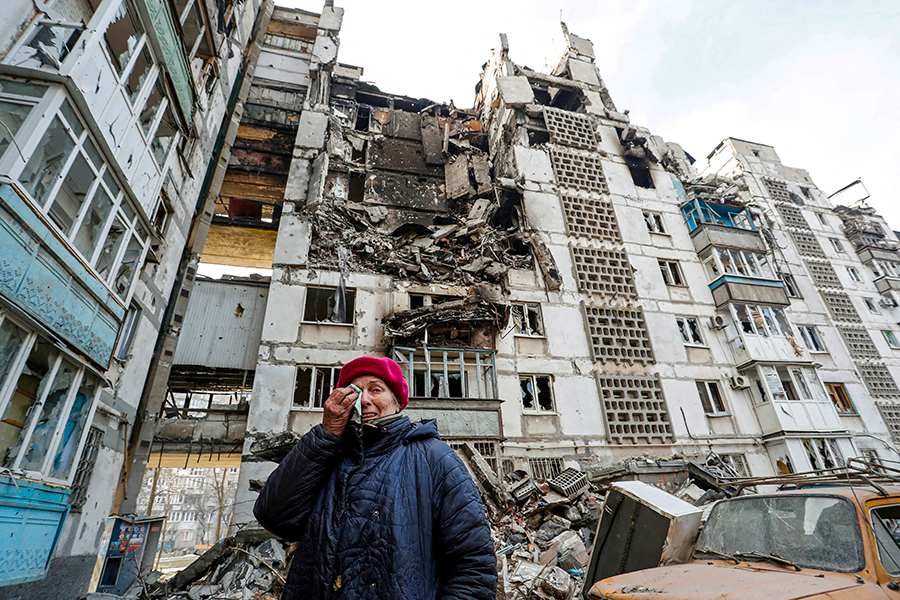 Local resident Valentina Demura, 70, reacts next to the building where her apartment, destroyed during Ukraine-Russia conflict, is located in the besieged southern port city of Mariupol, Ukraine March 27, 2022. Valentina worked for many years at the Azovstal Iron and Steel Works. After her apartment was destroyed, she lives with neighbors in their apartment, and they take shelter together in the basement. Image: Alexander Ermochenko / Reuters

KYIV, Ukraine — Russian forces redoubled attacks on strategic targets across Ukraine Sunday, with fierce fighting reported around the capital, Kyiv, amid signs that the besieged city of Mariupol was close to falling.

As the conflict moved into its second month, Russian forces have largely failed in their first aim to take the largest cities and have narrowed immediate targets to the sieges of the southern port city of Mariupol and the strategically placed city of Chernihiv in the north.

Air raid sirens rang out in Kyiv during the day, but otherwise the city remained calm, lending some credence to the Russian Defense Ministry’s recent assertion that it was turning its focus away from Kyiv to concentrate on the eastern front. Some Russian units were withdrawing to Belarus in the north to regroup and re-equip, according to the Ukrainian military, but heavy Russian artillery attacks continued around Chernihiv, northeast of Kyiv.

Seven people, including two children, died in artillery fire in Kharkiv, in northeast Ukraine, as Russian forces tried to subdue the city near the border, the Ukrainian news media reported. And missiles hit a fuel depot in western Ukraine as Russia continued to use airstrikes to disrupt supply lines to Ukrainian forces.

Ukraine’s top military intelligence officer suggested that Russia was changing its military focus to the south and east and might be trying to divide Ukraine between occupied and nonoccupied territories.

“This is an attempt to create North and South Korea in Ukraine,” said Brig. Gen. Kyrylo Budanov, head of the intelligence division of Ukraine’s Ministry of Defense.

Fighting across the country showed Russian forces were working to consolidate their positions in key spots north of Kyiv and resisting Ukrainian attempts to break their grip there while focusing fully on seizing control of Mariupol. After weeks of siege in the city, Ukrainian soldiers and civilians trapped there were facing increasingly dire conditions, without food and water, forcing people to use untreated sewage water to survive.

Western military analysts and Ukrainian officials have emphasized that Russian forces have suffered heavy losses and have been thwarted in their primary objectives: to wrest control of the country’s main cities.

Still, Ukrainian forces have not been able to reverse Russian gains in any significant way, said Jack Watling, a research fellow and specialist in land warfare at the Royal United Services Institute in Britain.