Authorities have urged Ukrainians in the east to flee — but the road to safety, too, is fraught with peril 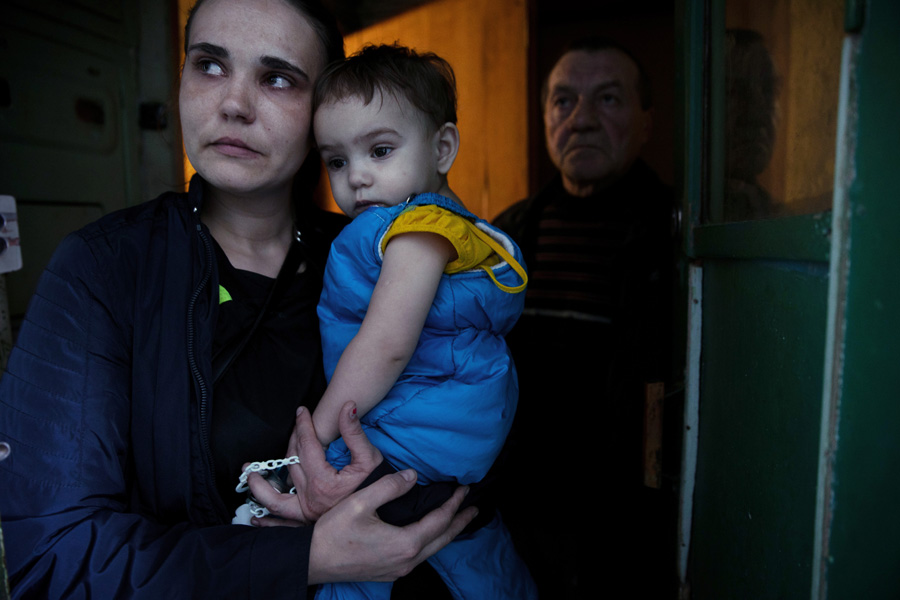 Russian forces attacked civilian areas in eastern Ukraine on Sunday as terrified residents joined an exodus of thousands of Ukrainians fleeing westward, heeding warnings by authorities that Russian troops were massing for a major assault.

On Sunday morning, two residential buildings and a school were hit in the city of Sievierodonetsk, in the Luhansk region of eastern Ukraine, although no casualties were reported. And a barrage of Russian strikes rained down on the airport in Dnipro, a city in east-central Ukraine, wounding five Ukrainian rescue workers, a local official said.

Analysts predict Russian troops, refocusing on the east after being thwarted in the capital, will carry out a major offensive stretching from Dnipro to Izyum, a city almost 150 miles northeast where fighting has already been heavy, U.S. military officials said Sunday. Satellite images showed hundreds of military vehicles moving through the town of Velykyi Burluk toward Izyum on Friday.

Authorities have urged Ukrainians in the east to flee — but the road to safety, too, is fraught with peril.

On a highway near Kyiv, the capital, as many as 50 bodies of civilians who appeared to be trying to escape danger were discovered, a local mayor said Sunday.

“Some were burned,” the mayor of Dmytrivka, Taras Didych, told The New York Times. “Others had their hands tied. Others were shot in the head outside their cars.”

“I now call it the road of death,” Didych said.

More than 7 million Ukrainians have fled their homes since Russia launched its invasion Feb. 24, with more than 4.5 million leaving the country altogether.

Despite persistent Russian attacks on civilians, Dmytro Kuleba, Ukraine’s foreign minister, said Sunday that his country would continue to pursue peace talks with Russia. Kuleba told NBC’s “Meet the Press” that while it was “extremely difficult” to think about sitting down with people who commit “atrocities,” if doing so could help prevent even one massacre, “I have to take that opportunity.”

Ukraine’s president, Volodymyr Zelenskyy, expressed skepticism in remarks excerpted from an interview to be broadcast Sunday night on CBS’ “60 Minutes.”

“I have 100% confidence in our people and in our armed forces,” he said, “but unfortunately I don’t have the confidence that we will be receiving everything we need.”

Tweets by @forbesindia
Paving the way for growth: GeeksforGeeks is making learning accessible and affordable for programmers
These birds aren't lost, they are adapting