These birds aren't lost, they are adapting 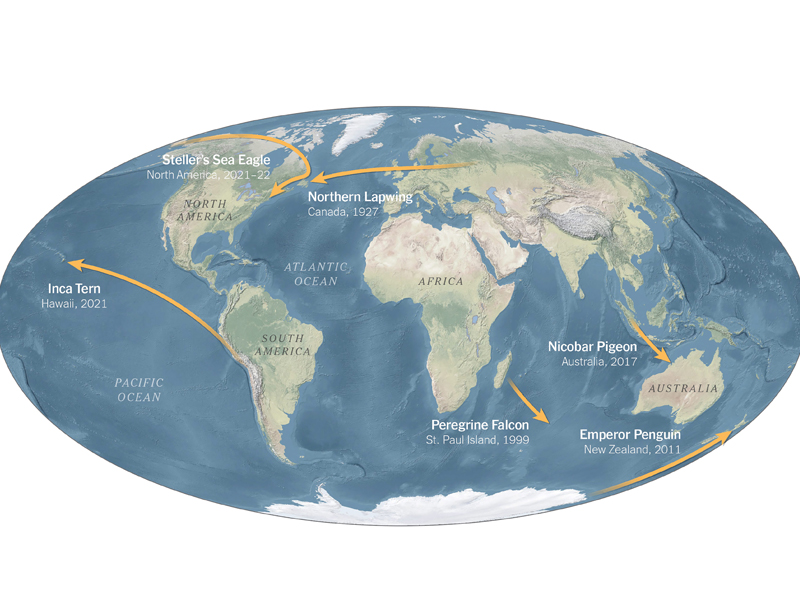 Bird-watchers love to see vagrants, or birds that have traveled far outside their range — but scientists say they have a lot to teach us in a world facing ecological change. (The New York Times)

From what we can tell, the Steller’s sea eagle trekking across North America does not appear homesick.

The bird has strayed thousands of miles from its native range in East Asia over the past two years, roving from the Denali Highway in Alaska down to a potential sighting South Texas before moving eastward and back north to Canada and New England. Its cartoonish yellow beak and distinctive wing coloration recently attracted crowds of rapt birders to Maine before turning up on April Fools’ Day in Nova Scotia.

“We live in a world of very little surprise,” said Nick Lund, outreach manager for Maine Audubon and creator of The Birdist blog. Catching a glimpse of a far-flung bird in one’s backyard, he said, “is like the purest form of joy.”

But the rogue Steller’s sea eagle isn’t just a lost bird: It is an avian vagrant, a term that describes birds that wing their way well beyond their species’s normal range of movement.

Humans have long marveled at such exotic stragglers — which experts also refer to as waifs, rarities, extralimitals, casuals and accidentals — and what they suggest about the biological importance of wandering. “The ‘accidentals’ are the exceptional individuals that go farthest away from the metropolis of the species; they do not belong to the ordinary mob,” Joseph Grinnell, a field biologist in California, noted in 1922. “They constitute sort of sensitive tentacles, by which the species keeps aware of the possibilities of aerial expansion.”

The peripatetic sea eagle wasn’t 2021’s only extralimital. Other fan favorites strayed from the parts of Central and South America where they are typically found: an Inca tern spotted in Hawaii; a small-billed elaenia captured in a net in Quebec; a heronlike limpkin recorded in Texas for the first time; and, a gray-breasted Martin observed in Prospect Park in the New York City borough of Brooklyn.

“Each time there’s a vagrant, it’s its own exciting story,” Lund said. “It has this treasure hunter’s charm.”

A new book, “Vagrancy in Birds,” extends this century-old notion — arguing that vagrancy does not always represent a tale of navigational avian misfortune, but it can be one of the first visible signs of bird species adapting to human-driven alterations to Earth’s waters, lands and skies.

“We’re destroying and creating habitats,” said Alexander Lees, co-author of the book and a senior biodiversity lecturer at Manchester Metropolitan University in England. “We’d expect wildlife to adapt to that.”

Migratory birds are equipped with tools to navigate what Heinrich Gätke, a German ornithologist, described in 1895 as “the whole vault of heaven.”

Some rely on potentially inherited “mental maps” refined during the first journeys of life.

Many employ an internal clock for measuring elapsed time. They may also have an internal compass for determining orientation that they calibrate using the sun, stars, patterns of polarized light and Earth’s magnetic field.

Most will successfully migrate entire lifetimes without a hitch. But the avian navigation system is not error-proof.

For one, unusual weather patterns can rechart a bird’s regularly scheduled flight path. In 1927, for example, a cold spell combined with an “exceptionally high easterly wind” pushed a spray of Lapwings across the Atlantic Ocean to Newfoundland. More recently, extreme droughts have sent marsh-loving glossy ibises from the Mediterranean as far north as the British Isles.

Often, vagrants do not survive their detours. “They either die or disappear never to be seen again,” said Robert Davis, a wildlife biologist at Edith Cowan University in Australia. “It’s almost a novelty, a fleeting moment — then it’s gone.”

Experts have also noticed an uptick for some species in the United States. “We’re seeing a lot more vagrant birds showing up,” said Shannon Curley, a biologist at the College of Staten Island who studies the effects of climate change on bird distribution.

Part of that increase is attributed to more eyes on the sky. “No. 1, there’s just more birders out there than there were before,” Lund said. He added that today’s bird-watchers are better equipped than ever to identify unfamiliar birds and record their appearances with publicly available citizen science tools such as eBird and iNaturalist.

But he and other experts think there’s a more complicated dynamic for the many species — not just birds — known to wander long distances.

“We think of ranges as stable in space and time. But ranges are incredibly dynamic and they can change,” said Lees, of Manchester Metropolitan University.

With growing attention to climate change, scientists emphasized the difficulty of unpacking the role of vagrancy in a species’s adaptation. “You can’t predict when and where a vagrant will show up,” said Lucinda Zawadzki, a zoologist at the University of Oxford. “They are, by nature, rare.”

For her own research, for example, Zawadzki set up 19 mist nets on Bon Portage Island in Nova Scotia to catch and study as many vagrants as possible. She netted 29 in two years — an impressive yield for the subject at hand. But she conceded that it was a small sample size for a scientific study.

In the absence of a solid understanding of their pioneering journeys, humans have typically written off avian vagrants as disoriented or windblown.

“There’s this historical narrative around vagrants that they have to be lost. They have to be aberrant. There’s something wrong with them,” Zawadzki said.

But faced with climate change, she said, the opposite might prove true: The ability to explore — or, seen another way, the opportunity to “get lost” — becomes a huge advantage.

Tweets by @forbesindia
Racing to safety, Ukrainians meet new perils
Will most 'fintech' innovations stand the test of time?