What it's like when your loved ones won't leave Ukraine

Reasons for staying vary. For some it's pride of place, a need not to desert the homeland. For others, it's the paralyzing fear of unknown factors, like getting caught in crossfire while on a bus or train or bridge 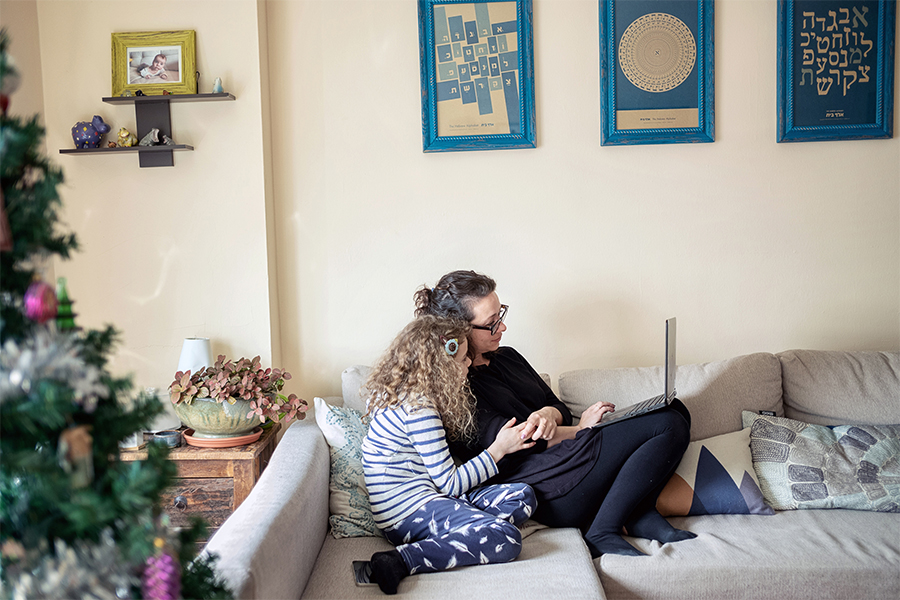 Jane Tuv, with her daughter, Lila, chatting by video with her aunt in Kyiv, Ukraine at their apartment in Queens. Tuv is having so many panic attacks about her aunt, who is refusing to leave, that she has turned to medication. (Misha Friedman/The New York Times)

NEW YORK — Jane Tuv is having so many panic attacks about her aunt, who is refusing to leave Kyiv, the Ukrainian capital, that she has turned to medication. The recent horrifying discovery of civilian bodies in a Kyiv suburb has made her even more afraid.

Tuv, who lives in Rego Park, Queens, has meticulously mapped out instructions with bus and train schedules for her aunt, Tetiana Guzik. She has wired money and looked up places to stay in Poland, Hungary and Romania. But Guzik is staying put.

“I literally told her the exact steps she needs to take,” Tuv, 36, said. “But she’s coming up with all sorts of excuses.”

In a recent WhatsApp interview, Guzik, 53, explained that she had fled before, with all the subsequent feelings of panic, fear and loss, when Russia took over her hometown in Crimea in 2014. It had taken her years to feel like she was home again, and Kyiv was where she intended to stay.

Guzik tries to placate her niece in New York by sending her photos of food items she is able to find amid shortages: cherry-liqueur chocolates one day, a baguette another.

“Look!” she said to Tuv during a WhatsApp chat after one such successful foraging, before describing how, on a recent trip to the supermarket, she heard a loud bang. She ran out to find a rocket had fallen and gotten stuck between two houses. Still, that didn’t deter her: She was staying. 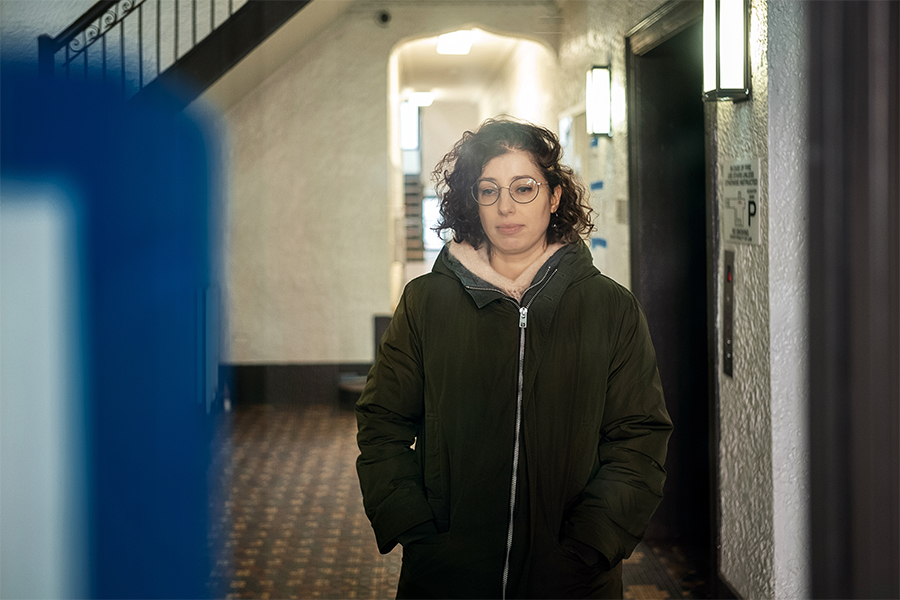 Liza Gutina in the lobby of her apartment building in Brooklyn on March 28, 2022. Her uncle, a mathematician, has chosen to stay in Kherson, a town in southern Ukraine where soldiers mostly keep to themselves, he says. (Misha Friedman/The New York Times)

“Have you lost your mind?” Tuv recalled saying to her aunt.

“Have you lost your mind?” her aunt retorted. “Stop being hysterical and go take your meds.”

Such fraught conversations — between middle-aged and older people refusing to join the exodus of 4 million Ukrainians from their homeland and their panicked, imploring relatives overseas — have been taking place since the war began. And many of those conversations involve residents of the New York City metropolitan area, which has the largest Ukrainian community in the United States.

Reasons for staying vary. For some it’s pride of place, a need not to desert the homeland. For others, it’s the paralyzing fear of unknown factors, like getting caught in crossfire while on a bus or train or bridge. For those who have seen war and displacement before — something many Ukrainians are familiar with — it can be a triggered response to past trauma and violence, psychologists say.

“You’re in an altered state,” said Sophia Richman, a Holocaust survivor who is a faculty member at New York University’s Postdoctoral Program in Psychotherapy and Psychoanalysis. 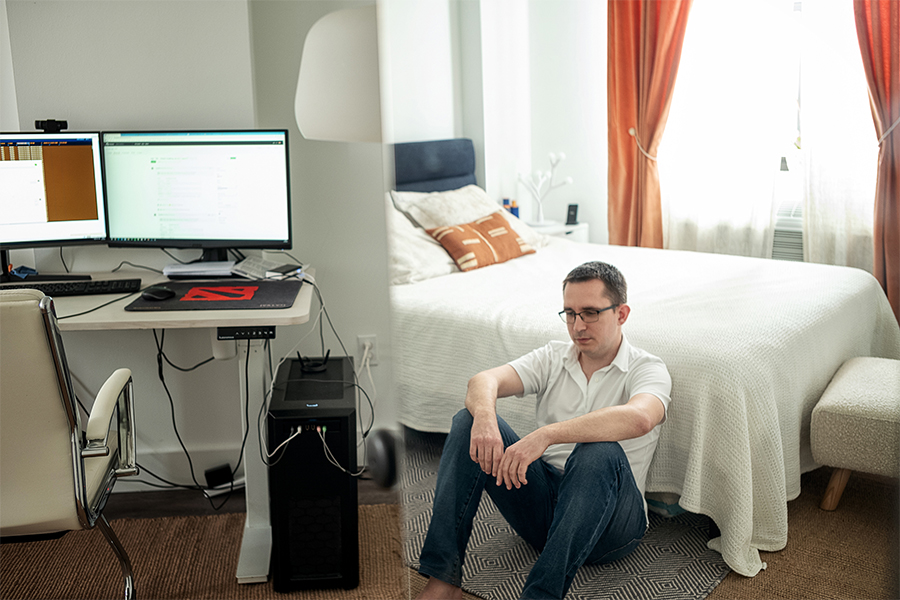 Nazar Lubchenko at his home in Hoboken, N.J., on March 25, 2022. He has the resources to help his parents flee Ukraine, but they prefer to stay put, he says. (Misha Friedman/The New York Times)

This makes sense to Nazar Lubchenko, who has parents and extended family in Kramatorsk, a town bordering Donetsk, one of the breakaway regions that Russia invaded eight years ago. The town was captured for three months. Once Ukraine regained control of the area, his parents renovated their “dacha,” or summer house, planting vegetables and pruning their peach trees.

“There is a saying in Ukraine which roughly translates to there being a cherry tree next to my home, and the bees are humming. It symbolizes your ideal life in Ukraine — you have your house, your property and your garden,” he said. “So they will not leave it.”

When the invasion began in February, Kramatorsk was shelled a number of times. Lubchenko, 32, who lives in Hoboken, New Jersey, urged his parents to take a train to western Ukraine. His appeals fell on deaf ears.

Although he has the resources to help, no amount of money will change his parents’ mind, Lubchenko said. “They think that they know everything about this life and have all their life experience, and they don’t need any advice from me.”

His parents went through the Russian invasion eight years ago, and they are predicting the same will happen this time around, he said. “They still have pasta left over from 2014!” 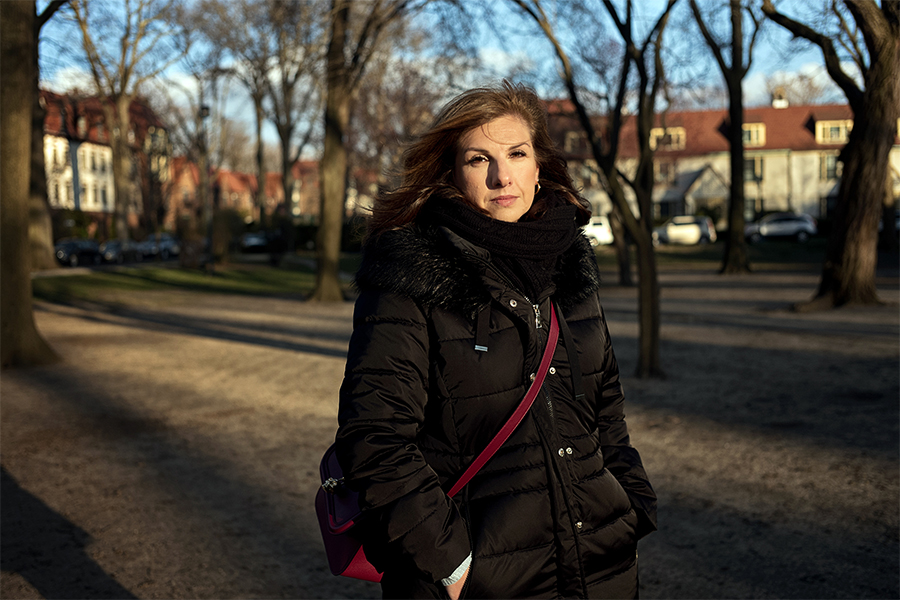 Sasha Krasny near her home in Queens on March 28, 2022. She has been keeping in touch with her 83-year-old aunt, who is living in an apartment in Kharkiv, Ukraine, with blown-out windows. (Misha Friedman/The New York Times)

Liza Gutina, who lives in Boerum Hill, Brooklyn, has a 65-year-old uncle who is refusing to leave Kherson, in southern Ukraine, one of the cities that was taken over by the Russians in the early days of the invasion.

At first her uncle, Alexander, a mathematician who asked not to be fully identified, was staying put for logistical reasons: The routes out of the city were blocked, and some people got killed on their way out. But now conditions in the streets, her uncle said, have gone from frightening to practically absurd. She worries that he sees life there as a new normal — something disturbing, but survivable.

After the Russian soldiers finished looting, her uncle told her, they confined themselves to their armed vehicles in particular parts of the city. Occasionally, he would pass by local protests on his daily walks, during which he would watch the soldiers forcefully remove the most active participants. A few days later, they’d be released and he’d see the protesters again, at another rally.

“I feel like I’m in a sci-fi movie where you live a normal life, but you know the aliens are there, and every so often, they steal people, and then give them back,” he said during a recent WhatsApp conversation.

For some older Ukrainians, familiarity continues to trump uncertainty.

Sasha Krasny, 48, who lives in Forest Hills, Queens, has been trying to persuade her 83-year-old aunt, Ludmila Steblina, to leave her home in Kharkiv, where a bomb went off on her street two weeks ago, blowing out the balcony windows of her apartment.

“I thought that would shake her up,” Krasny said. “But she’s like, ‘No. I know everything here. I know what to expect. If I left, I don’t know where I’m going. I don’t know how I’m going to survive this journey. If I need to go to the bathroom, who will I ask for help?’ ”

After the bomb, Steblina moved her bed away from the windows, but then fell ill from the cold wind that entered through the blown-out windows, she said. Krasny worked with volunteers to get her aunt a heater. But future help is uncertain — some of the volunteers have died amid heavy shelling. When there is shelling, Steblina sits in her bathtub.

“It’s so stressful for me to be on the outside,” Krasny said. “I cannot even comprehend what it feels like to be there, so I have to be cognizant of that. Putting pressure — I don’t think it works.”

Guzik, Tuv’s aunt in Kyiv, has tried to explain to her niece why she is intent on staying in the capital.

“Look, you’re round your four walls. You feel safer than when you’re just out wherever you are,” she said from her living room one recent evening, her windows taped over with thick fabric, so that the light would not attract the attention of nocturnal missile strikes.

She tried to cheer her niece up, describing how she was skirting a ban on alcohol sales, which was just lifted, by stocking up on chocolates filled with cherry liqueur and getting mildly drunk.

She smiled at her niece, her cheeks glowing white from the light of her smartphone.

“Somebody has to keep the roots here,” she said, “because whoever hasn’t left yet has to be responsible for keeping the roots.”

Tweets by @forbesindia
How much microplastic do we breathe, eat, drink?
How FCB Global's leadership is building the agency's growth in post-pandemic world