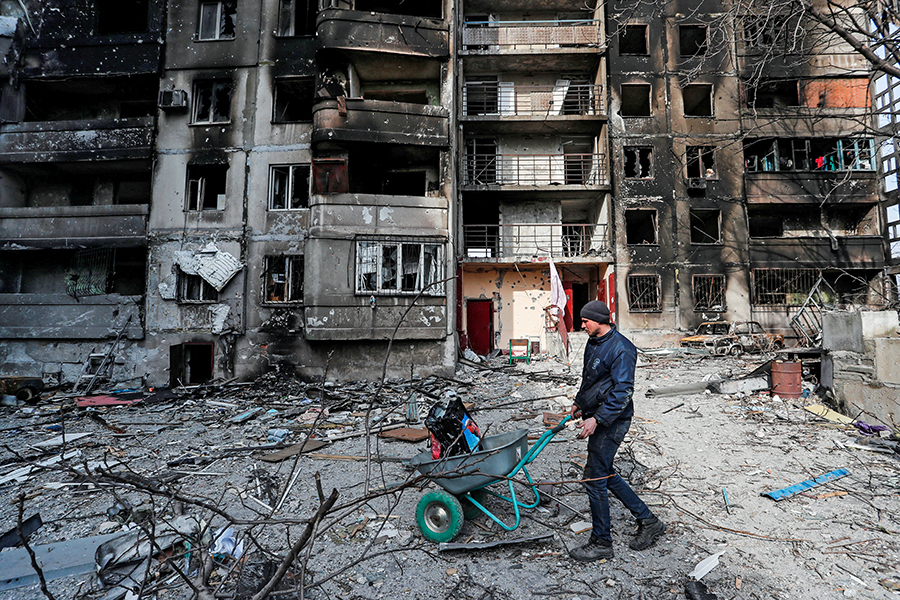 A local resident pushes a wheelbarrow in front of an apartment building destroyed during Ukraine-Russia conflict in the besieged southern port city of Mariupol, Ukraine March 30, 2022. Image: Alexander Ermochenko / Reuters

Ukrainian officials said the country had dispatched a convoy of 45 buses on Thursday to evacuate people trapped in the besieged port of Mariupol after Russia agreed to a cease-fire.

Hours later, a deputy prime minister, Iryna Vereshchuk, said in a videotaped statement on Telegram that the convoy had been stopped by Russian forces in the coastal city of Berdyansk. It wasn’t clear how long the convoy would be detained.

Vereshchuk, the deputy prime minister for the reintegration of the temporarily occupied territories, said about 30 buses were waiting outside Berdyansk in the hope they would be allowed on Friday to go through to Mariupol, which had been under heavy bombardment for weeks. She said that about 600 refugees from Berdyansk boarded buses and would be taken to Zaporizhzhia on Friday morning.

A team from the International Committee for the Red Cross was also preparing to try and enter Mariupol with two trucks of aid, including food, water, medicine and other supplies, officials for the organization in Geneva said.

The Russian Defense Ministry said Thursday it would open an evacuation corridor from Mariupol to Zaporizhzhia on Friday morning at the request of French and German leaders. The ministry said it wanted the United Nations refugee agency and the Red Cross to participate in the evacuation.

Vereshchuk said Thursday morning the Ukrainian side would honor a cease-fire to allow the evacuation to take place and that the government would “do everything possible to ensure the buses arrive in Mariupol.”

“Our military has fully confirmed and guarantees a full cease-fire,” she said. “So, at 9 a.m. we will start the evacuation.”

She said Russian soldiers had confiscated 14 tons of food and medicine that had been taken into another occupied town, Melitopol, on a dozen buses that had been sent in to evacuate people.

Previous attempts to halt the fighting and allow civilians to leave Mariupol have failed when fighting resumed on the main roads out of the city. Some civilians have made it through on their own, traveling through Russian checkpoints and braving land mines and artillery fire, often with white fabric tied to their cars and signs reading “children.”

Vereshchuk said Thursday afternoon that more than 1,400 people had reached Zaporizhzhia in their own cars on Thursday, with roughly 600 of them coming from Mariupol and the rest from other towns held by the Russians.