Russia meanwhile threatened to turn off its gas taps to Europe if payments are not made in rubles, as US President Joe Biden ordered a record release of strategic oil reserves to ease soaring US prices 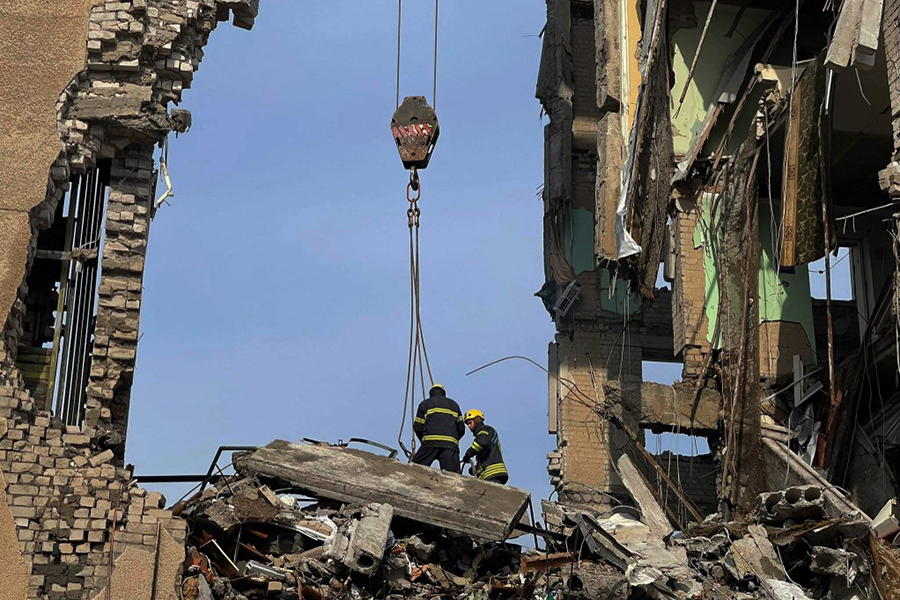 Kyiv, Ukraine: Ukraine's President Volodymyr Zelensky warned Russia is consolidating and preparing "powerful strikes" in the country's east and south, including besieged Mariupol, where a new attempt will be made Friday to evacuate civilians from the devastated city.
Russia meanwhile threatened to turn off its gas taps to Europe if payments are not made in rubles, as US President Joe Biden ordered a record release of strategic oil reserves to ease soaring US prices.
Over a month into Russia's invasion of its neighbour, Vladimir Putin's troops have devastated cities like Mariupol with shelling, killing at least 5,000 people in the port city alone.
In peace talks this week, Russia said it would scale back attacks on the capital Kyiv and the city of Chernigiv, but Ukrainian and Western officials have dismissed the pledge, saying Moscow's troops were merely regrouping.
"This is part of their tactics," said Zelensky in a late-night address.
"We know that they are moving away from the areas where we are beating them to focus on others that are very important... where it can be difficult for us," he said.

In particular, he warned, the situation in the country's south and east was "very difficult".
"In Donbas and Mariupol, in the Kharkiv direction, the Russian army is accumulating the potential for attacks, powerful attacks," he said.
Washington echoed that assessment, with a senior US defence official saying Russia's focus on Donbas could herald a "longer, more prolonged conflict".
Military experts believe that Moscow is ditching efforts to advance simultaneously along multiple axes in the north, east and south, after struggling to overcome stronger-than-expected Ukrainian resistance.
Instead it wants to establish a long-sought land link between Crimea, which Moscow occupied in 2014, and the two Russian-backed Donbas statelets of Donetsk and Lugansk.

Mariupol is the main remaining obstacle to that ambition, and Russian forces have encircled and relentlessly bombarded the city to try to capture it.
Instead, it has been reduced to rubble, with tens of thousands of civilians trapped inside with little food, water or medicine.
Previous attempts to evacuate residents have collapsed, though some have made the dangerous dash to freedom alone, but on Friday Russia says it will allow a humanitarian corridor organised by the International Committee of the Red Cross (ICRC).
The ICRC's Ukraine delegation said on Twitter it was in nearby Zaporizhzhia, where buses from the encircled city are meant to arrive.
"We hope to be able to facilitate safe passage for civilians desperately wanting to flee Mariupol. We are also here with two trucks of assistance, hoping that we can also get assistance in," the organisation's Lucile Marbeau said in a video.
"In these trucks there is food, medicine, relief items, for those civilians who decide to stay," she added.
Ukrainian officials on Thursday sent dozens of buses towards Mariupol, and the local government said on Telegram that civilians would be able to start boarding Friday morning in neighbouring Berdiansk.
Russia has moved about 20 percent of its troops from around Kyiv but its strikes have continued and troops are likely "going to be repositioned, probably into Belarus, to be refitted and resupplied and used elsewhere in Ukraine," said Pentagon spokesman John Kirby.
Russian troops have also pulled back from the Chernobyl nuclear plant after weeks of occupation, but have taken a number of captive Ukrainian servicemen with them, according to officials in Kyiv.
Western intelligence has warned that Putin's advisors may be "afraid to tell him the truth" about battlefield losses or the damage that sanctions have wrought on the country's economy.
And Biden suggested Putin may have placed some advisors under house arrest, though he cautioned "there's a lot of speculation."

'I hope all this will end soon'

The Kremlin has rejected the claims, with spokesman Dmitry Peskov saying Western officials "don't understand President Putin, they don't understand the mechanism for taking decisions and they don't understand the style of our work".
With his economy crippled by unprecedented international sanctions, Putin has sought to leverage Russia's status as an energy power, and warned Thursday that EU members will need to set up ruble accounts from Friday to pay for Russian gas.
"If such payments are not made, we will consider this a breach of obligations on the part of our buyers" and existing contracts would be stopped, Putin said.
The EU has joined the United States in imposing sanctions, and European Parliament President Roberta Metsola is expected in Kyiv soon in a show of support.
But the bloc has not imposed an energy embargo, and Germany, which imported 55 percent of its gas supplies from Russia before the war, insisted it will pay in euros or dollars as stipulated in contracts.
Berlin and Paris were also "preparing" for Russian gas to simply stop flowing, France's economy minister said.
Biden meanwhile moved to mitigate rising domestic fuel prices by announcing a release from strategic US reserves of a million barrels daily for six months.
The record release amounts to augmenting global supplies by about one percent.
Peace talks between Ukrainian and Russian officials were expected to resume via video on Friday, with Kyiv negotiator David Arakhamia saying Turkey and Germany had offered to serve as security guarantors in any eventual agreement.
On the ground around Kyiv, Ukrainian forces have continued to push back Russian troops, capturing territory on the outskirts of the capital as Moscow's advance stalls.
Zelensky praised the advances, but said he was stripping two generals of their ranks for unspecified offences.
"Right now I don't have time to deal with all the traitors, but gradually all of them will be punished," he said.
Civilians have been trickling out of devastated areas, including three-year-old Karolina Tkachenko, who was helped over a pipeline east of Kyiv by Ukrainian troops as she and her family escaped.
"The shops are closed, there's no delivery of supplies. The bridge is also blown up, we can't go for the groceries through there," said her mother Karina, holding her daughter in a pink bobble hat in her arms.
"I hope all this will end soon, and I will go back to my work."
By Danny KEMP
© Agence France-Presse

Tweets by @forbesindia
When two leaders collide, the result can be less fraud
Sri Lanka steps up security as anger over crisis boils over