Since the war started, Netrebko's performances at the Metropolitan Opera—where she has sung for 20 years—have been canceled indefinitely. Other leading opera houses, including in Munich and in Zurich, also scrapped upcoming performances thanks to her past support of the Russian President 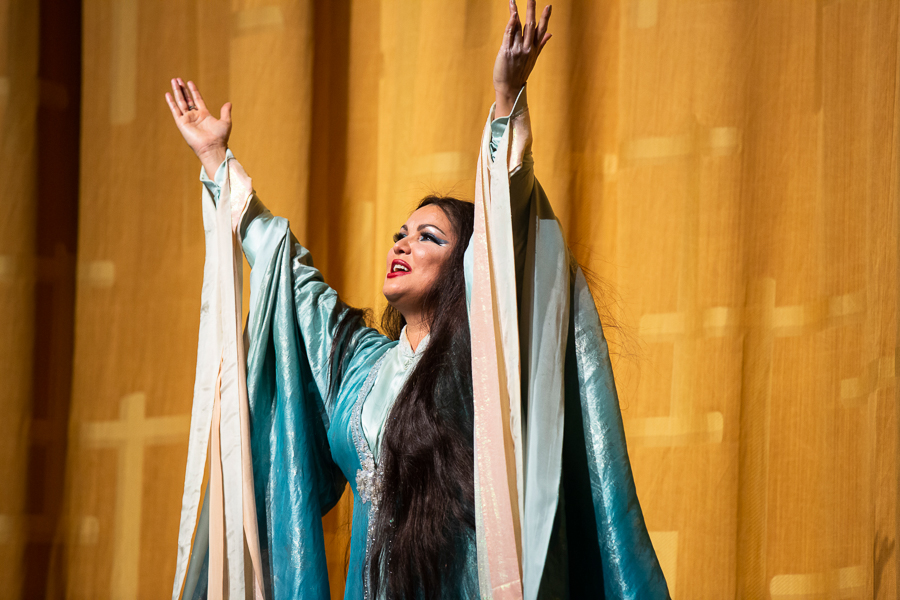 Anna Netrebko takes a bow after performing at the Metropolitan Opera in New York, Dec. 31, 2019. The superstar soprano, whose past support of the Russian president Vladimir Putin cost her many engagements after the invasion of Ukraine, said in a statement that she was not “allied with any leader of Russia.”
Image: Caitlin Ochs/The New York Times

Anna Netrebko, a Russian diva whose international career recently fell apart because of her past support of President Vladimir Putin of Russia, sought to distance herself from him Wednesday, saying they had only met a few times.
Since the war started, Netrebko’s performances at the Metropolitan Opera — where she has sung for 20 years, becoming its reigning prima donna — have been canceled indefinitely.
Other leading opera houses, including in Munich and in Zurich, also scrapped upcoming performances. On Wednesday, in what seemed an attempt at orchestrating a comeback, Netrebko issued a statement distancing herself from Putin in the wake of the Russian invasion of Ukraine.
“I am not a member of any political party nor am I allied with any leader of Russia,” Netrebko said in the statement, which was posted on social media.
Netrebko wrote that “I expressly condemn the war on Ukraine and my thoughts are with the victims of this war and their families,” but she did not explicitly criticize Putin and did not directly address her previous record of support for him.
“I acknowledge and regret that past actions or statements of mine could have been misinterpreted,” said Netrebko, who once endorsed Putin’s reelection and has over the years offered support for his leadership. In 2014, she was photographed holding a flag used by Russia-backed separatists in Ukraine.
“In fact, I have met President Putin only a handful of times in my entire life, most notably on the occasion of receiving awards in recognition of my art or at the Olympics opening ceremony,” she wrote. “I have otherwise never received any financial support from the Russian Government, and live and am a tax resident in Austria.”
The collapse of the career of Netrebko, one of the biggest stars in opera, has been one of the performing arts’ most visible consequences of Putin’s decision to invade Ukraine late last month.
Netrebko is one of a handful of Russian artists with ties to Putin who have seen their international engagements dry up since the invasion. Valery Gergiev, a Russian conductor and a longtime friend and close supporter of Putin, was fired as chief conductor of the Munich Philharmonic this month and has been barred at many concert halls and festivals outside Russia.
In her statement, Netrebko said that she planned to resume performing in late May in Europe. In an Instagram post this week showing pictures of herself in the desert, she wrote, “Soon I will be back to work. Not really missing it, to be honest.”

The Metropolitan Opera, which has put in place a policy of not engaging performers or institutions that voice support for Putin, even as it continues to perform Russian repertory and present Russian artists, said Netrebko’s new statement was not enough.
“We’re not prepared to change our position,” Peter Gelb, the Met’s general manager, said in a statement. “If Anna demonstrates that she has truly and completely disassociated herself from Putin over the long term, I would be willing to have a conversation.”
Representatives from the Bavarian State Opera in Munich and the Zurich Opera did not immediately respond to requests for comment. Alexander Neef, director of the Paris Opera, where Netrebko is scheduled to appear later this year in a production of Verdi’s “La Forza del Destino,” said in a statement that the opera was evaluating the situation.
At a news conference Wednesday, before Netrebko issued her statement, Neef said that the opera house would not feature artists who have shown “clear support for the actions of the current regime in Russia.”
At the outset of the invasion, Netrebko posted statements critical of the war, but she also said she did not believe it was right to force artists to voice political opinions and “denounce their homeland.” At one point, she shared a text that used an expletive in reference to her Western critics, and said they were “as evil as blind aggressors.” She remained silent about Putin.
In her statement Wednesday, Netrebko reiterated her opposition to the war. She added, “I love my homeland of Russia and only seek peace and unity through my art.”
On Friday, Putin lashed out at Western leaders for what he described as a campaign to cancel Russian culture and history, saying that composers like Tchaikovsky and Rachmaninoff were being removed from programs, even though the vast majority of orchestras and opera houses in the West have continued to prominently feature Russian works and artists. That night, the Met opened a revival of Tchaikovsky’s “Eugene Onegin,” featuring Russian, Ukrainian, American, French Armenian, Polish and Estonian artists.

Tweets by @forbesindia
Interview with ZebPay's CEO, Avinash Shekhar
Deltacron is here. Here's what you should know