All calm on the bond front 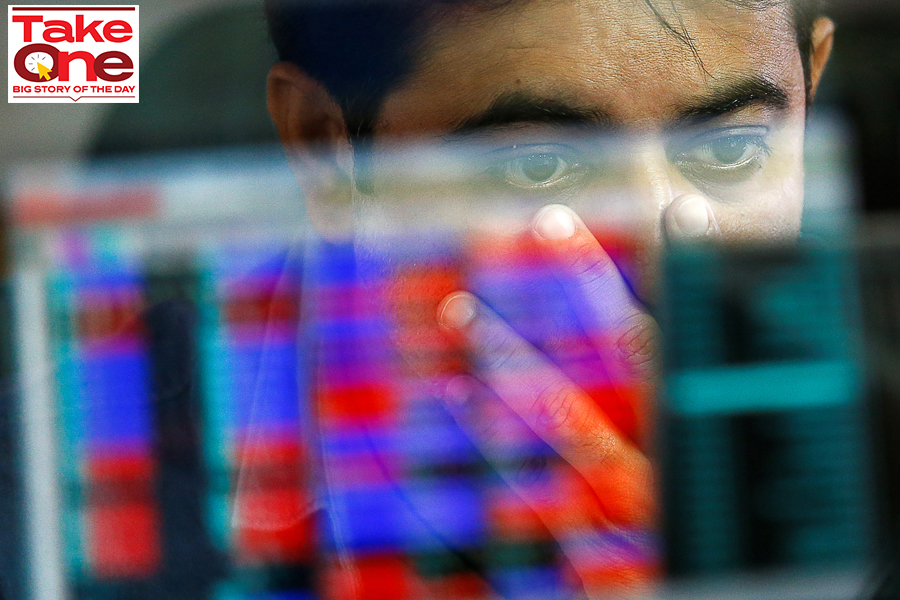 If an investor in Indian bonds went on a month-long vacation in late February they’d have missed nothing. War, rising commodity and oil prices, and surging bond yields globally have done nothing to the price of a 10-year Indian government bond.

At 6.7 to 6.9 percent, Indian bond yields have stayed stable. One reason for this is that bond auctions for the new fiscal are expected to kick off in April. In the absence of fresh supply in March, putting a price on the current stock of bonds has been difficult. “Markets are subdued at this point in time [and you] don’t have too many nervous players sitting with bonds,” says Anant Narayan, associate professor at SP Jain Institute of Management and Research.

While Indian bonds have barely moved, global bonds have seen a ferocious sell-off. The yield on the benchmark US 10-year bond has risen 80 bps from 1.7 percent to 2.5 percent. The German bund, which spent most of the last decade yielding negative returns has turned positive. It would pay 0.5 percent a year if an investor held it for 10 years. Similarly, yields in Japan and other Eurozone countries have risen as well.

The key reason behind this has been the resurgence of inflation, which has been largely absent since the mid-1980s. As the Covid lockdowns hit supply chains, shortages of goods and commodities came head to head with consumers who were able and willing to spend cash handouts they got to tide over the crisis.

US inflation has been consistently running at over 2 percent that the Fed is comfortable with. Recent readings have averaged 7 percent. This has resulted in policymakers ending quantitative easing and hiking interest rates. Markets have already priced in at least seven 25 bps rate hikes in 2022.

What, then, do rising global yields mean for Indian bonds? Are they too likely to see a sell-off or have they already priced in the worst?

Aiding Indian yields has been Reserve Bank of India (RBI), which has continuously batted for growth over inflation in the last two years. The key question now is, does the central bank focus on inflation or growth? “As long as inflation doesn’t seem to be running away too much away from the 6 percent target you can focus on growth,” says R Sivakumar, head of fixed income at Axis Mutual Fund. “It is only in hindsight that we will know if it is the correct policy.” 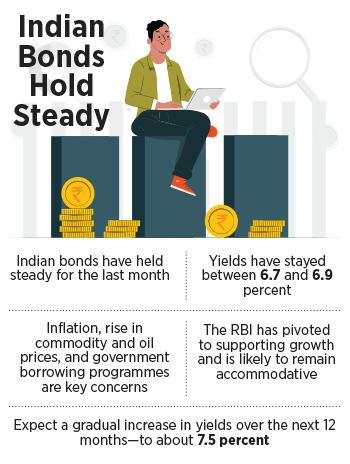 The RBI’s choices seem to be limited as the war in Ukraine is likely to keep oil and commodity prices elevated. A host of imports from coking coal to nickel and potash (for fertilisers) to natural gas have seen prices spike. Global food prices are at their highest in the last decade, according to the World Food Price Index put out by the Food and Agriculture Organization. Elevated commodity and food inflation is a supply-side shock that the RBI would have limited success in controlling with higher interest rates.

At the same time, the last three fiscal years have seen dismal economic growth performance. In the three years leading to FY22, GDP growth is expected to be 1 percent. At the same time inflation has been at 5 percent. With incomes suppressed on account of a dislocation in the labour markets and bank credit growth averaging 6 percent, there is nothing the RBI can do to control demand. As a result, according to Sivakumar, the Indian central bank has been tolerant of higher inflation while trying to get growth back on track.

In the new fiscal, Indian bond prices are likely to move on account of three factors. First, the government borrowing programme. At Rs18,00,000 crore it promises to keep yields elevated. Since the Budget, bond yields have moved from 6 percent to 6.8 percent. Second, global oil and commodity prices that could remain elevated. However, there is also a counter argument that war is ultimately destructive and does lead to suppressed demand for commodities in the long run. So it’s wait and watch mode on that front.

Third, the average inflation rate in India. The RBI has shown a tolerance for 5 percent inflation and going forward this will be a keenly watched measure. While markets expected a rate hike, and in December and February the RBI surprised by not hiking rates. “Governor [Shaktikant] Das has pivoted to growth [and] so he will use bond prices as well as monetary policy to control yields,” says Narayan of SP Jain. What is unknown is where inflation next year will settle and the extent to which the government borrowing programme will be exceeded.

There’s also the added comfort of adequate foreign reserves. At $619 billion, they provide enough buffer to keep the currency in check, making investors more comfortable about the long-term value of their Indian bond holdings. A run on the currency could change that calculus very quickly.

For now, there are few signs of a sell-off in Indian bonds of the type we saw in February or globally. Bond forward rate agreements over the next 12 months are at about 7.25 percent, implying a fall but not anything close to what we have seen globally. Inflation and commodity prices point to gradual fall in bond prices over the course of the next 12 months.