Ukraine, the world's top producer of sunflower oil and a major exporter of wheat is a breadbasket of the world under threat from the Russian invasion 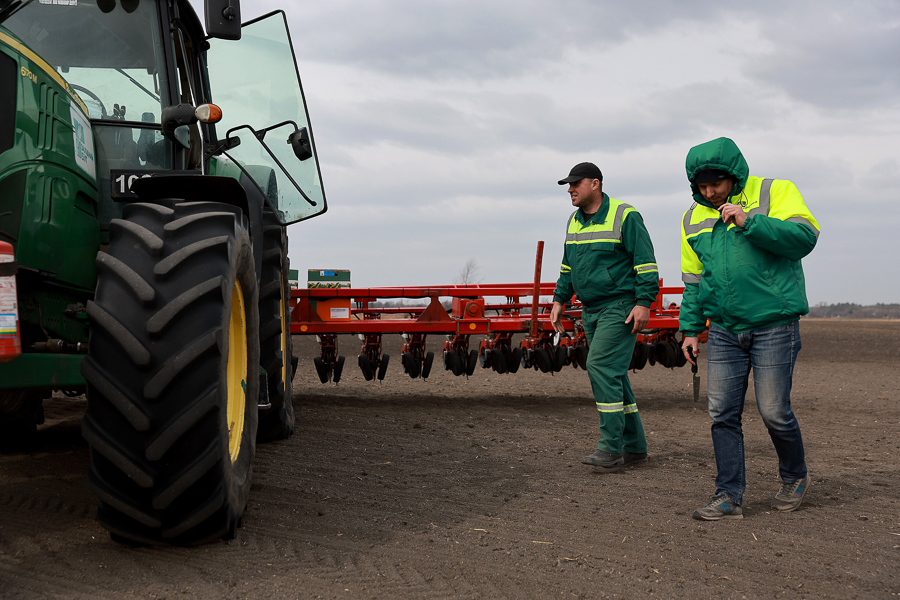 Morda Vasyl (L) and Holovanych Andrii work on planting sugar beet seeds in the field on March 26, 2022 in Humnyska, Ukraine. With more than 150,000 square miles of agricultural land, Ukraine has been called the "breadbasket" of Europe, and is a major exporter of wheat, barley, sugar beets and other grains and sunflower oil. (Credit: Joe Raedle/Getty Images)

Bahaté, Ukraine: In an endless field in southwest Ukraine, farmers began to plant sunflower seeds at the start of the sowing season, but a fuel shortage threatens production in the war-torn country, whose land feeds millions around the world.
The world's top producer of sunflower oil and a major exporter of wheat is a breadbasket of the world under threat from the Russian invasion.
This means the fate of global food security depends on Ukrainian farms, such as the fertile grounds of Alexander Petkov's land in Bahate, near the Romanian border.
"The season starts here, in the areas not hit by war," Petkov, 47, said. The regions torn by the conflict such as the southern cities of Kherson and Mykolaiv further to the east will not be able to begin planting as usual.
Mykolaiv is facing a daily barrage of Russian shelling while Ukrainian forces have launched a counter-offensive to retake Kherson.
Last year, Petkov's farming business, spread across five villages, yielded 30,000 tonnes of barley, 27,000 tonnes of wheat and 5,500 tonnes of sunflower.

Petkov points to the blackened sunflower seeds and wheat piling up in his barns as there is nowhere to take them. There is concern too over the risk that fuel needed for the sowing season will quickly run out.
"All the ports are closed because of the presence of Russian warships in the Black Sea," the farmer said.
The Ukrainian government has suggested exporting agricultural products via the Romanian port of Constanta, but there has been no progress in the plan, Petkov said.
"We're currently using the remaining fuel we had before the war, but there is no new supply," he said, adding that he could run out within five days.

In a report last week, the United Nations Food and Agriculture Organization warned that Ukraine depends heavily on fuel imports, with about 70 percent of imports of petrol and diesel coming from Russia and its ally Belarus.
"A key bottleneck to the spring planting season, where it is possible due to the war, is fuel availability," the FAO said.
Only one fifth of almost 1,300 large agribusinesses surveyed by the Ukrainian government in the week of March 14 had enough fuel to plant this spring, said the FAO.
The country could also face shortages of pesticides and fertilisers, the UN agency warned.
The agriculture ministry announced Friday that more than 150,000 hectares (370,000 acres) of spring crops had been planted, including corn, soybeans, sunflowers, millet, buckwheat, oats and beets.
While Ukraine has enough reserves to cover its food security for one year, the Russian invasion "risks creating a 30-percent reduction in cultivated areas" affecting 100 million people around the world, according to the ministry.
"Russian troops mine fields in Ukraine, blow up agricultural machinery, destroy fuel reserves needed for sowing," President Volodymyr Zelensky said in a video speech to a forum in Doha.
"Our country has enough food. But the lack of exports from Ukraine will hit a number of populations in the Islamic world, in Latin America and in other parts of the planet," he warned.

Before the war, Ukraine was the world's fourth largest exporter of corn and was set to become the third biggest exporter of wheat after Russia and the United States.
Russia and Ukraine alone account for 30 percent of global wheat exports.
US President Joe Biden has warned that food shortages are "going to be real" due to the war.
On Friday, the European Union launched a programme dubbed the Food and Agriculture Resilience Mission (FARM) aimed at easing shortages.
Petkov's farm was no stranger to threats before the war.
His employees carried semi-automatic rifles to deter criminals.
"We already had fields and harvester machines set on fire," he said, citing extortion attempts by "criminal or mafia elements".
"We had to install a roadblock at the entrance of the village, which is guarded by five or six members of the company as well as armed villagers every night," Petkov said.
One of his associates, Vyatcheslav, who refused to give his last name, said the farmers were ready to face the Russians.
"For the moment, thank God, the Russian invaders have not arrived here," said Vyatcheslav, 45.
"We will use these weapons against them if necessary," he said. "But at the moment they only serve to protect families and the land, and not let anyone in."
By Selim SAHEB ETTABA
© Agence France-Presse

Tweets by @forbesindia
Cairo to Kyiv: Social media's rocky ride through conflict zones
All calm on the bond front