Ukraine war threatens to cause a global food crisis 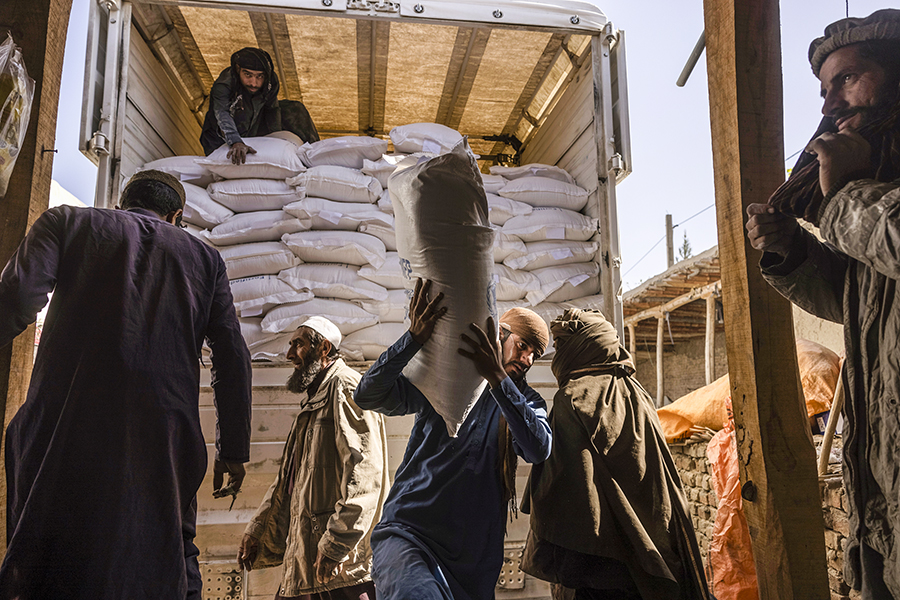 Laborers unload sacks of flour from a World Food Program convoy that traveled from Kabul to Afghanistan’s Tagab district, Oct. 27, 2021. Aid workers warn that a humanitarian crisis has already been exacerbated by the war in Ukraine, making it more difficult to feed the roughly 23 million Afghans — more than half the population — who do not have enough to eat. (Victor J. Blue/The New York Times)

The war in Ukraine has delivered a shock to global energy markets. Now the planet is facing a deeper crisis: a shortage of food.

The upheaval is compounded by major challenges that were already increasing prices and squeezing supplies, including the pandemic, shipping constraints, high energy costs and recent droughts, floods and fires.

Now economists, aid organizations and government officials are warning of the repercussions: an increase in world hunger.

The looming disaster is laying bare the consequences of a major war in the modern era of globalization. Prices for food, fertilizer, oil, gas and even metals like aluminum, nickel and palladium are all rising fast — and experts expect worse as the effects cascade.

“Ukraine has only compounded a catastrophe on top of a catastrophe,” said David M. Beasley, executive director of the World Food Program, the U.N. agency that feeds 125 million people a day. “There is no precedent even close to this since World War II.”

Ukrainian farms are about to miss critical planting and harvesting seasons. European fertilizer plants are significantly cutting production because of high energy prices. Farmers from Brazil to Texas are cutting back on fertilizer, threatening the size of the next harvests.

China, facing its worst wheat crop in decades after severe flooding, is planning to buy much more of the world’s dwindling supply. And India, which ordinarily exports a small amount of wheat, has already seen foreign demand more than triple compared with last year.

Around the world, the result will be even-higher grocery bills. In February, U.S. grocery prices were already up 8.6% over a year prior, the largest increase in 40 years, according to government data. Economists expect the war to further inflate those prices.

For those living on the brink of food insecurity, the latest surge in prices could push many over the edge. After remaining mostly flat for five years, hunger rose by about 18% during the pandemic to between 720 million and 811 million people. Earlier this month, the United Nations said that the war’s impact on the global food market alone could cause an additional 7.6 million to 13.1 million people to go hungry.

The World Food Program’s costs have already increased by $71 million a month, enough to cut daily rations for 3.8 million people.

“We’ll be taking food from the hungry to give to the starving,” Beasley said.

Rising prices and hunger also present a potential new dimension to the world’s view of the war. Could they further fuel anger at Russia and calls for intervention? Or would frustration be targeted at the Western sanctions that are helping to trap food and fertilizer?

While virtually every country will face higher prices, some places could struggle to find enough food at all.

Armenia, Mongolia, Kazakhstan and Eritrea have imported virtually all of their wheat from Russia and Ukraine and must find new sources. But they are competing against much larger buyers, including Turkey, Egypt, Bangladesh and Iran, which have obtained more than 60% of their wheat from the two warring countries.

Rising food prices have long been a catalyst for social and political upheavals in poor African and Arab countries, and many subsidize staples like bread in efforts to avoid such problems. But their economies and budgets — already strained by the pandemic and high energy costs — are now at risk of buckling under the cost of food, economists said.

Tunisia struggled to pay for some food imports before the war and now is trying to prevent an economic collapse. Inflation has already set off protests in Morocco and is helping stir renewed unrest and violent crackdowns in Sudan.

“A lot of people think that this is just going to mean that their bagels are going to become more expensive. And that’s absolutely true, but that’s not what this is about,” said Ben Isaacson, a longtime agriculture analyst with Scotiabank.

Since the 1970s, North Africa and the Middle East have grappled with repeated uprisings.

“What actually led to people going into the streets and protesting?” he said. “It starts from food shortages and from food price inflation.”

In Afghanistan, aid workers warn that the humanitarian crisis has already been exacerbated by the war in Ukraine, making it more difficult to feed the roughly 23 million Afghans — more than half the population — who do not have enough to eat.

For the global food market, there are few worse countries to be in conflict than Russia and Ukraine. Over the past five years, they have together accounted for nearly 30% of the exports of the world’s wheat; 17% of corn; 32% of barley, a crucial source of animal feed; and 75% of sunflower seed oil, an important cooking oil in some parts of the world.

Russia has largely been unable to export food because of sanctions that have effectively cut it off financially. Ukraine, meanwhile, has been cut off physically. Russia has blocked the Black Sea for exports, and Ukraine lacks enough rail cars to transport food over land.

What is now becoming more worrisome is the next harvest, particularly in Ukraine. On March 11, Ukraine’s agriculture minister begged allies for 1,900 rail cars of fuel, saying that the country’s farms had run out after supplies were diverted to the military. Without that fuel, he said, Ukrainian farmers would be unable to plant or harvest.

There are other hurdles. The United Nations estimated that up to 30% of Ukrainian farmland could become a war zone. And with millions of Ukrainians fleeing the country or joining the front lines, far fewer can work the fields.

Russian and Ukrainian wheat is not easily replaced. Inventories are already tight in the United States and Canada, according to the United Nations, while Argentina is limiting exports, and Australia is already at full shipping capacity. Over the past year, wheat prices are up 69%. Among other major food exports of Russia and Ukraine, corn prices are up 36% and barley 82%.

The war also threatens another longer-term shock to the food markets: a shortage of fertilizer.

Matt Huie, a farmer near Corpus Christi, Texas, said that skyrocketing prices had already forced him to stop applying fertilizer to the grazing fields that nourish his hundreds of cows, assuring that they will be skinnier come slaughter. Now he is worried he will have to also reduce fertilizer for his next corn crop, which would slash its yield.

Russia is the world’s largest fertilizer exporter, providing about 15% of the world supply. This month, just as farmers around the world prepared for planting, Russia told its fertilizer producers to halt exports. Sanctions already were making such transactions difficult.

Sanctions also have hit Russia’s closest ally, Belarus, a leading producer of potash-based fertilizer, critical for many major crops, including soybeans and corn. But even before the Ukraine war, Belarus’ fertilizer exports were blocked because of sanctions over its seizure of an expatriate dissident who had been a passenger in a Ryanair jetliner forced to land in the country.

In another ominous signal to fertilizer customers, earlier this month European fertilizer producers said they were slowing or halting production because of soaring energy prices. Many fertilizers are made with natural gas.

The world’s major fertilizers have now more than doubled or tripled in price over the past year.

Brazil, the world’s largest producer of soybeans, purchases nearly half its potash fertilizer from Russia and Belarus. It now has just three months of stockpiles left. The national soybean farmers association has instructed members to use less fertilizer, if any, this season. Brazil’s soybean crop, already diminished by a severe drought, is now likely to be even smaller.

“They’re preventing fertilizers from getting to producing countries,” said Antonio Galvan, the soybean association’s president, criticizing international sanctions. “How many millions are going starve to death because of the lack of these fertilizers?”