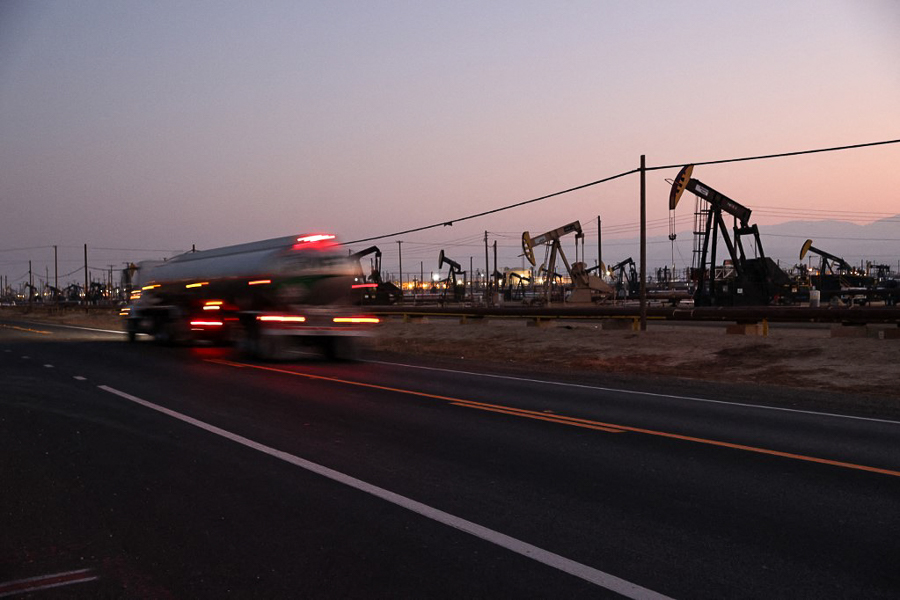 A truck passes pumpjacks in the Belridge oil field on November 03, 2021 near McKittrick, California. The Biden administration pledged to cut methane emissions from oil and gas production yesterday. In California, 35,000 oil and gas wells sit idle, many of which are unplugged and could leak methane gas. Scientists estimate that one-third of human-induced global warming is caused by methane. (Credits: Mario Tama/Getty Images via AFP)

The energy sector's overall emissions of methane are massively underreported, the IEA said Tuesday as it promoted cuts to the most potent greenhouse gas as a quick way to make a major impact on global warming.
The International Energy Agency said its latest annual Global Methane Tracker had found that emissions by the energy sector were about 70 percent higher than official government figures.
It said this showed the need for greater transparency as well as "stronger policy action to drive down emissions of this potent greenhouse gas," responsible for some 30 percent of the rise in global temperatures since the Industrial Revolution.

While methane dissipates faster than carbon dioxide, it has a much more powerful warming effect in the atmosphere.
Humans are responsible for about 60 percent of methane emissions, and cutting these could have a quick and major impact.
"Cutting global methane emissions from human activities by 30 percent by the end of this decade would have the same effect on global warming by 2050 as shifting the entire transport sector to net zero CO2 emissions," IEA chief Fatih Birol said.
The tracker, which for the first time includes country-by-country emissions from coal mines and bioenergy, showed methane emissions from the energy sector grew by just under five percent last year.
The IEA logged "significant emissions" in Texas and parts of Central Asia, with Turkmenistan alone responsible for one-third of "large emissions events" logged by satellites last year.

The energy industry is a major source of methane emissions from leaks and operations. Many older oil wells flare off unwanted methane — which is essentially natural gas used to heat homes — as building infrastructure may have originally cost too much.
But with gas prices soaring, the costs of investments to capture methane and reduce leaks will quickly pay for itself, and would help reduce tight supplies.
"Had all methane leaks from fossil fuel operations in 2021 been captured and sold, natural gas markets would have been supplied with an additional 180 billion cubic metres of natural gas... equivalent to all the gas used in Europe's power sector and more than enough to ease today's market tightness," the report found.
At last year's COP26 Climate Change Conference in Glasgow, participants signed a Global Methane Pledge to reduce methane emissions by 30 percent by 2030.
But of the five countries with the largest methane emissions from their energy sectors — China, Russia, the United States, Iran and India, the IEA noted only the United States is currently a signatory.
© Agence France-Presse

Tweets by @forbesindia
Putin insulated Russia's economy. Biden's sanctions not nearly enough to stop him on Ukraine
If we are wearing India jersey, we have to do something great for India: Vandana Katariya—Forbes India 30 Under 30 2022