Russian businessmen in China are being contacted by companies from Belarus and Russia to open trade lines as Western sanctions choke supply chain, finances 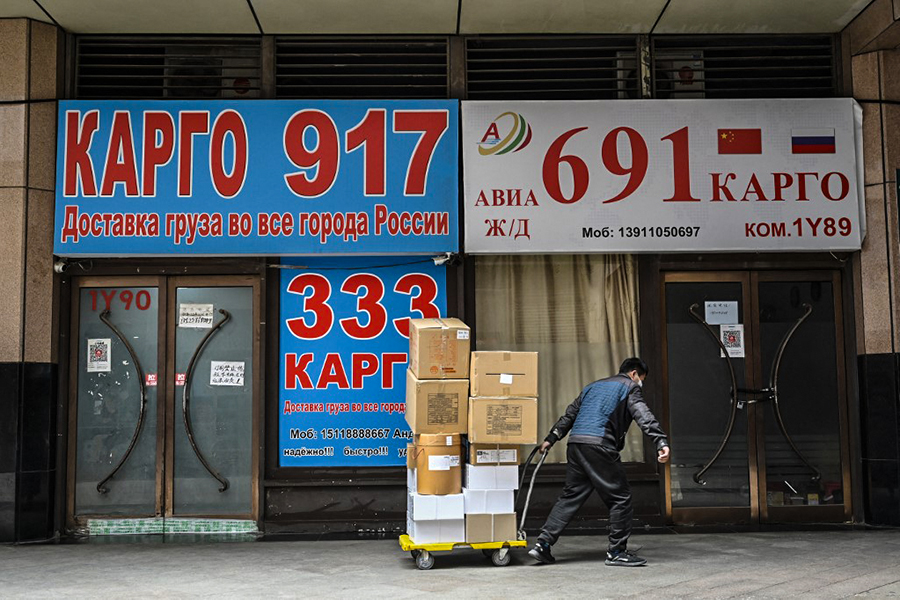 Beijing, China: For Marat, a Russian businessman based in Shanghai, sanctions on his home country have heralded an unexpected opportunity in China as companies struggle to keep their supply chains open.
The 42-year-old has already been contacted by a components company hunting for partners in China after being cut off from its suppliers in Europe and North America.
"'Just be ready'", he said was the message from the firm based in Belarus, a Russian ally also under sanctions for supporting its invasion of Ukraine.
"It will be a bigger workload for me, and for sure, as a result, bigger rewards," said Marat, who gave one name only due to the sensitivity of commenting on the war inside China.

Since Russian President Vladimir Putin launched the bloody assault on Ukraine, Western capitals have frozen Moscow out of the global financial system, tipping its currency into freefall and pushing the country to the verge of default.
But China — a longtime Russian ally — has refused to follow suit, throwing Moscow a potential economic lifeline to match the diplomatic cover it has provided by refusing to condemn the invasion.
Beijing is already Moscow's largest trading partner, with trade volumes last year hitting $147 billion, according to Chinese customs data, up more than 30 percent on 2019.
There are early signs of a bounce in economic activity since the war erupted, with cross-border traders telling AFP they expect Russian demand to tilt eastwards.
"This crisis is an opportunity for Russian companies in China," another Russian entrepreneur based in Beijing told AFP, using the pseudonym Vladimir.
"China is open. They're saying, 'If you want to buy, we have [it],'" he said.

But it has still been a rough few weeks for most Russia-facing businesses in China.
Traders dealing in everything from pesticides to auto parts said wild fluctuations in the value of the ruble have prodded many Russian clients to stop taking new orders.
Others were left racing to find ways to settle accounts in Chinese yuan after the exclusion of Russian banks from the SWIFT system left them unable to make dollar payments.
Meanwhile, shipments have been plagued by delays as major couriers refuse to accept Russia-bound consignments and some routes into the world's largest country are blocked.
"Everyone is waiting for something more predictable," said Beijing-based Vladimir, who specialises in importing Russian foodstuffs into China.
"Everyone is thinking ... the sanctions [might] be cancelled if the war finishes very soon."

China and Russia have become closer in recent years, with Putin notably attending the opening ceremony of the Beijing Winter Olympics last month.
The strongman leader and his Chinese counterpart Xi Jinping declared a relationship of "no limits", sweetened by deals to buy billions of dollars of Russian oil and gas.
At two Russian trading malls in Beijing, stalls that burst with export-ready clothes and fabrics before the pandemic now stand empty behind padlocked doors.
The war and sanctions will affect different industries in different ways, said Shanghai-based Marat, as sectors with high entry and operational costs — chemicals, for instance — are likely to fare better than cheaper, faster-moving consumer goods.
Chinese business owners are divided on what the future holds, with many braced for a sharp fall in Russian spending power.
But others see the long-term benefits for China of a Russian economy desperate for partners.
That also goes for Chinese businesspeople working inside the world's largest country.
"It's definitely good for China that Russia has fallen under Western sanctions," Chi Dashuai, a 38-year-old e-commerce platform operator told AFP from his Moscow base.
Chinese firms could rush to set up processing plants for semi-finished goods in Russia if Moscow makes it easier to do business there, he said.
"The gains for China will outweigh the losses in the long run," he said.
By Matthew WALSH
© Agence France-Presse

Tweets by @forbesindia
Content is the key to the kingdom, as competition intensifies amid new-age brands
Photo of the day: Rising to the challenge