Cut 'all links' between Russia and global financial system: EU

European Union leaders spoke about isolating Russia financially and dry up its financing in further sanctions; removing the Kremlin from SWIFT system 'on the table' too 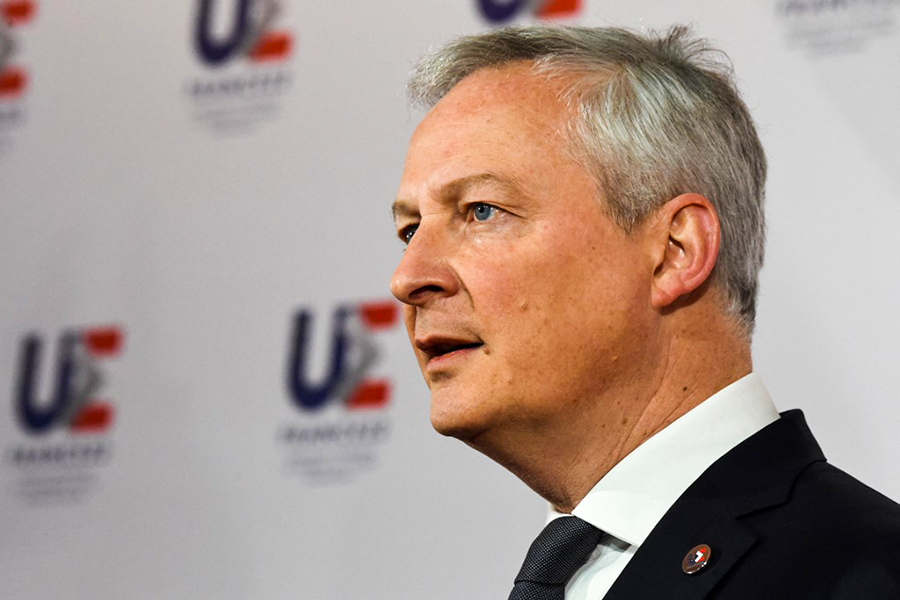 French Economy and Finance Minister Bruno Le Maire speaks to the press with German Finance Minister (unseen) about Russia's invasion of Ukraine at the Economy Ministry in Paris on February 25, 2022, prior to the start of an informal Ecofin and Eurogroup meeting. (Photo by Eric PIERMONT / AFP)The European Union wants to cut all links between Russia and the global financial system, France's finance minister said on Friday, adding that removing Moscow from the SWIFT interbank system remained a "last resort".
Speaking hours after European national leaders agreed further sanctions on Russia over its attack on Ukraine, Bruno Le Maire said the EU "wants to cut all the links between Russia and the global financial system".
"We want to isolate Russia financially... We want to dry up the financing," he added as European finance ministers met in Paris to discuss the economic measures.
Both Le Maire and his German counterpart Christian Lindner said that removing Russia from the Belgium-based SWIFT system remained "on the table".
"This is the very last resort, SWIFT, but this is one of the options that remains on the table," the French minister said.

But Lindner insisted that "we already have a complete blockade of Russian banks, which means business dealings with Russia are as good as stopped."
Reacting Thursday to sanctions decided by the EU, Britain, the United States and other Western nations, Ukrainian President Volodymyr Zelensky said "the pressure on Russia must increase" from what has already been announced.
"Not all possibilities for sanctions have been exhausted yet," he added.
Foreign Minister Dmytro Kuleba had been more explicit Thursday, writing on Twitter that "who now doubts whether Russia should be banned from SWIFT has to understand that the blood of innocent Ukrainian men, women and children will be on their hands too."

SWIFT's messaging system allows banks to communicate rapidly and securely about transactions, and cutting Russia off would cripple its ability to trade with most of the world.
Iran has been disconnected from the system in the past over its nuclear programme, while Moscow has been developing domestic financial infrastructure to counter just such a threat, including the SPFS system for bank transfers and the Mir card payments system.
Cutting off Russia could complicate remaining trade with Europe, including natural gas imports vital to the continent's energy supply as well as oil shipments.
While emphasising that Europe must be ready to make hard choices to confront Russia, Le Maire said Thursday that Paris would protect French households from any resulting increase in energy prices.
And Lindner spelled out that "in one-off cases payments (to Russia) remain possible, for example to pay for gas deliveries".
Berlin this week said it would halt certification of a new pipeline bringing gas from Russia known as Nord Stream 2, but an existing direct link remains in operation.
Lindner added that "further steps are possible but their consequences must be weighed, the idea is to inflict consequences on the Russian economy" rather than cause harm to Europe.
© Agence France-Presse

Tweets by @forbesindia
Is artificial intelligence an artist like any other?
National Education Policy needs to strengthen core engineering disciplines for the success of Industry 4.0