With its shows, Netflix seems to have extended its reign beyond streaming, calling the shots for our wardrobes to the point of influencing our buying behaviour 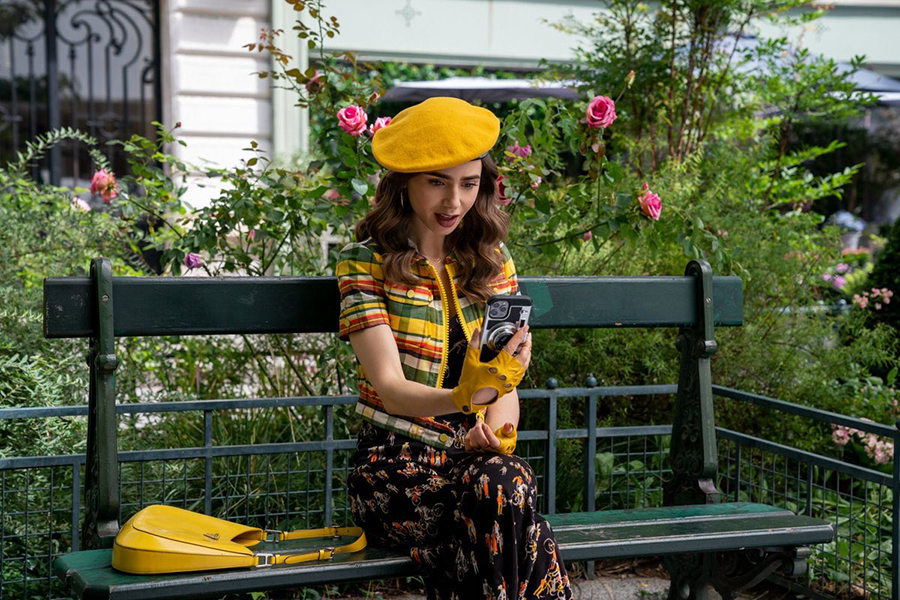 Viewers can procure items to dress like characters in 'Emily in Paris' season 2.
Image: StephanieBranchu / Netflix

What do "Emily in Paris," "Squid Game," and "Bridgerton" have in common? They are all series shown on Netflix, and all three have influenced fashion trends in recent months. The platform seems to have extended its reign beyond streaming, calling the shots for our wardrobes to the point of influencing our buying behavior. Corsets, retro tracksuits, berets, and bell-bottoms are among the pieces that have made an unlikely comeback this year under the streaming giant's leadership.

Successive lockdowns and social distancing measures plus Netflix's considerable global impact have turned us into series addicts, moving from one binging session to another faster than our videoconferences with the boss. And that's all it took for the streaming giant's creations to start seriously influencing our buying habits, especially in fashion. From the period pieces of "Bridgerton," including constricting corsets, to the minimalist sweatsuits and sneakers of "Squid Game" and the perfect '70s style of "Halston" and "The Serpent," our wardrobes began to resemble those of our fictional heroes, even when the clothes in question probably didn't really belong there.

However, we're not talking major trends here, but rather micro-trends, which sometimes fade as quickly as they arrive. Nevertheless, throughout the year there have been countless of these, sometimes even giving birth to new styles. If cottagecore was born from a renewed interest in the farm and the countryside—thanks to the pandemic!—regencycore and royalcore, to name a few, can indeed be traced to Netflix series "Bridgerton" and "The Crown."

It's clear that the streaming giant has a major impact on current trends. A phenomenon on a level that hasn't been seen since the success of "Gossip Girl" and "Sex and the City," but both shows were directly related to fashion, unlike "Squid Game," which, at first glance, appears to have nothing to do with Fashion Week. The phenomenon is such that some actors of the fashion industry, aware of the power of these series as influencers, are starting to make their own small screen productions.

Designers and major labels are beginning to get in on the game themselves, starting with Gucci, which has featured one of its collections in a mini-series co-directed by filmmaker Gus Van Sant. Meanwhile Balmain, under the leadership of its creative director Olivier Rousteing, this summer announced the launch of its own mini-series in partnership with the British television channel Channel 4. If you're going to stage your creations in an entertainment offering, you might as well do it in your own universe. Of course it's even more effective when the series in question is watched by tens of millions of viewers.

Stella McCartney has partnered with Netflix's hit series "Sex Education" for a good cause, creating an exclusive short film and T-shirt for a Breast Cancer Awareness 2021 campaign. The influential power of these dramas can not only sell but also support worthy causes and raise awareness among younger generations—a force for good. There is no doubt that other industry players will progressively jump into this arena, which shows significant promise.

Are TV shows the virtual shop of the future?

Not content to simply influence fashion, Netflix shows could be transformed into full-scale advertising campaigns, or even, into real virtual clothing showcases. If you used to have to search for hours, even days, to find the shoes worn by Carrie Bradshaw, new technology now allows you to add an item to your closet at the end of an episode, if not during! Netflix recently partnered with ViacomCBS Consumer Products to allow fans of the series "Emily in Paris" to buy the clothes, accessories, shoes and bags worn by Emily Cooper (played by Lily Collins) in season 2 of the hit series.

The designs will be offered for sale on Netflix.shop, Saks.com, and other fashion platforms. A first! With season 1 tallying up some 50 million viewers, the fashion pieces in question should be snapped up like hotcakes and inspire others to go a similar route. In a circular kind of logic, major fashion labels could carve out more visibility in TV series—and make more frequent appearances. Because we mustn't forget that many of the outfits—period costumes in particular—seen in such shows are unique pieces created specifically for these fictional worlds.

Former Vogue editor Sara Klausing could help change that with the Seek platform. This e-shop makes it possible to find clothes and beauty products that appear in the most popular TV shows and movies in just a few clicks. And when the creations cannot be found, the expert picks a selection of pieces that are very similar.

For "Gossip Girl," there is the Baguette bag by Fendi, a pair of Christian Louboutin heels, and a pair of Stuart Weitzman thigh-high boots, while "Squid Game" is associated with the ubiquitous Slip-ons from Vans. Everything is brought together on one platform, making it much easier for TV addicts and fashionistas alike to find what they're looking for. These kinds of retail outlets are set to garner attention, and we should see more of the kind quickly sprouting up in the months to come, as the market seems to be ready. And so it would seem that this time it's reality that is outdoing fiction.

After the global shock of covid in 2020, the world was looking ahead to a calmer and more united post-covid reality. But ultimately it's a digital, hybrid existence that has taken the lead, where screens have become essential in all our activities, from education to work, our love lives and what we buy. This accelerated virtualization makes us nostalgic for pre-covid times, for an idealized vision of nature and the world. And this is how the metaverse and newstalgia have come to co-exist in our 2022 predictions. Check out all the incoming trends in our 2022 After Calendar.