Health authorities reported 4,770 new infections across the country, the bulk in the northeastern province of Jilin, as the city of Shenyang in neighbouring Liaoning province was ordered to lock down late Monday 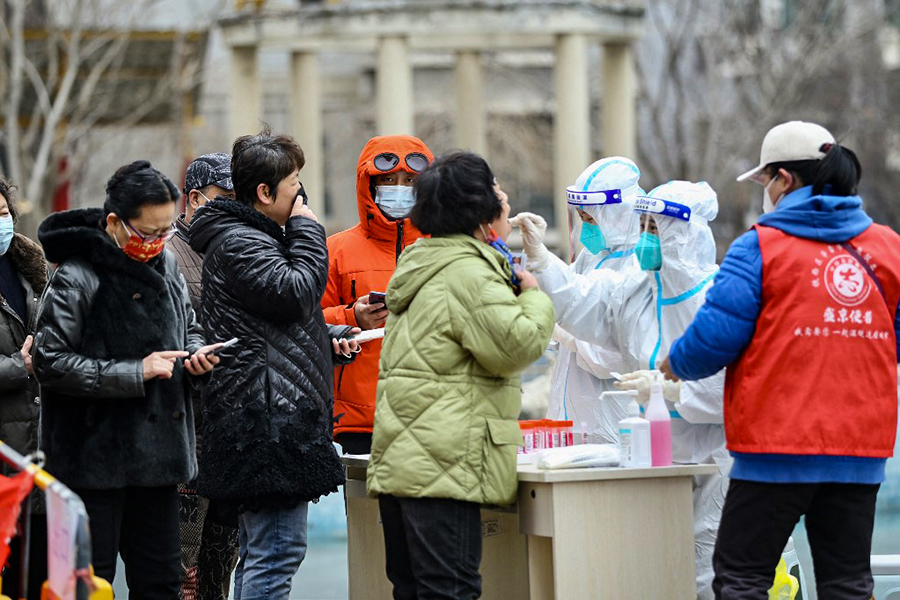 This photo taken on March 14, 2022 shows a resident underging a nucleic acid test for the Covid-19 coronavirus in Shenyang, in China's northeastern Liaoning province. (Credit: AFP)

Beijing, China: China locked down an industrial city of nine million people overnight and reported more than 4,000 virus cases on Tuesday, as the nation's "zero-Covid" strategy is confronted by an Omicron wave.
Health authorities reported 4,770 new infections across the country, the bulk in the northeastern province of Jilin, as the city of Shenyang in neighbouring Liaoning province was ordered to lock down late Monday.
China has moved fast in recent weeks to snuff out virus clusters with a pick-and-mix of hyper-local lockdowns, mass testing and citywide closures. It reported two Covid-19 deaths on Saturday, the first in over a year.
Authorities have warned of the risk posed to growth by persistent lockdowns as the country strives to balance the health crisis with the needs of the world's second biggest economy.

Shenyang, an industrial base home to factories including carmaker BMW, reported 47 new cases Tuesday as authorities put all housing compounds under "closed management" and barred residents from leaving without a 48-hour negative test result.
Last week Chinese President Xi Jinping stressed the need to "minimise the impact" of the pandemic on China's economy, but also urged officials to "stick to" the current zero-Covid approach.
But Beijing's virus playbook has been stretched to the limit by the latest Omicron surge, which has forced authorities to free up hospital beds from mild-symptom patients.
Some cities such as Shanghai have avoided a full lockdown and instead imposed a web of individual building lockdowns, even as new daily asymptomatic infections there spiral into the hundreds.
Jilin provincial officials announced Monday that the first 10,000 doses of Pfizer's oral Covid drug arrived on Sunday, marking the first time Paxlovid has been used in China.
The province last week imposed strict travel curbs banning locals from leaving their cities and counties, while several cities have already confined residents at home.
The southern tech powerhouse of Shenzhen on Monday announced it would lift its week-long lockdown "in an orderly manner", after having partially eased measures on Friday to minimise the impact of virus shutdowns on factories and ports.
Health officials last week revealed only around half of Chinese aged over 80 have been double-vaccinated, as the spectre of Hong Kong's dire Covid mortality rates — mainly among the unvaccinated elderly — hangs over Beijing's decision making.
© Agence France-Presse

Tweets by @forbesindia
Infosys only Indian co in Ethisphere 2022 list; crypto startups dismayed over tax clarification; CommerceIQ turns unicorn
Content is the key to the kingdom, as competition intensifies amid new-age brands