Russian oligarch Roman Abramovich, an ally of President Vladimir Putin and an intermediary in peace talks, suffered symptoms including impaired vision and peeling skin after the session in early March; several other officials participating in the same session contracted similar symptoms, a person close to President Volodymyr Zelenskyy of Ukraine told The New York Times

By Tariq Panja and Valerie Hopkins 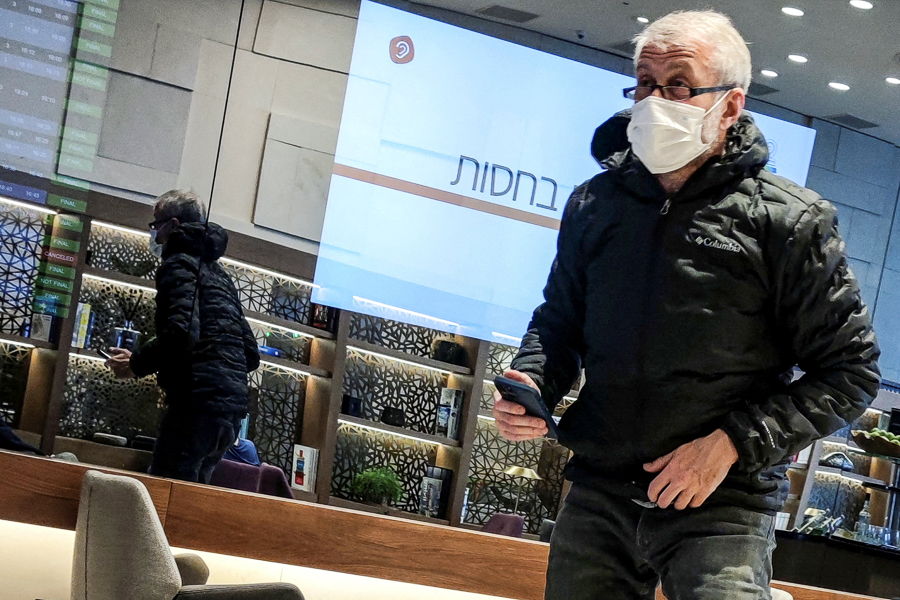 Sanctioned Russian oligarch Roman Abramovich stands in a VIP lounge before a jet linked to him took off for Istanbul from Ben Gurion international airport in Lod near Tel Aviv, Israel, March 14, 2022. Image: Stringer / Reuters

The sporadic and so-far unproductive talks to end the fighting between Russia and Ukraine produced a bizarre new development Monday involving a Russian oligarch, a group of officials from both countries and suspicions of a potential poisoning at a negotiating session early this month.

The details were murky and difficult to sort out amid claims and counterclaims. But by day’s end, the flurry of allegations and suspicions was drawing notice in world capitals and online, and adding another level of intrigue to peace talks that have produced plenty of mixed messages and only limited progress.

The oligarch, Roman Abramovich, an ally of President Vladimir Putin of Russia and an intermediary in peace talks, suffered symptoms including impaired vision and peeling skin after the session in early March, a person close to the Russian billionaire said Monday. He recovered quickly, but Abramovich and his aides suspected the cause of the symptoms might be intentional, said the person, who insisted on anonymity to disclose private information.

Several officials participating in the same session contracted similar symptoms, a person close to President Volodymyr Zelenskyy of Ukraine told The New York Times. All the people affected took medication and felt fine within a day or two, said the person, who also insisted on anonymity because of the sensitive nature of the episode.

The Kremlin did not immediately respond to requests for comment. Ukrainian officials warned against sensationalism. No one produced any evidence of foul play.

American officials, for their part, seemed mystified. Some American officials said the situation around the negotiating team was unclear and were not in a position to confirm what might have happened.

But another American official, briefed on intelligence reports, said the incident appeared to be environmental, something like run-of-the mill food poisoning, rather than some kind of chemical agent.

The suspicions of poisoning first emerged Monday when The Wall Street Journal reported that Abramovich; a Ukrainian official, Rustem Umerov; and another negotiator had suffered vision problems, including swollen eyes and some peeling skin, after talks in Kyiv, Ukraine, on March 3. The Journal article cited an investigation into the episode by Bellingcat, an open-source investigative outlet, that released some details in a series of tweets.

Russia has been accused of poisoning its opponents in the past, most notably when opposition leader Alexei Navalny became severely ill in August 2020. The Kremlin denied involvement, but Navalny, with the assistance of the same Bellingcat journalist working on the investigation into the episode with Abramovich, implicated high-level Russian intelligence operatives in his poisoning.

Abramovich and another Russian entrepreneur met with Umerov in Kyiv for negotiations that lasted until about 10 p.m., Bellingcat said.

“I’m fine,” Umerov wrote. “This is my response to all the yellow news spreading around,” he added, a reference to sensationalistic, or “yellow journalism.” He said that there is an “informational war ongoing as well.”

Abramovich, who owns the Chelsea soccer team, has long-standing ties to Putin — a relationship that has earned him rebuke from the European Union and the British government, which froze his assets.

The accusation of poisoning came on the eve of a fresh round of talks set to take place Tuesday in Istanbul. Abramovich, who became involved in talks aimed at ending the war soon after Russia invaded Ukraine, has spent the past weeks shuttling among Belarus, Ukraine and Moscow in the hopes of reaching an agreement.

Turkey has been mediating a parallel round of talks, and Umerov, a Crimean Tatar who speaks both Russian and Turkish, has been representing Kyiv in the Turkey-mediated discussions, according to the Times of London.

Tweets by @forbesindia
How IPO-bound LIC's brand is built on trust
Photo Of The Day: Onwards