After weathering the Brexit and Covid-19 storms, thousands of Britain's fish and chips shops could be sunk by the war in Ukraine 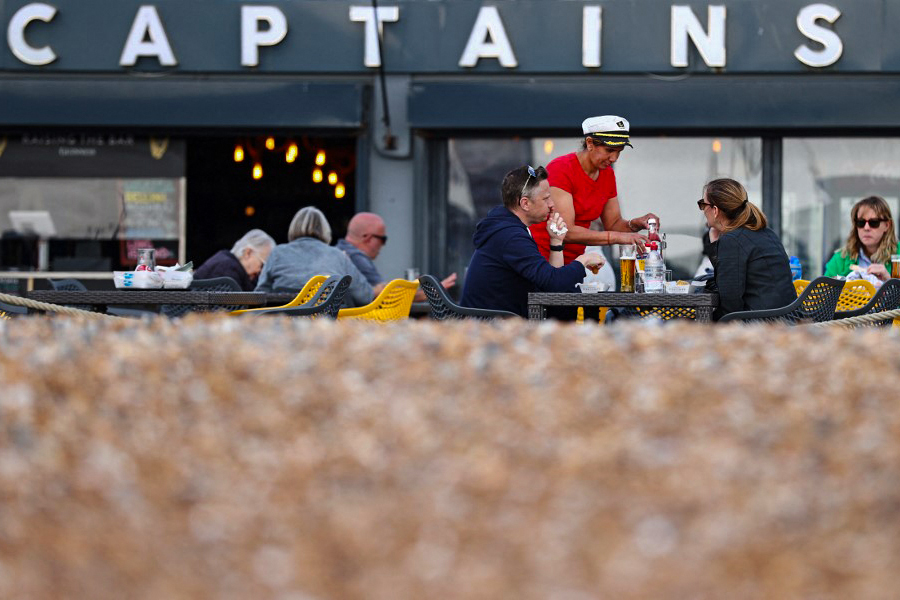 Fish and Chip shop owner Pam Sandhu (4R) serves customers as they sit and eat lunch outside of Captain's Fish and Chips shop in Brighton on March 25, 2022. Britain's fish and chip shops have weathered the storm of Brexit and Covid, and are fighting the tide of rising inflation but thousands could be sunk by the war in Ukraine. (Credit: ADRIAN DENNIS / AFP)

Brighton, United Kingdom: They have weathered the storm of Brexit and Covid, and are fighting the tide of rising inflation. But thousands of Britain's fish and chip shops could be sunk by the war in Ukraine.
At Captain's, in the seaside resort of Brighton, on England's south coast, owner Pam Sandhu is normally not one to complain.
Yet the shelves of her large refrigerators are empty when they should be full of fresh white fish ready to be dipped in batter and deep fried, then served to hungry customers with piping hot chips. 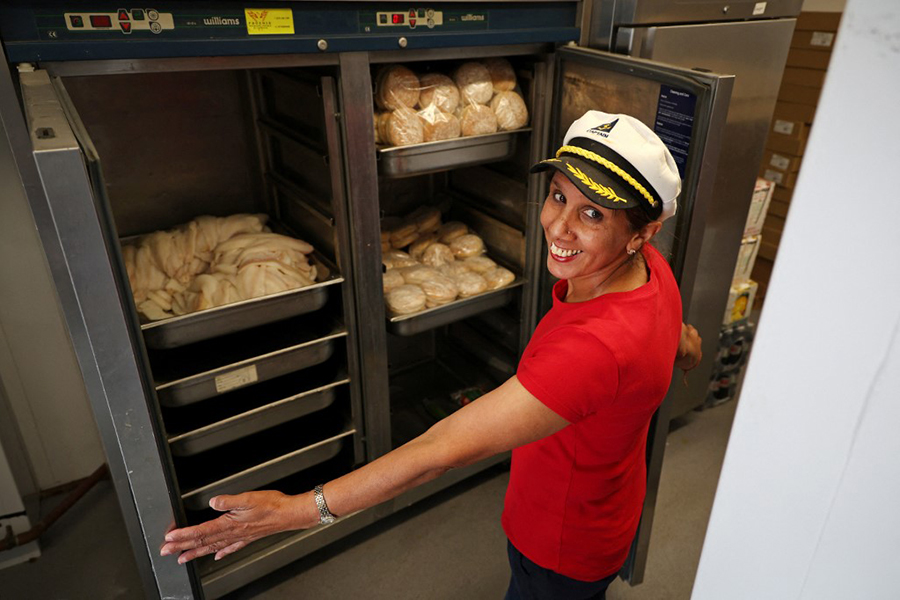 Captain's Fish and Chip shop owner Pam Sandhu, shows the contents of a freezer before opening for business in Brighton on March 25, 2022. The shelves of her large freezers are empty when they should be full of white fish ready to be dipped in batter and deep fried, then served to hungry customers with piping hot chips. "With the war in Ukraine, there's no fish left, only a small amount," she told AFP. (Credit: ADRIAN DENNIS / AFP)
In ordinary times, Russia supplied between 30 and 40 percent of the fish sold in British fish and chip shops, mostly cod and haddock, said Andrew Crook, president of the National Federation of Fish Friers (NFFF).

Ukraine is the world's biggest exporter of vegetable oil, which is used for deep frying what the NFFF calls Britain's "undisputed national dish".
"With this war in Ukraine, there is no fish available or a very small amount," Sandhu told AFP. "Before we were ordering in large quantities.
"Now there is only a minimum order that we can get. The price has doubled from what we paid last year."
The vegetable oil has also become hard to come by, she added, and meanwhile the UK's introduction in mid-March of a 35 percent tariff on the import of white fish from Russia has begun to bite.
At the same time, fish and chip shop proprietors are also being hit by rising energy prices.
On a sunny spring Friday in late March, Sandhu was worrying whether she would even have enough fish to get through the weekend.
She has been in the business for 30 years, often working seven days a week, and said she has never known as many problems with supplies or pressure on costs.
Sandhu's restaurant has a terrace that looks out onto Brighton's pebble beach and pier. She bought it three years ago and had planned to open in March 2020.
Then came Covid, followed by rising inflation and now the war in Ukraine and sanctions against Russia. It's been the perfect storm for fish and chips vendors.

Fish and chips, first served as a single dish in the 1860s, has long been a working-class staple, although demographic and dietary changes have seen its popularity wane in recent years. 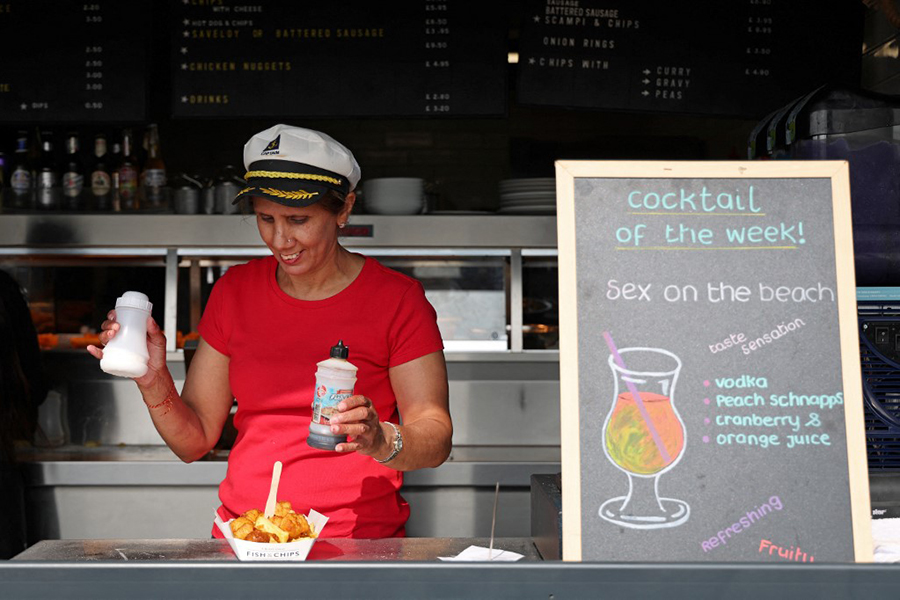 Fish and Chip shop owner Pam Sandhu serves fish and chips at Captain's Fish and Chip shop in Brighton on March 25, 2022. (Credit: ADRIAN DENNIS / AFP)
The takeaway favourite, covered in lashings of salt and vinegar, used to be wrapped in old newspaper and is typically served with mushy peas or tartare sauce.
"We've always been seen as a cheap meal so our margins have always been quite low and we work on volume," said the NFFF's Crook.
"Unfortunately now with the inflationary price it is very difficult to protect your margins, in fact they're wiped out."
Crook, a fish and chip shop owner in Lancashire, northwest England, has increased his prices by 50 pence ($0.66, 0.58 euros) a portion to £8.50. 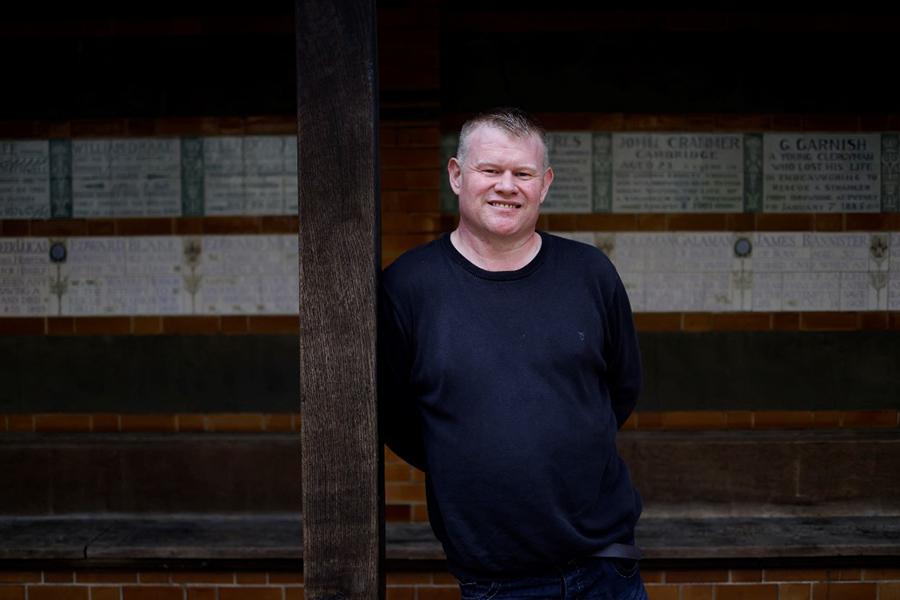 President of the National Federation of Fish Friers Andrew Crook poses for photographs in central London, on March 28, 2022. Britain's fish and chip shops have weathered the storm of Brexit and Covid, and are fighting the tide of rising inflation but thousands could be sunk by the war in Ukraine. (Credit: ADRIAN DENNIS / AFP)
Fish has became even more expensive because some British trawlers are staying in port due to the high cost of fuel.
"It's just not worth them going out and setting sail, so that's further pressure on the supply of fish and it's driving pressure further north," he explained.
Meanwhile sales tax (VAT) is going back up to 20 percent having been cut to 12.5 percent during the pandemic.
All of which could put as many as 3,000 of the country's 10,000 fish and chip shops out of business, said Crook.
"It will probably happen in the next six months. I think there is going to be that much pressure on people," he predicted.

Sandhu is hoping that her reputation and the quality of her fish and chips will help her ride out the storm.
She has not increased her prices but is keeping a close eye on her competitors.
"We have to keep the customer happy but I can't work for nothing. I have a home to feed," she added.
Cheaper hamburgers, hot dogs and sausage rolls are now on the menu.
But regular customer Sharon Patterson said she will keep coming, whatever happens.
"Fish and chips have been part of my world ever since I existed," she said, sitting on the terrace alongside her mother, who is in her eighties.
"We do have to keep supporting all our local businesses and as long as I can afford it, I will come down and have fish and chips whenever I can.
"It's part of my growing up. It's part of my culture."
By Brigitte DUSSEAU
© Agence France-Presse