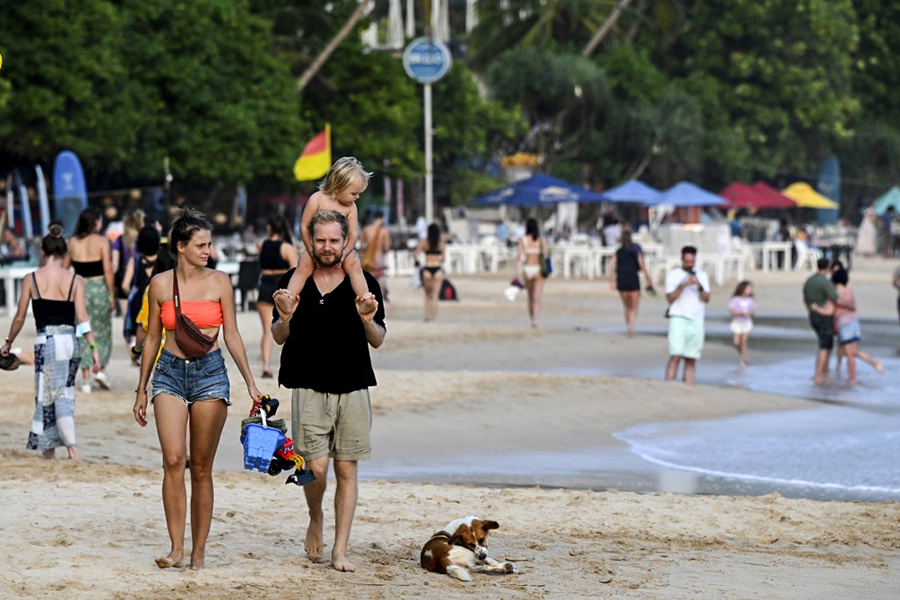 In this picture taken on March 25, 2022, tourists walk along a beach in Mirissa, a small town on the south coast of Sri Lanka. Tourism became crucial to the economy — its pandemic-enforced closure underlies the foreign exchange shortage that is the root cause of the current situation. (Credit: Ishara S. KODIKARA / AFP)

Mirissa, Sri Lanka: In a Sri Lankan beach guesthouse blacked out by a power cut, the owner's son illuminates a printed Wifi password with his phone for two European backpackers. A moment later the trio grasp the gesture's futility.
Electricity stoppages, petrol queues and escalating protests are threatening hopes that a tourism revival could help arrest the island nation's intensifying financial crisis.
After being ravaged by civil war for decades the country's coconut palm-lined beaches and exotic wildlife more recently made it a popular stomping ground for both high-end globetrotters and budget travellers.
Tourism became crucial to the economy—its pandemic-enforced closure underlies the foreign exchange shortage that is the root cause of the current situation.

But now the effects of the crisis are putting in jeopardy the industry that is a key element of any possible solution, with many smaller operators expecting to hit the wall soon.
"Because of the power cuts, we can't serve our customers," the darkened hostel's owner Dilip Sandaruwan told AFP. "They're not satisfied and they're asking for lower prices."
His guesthouse a short walk from the beach in the languid coastal town of Mirissa has few reservations, and his family are struggling to pay the interest on borrowings taken to weather the Covid years — let alone the principal.
"We are always tense," Sandaruwan said. "We don't know how to pay back our loans, but the banks are putting a lot of pressure on us."
Similar tales of woe echo among business owners up and down Mirissa's back lanes.
Guests gripe about sweating through tropical nights without air conditioning, hoteliers cannot access online booking platforms, and restaurants fret over how to cater to western tastes when they struggle to source imported coffee.
Worsening fuel shortages are making it harder to move around the country, with long lines of motorbike taxis snarled outside service stations waiting for scarce petrol.
"I never let the foreigners know that there is a problem with the fuel," said motorboat tour company owner Pradeep Chandana De Silva.
He sends staff out before dawn each day to hunt for diesel to ferry tourists across the mangrove lagoons of Balapitiya, pointing out cormorants and baby crocodiles along the way.
"At the moment the situation is okay, but if there's longer queues and less fuel, it will be terrible for the entire industry," he said.

Shortages are making daily life miserable for many in Sri Lanka and resentment is flaring, with security forces deployed around Colombo Friday after protesters attempted to storm the president's home overnight.
But bewildered foreign adventurers often arrive without knowledge of the crisis, or a grasp of its scale.
"Everyone here is telling you, 'Hey, we have a lot of problems with gas, fuel, electricity and stuff like that'," said Nick Reiter, a German tourist waiting to fill up his rented scooter at a petrol station.
"But right now, this is pretty crazy."
Indian tourist Ayesha Khan said she was unaware of the situation until after booking her flights, and considered cancelling.
"We didn't know a lot until we actually came here," she said, breaking off a romantic sunset walk along Mirissa beach with her husband.
Both knew their driver had waited for hours in petrol lines and said the electricity in their accommodation had regularly cut out without warning, but neither regretted their trip.
"It's been nothing but a good experience for us," said Afnan Syed, Khan's partner.
"I wouldn't mind coming here again."

'Not sufficient at all'

Sri Lankan tourism has been plagued by setbacks before, even after the civil war. Islamist attacks on Easter Sunday three years ago targeted hotels and churches, killing 279 people and leading to a wave of cancellations.
A post-pandemic recovery began late last year, with nearly 100,000 coming in February, around 40 percent of previous peaks.
But late that month Russia invaded Ukraine, halting nearly all visits from the number one and three sources of foreign arrivals.
And now even a fully thriving tourism industry would not be enough on its own for Sri Lanka to claw itself out from under its escalating loan repayments, experts say.
"While tourism has picked up since Covid... it's not sufficient at all," said Suramya Ameresekera, an economist at the JB Securities advisory firm in Colombo.
"The amount that comes due every month is not covered by the size of the tourism receipts," she added. "Even in Sri Lanka’s history when tourism was at its peak... we were still running a current account deficit."
The government is scrambling to insulate holidaymakers from the hardships facing much of the nation's 22 million people. Accredited tour guides are allowed to skip petrol queues — to the occasional chagrin of other drivers waiting in line.
"We found some problems because they are out of petrol," said Spanish tourist Nazareth Marina in Galle's centuries-old Dutch Fort.
But the Sri Lankan people, she added, "treat us really well, so it was really nice to come here now".
By Sean GLEESON and Archana THIYAGARAJAN
© Agence France-Presse