Sri Lanka steps up security as anger over crisis boils over

Hundreds of protesters tried to storm the president's home in a night of violence and anger at a dire economic crisis, as the South Asian nation reels from severe shortages of essentials, sharp price rises and crippling power cuts in its most painful downturn since independence in 1948 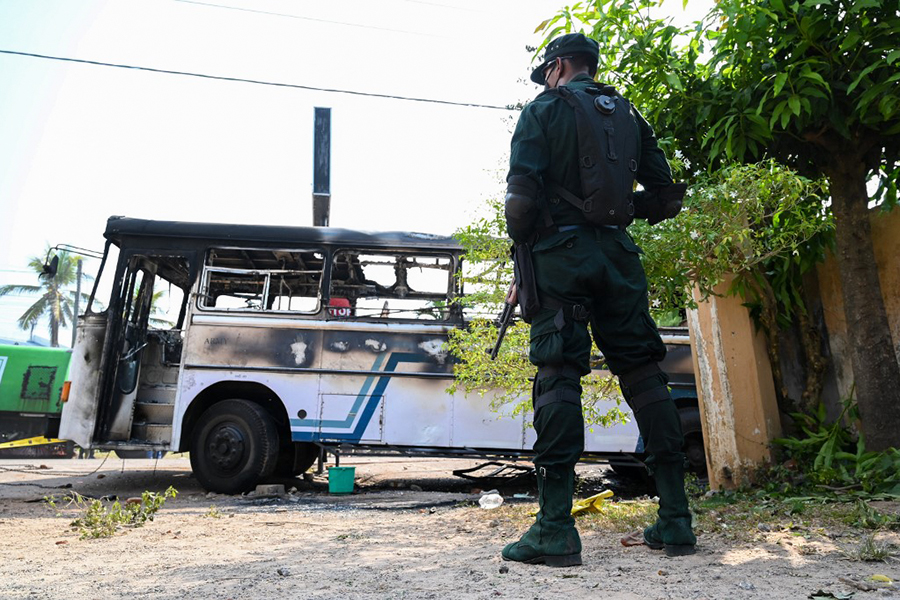 Colombo, Sri Lanka: Sri Lanka's capital was under heavy security on Friday after hundreds of protesters tried to storm the president's home in a night of violence and anger at a dire economic crisis.
The South Asian nation is seeing severe shortages of essentials, sharp price rises and crippling power cuts in its most painful downturn since independence in 1948. Many fear it will default on its debts.
Thursday night's unrest saw hundreds of people, rallied by unidentified social media activists, march on President Gotabaya's home demanding his resignation.
They set two military buses and a police jeep ablaze, threw bricks to attack officers and barricaded a main road into Colombo with burning tyres.
One person was critically injured and police said five officers were hurt in running battles. Forty-five people were arrested.

Security forces fired into the crowd and used tear gas and water cannon to disperse the demonstrators. It was not immediately clear if they used live rounds or rubber bullets.
An overnight curfew was lifted early Friday morning, but police and military presence was beefed up around the city, where a burnt-out wreckage of a bus was still blocking the road to Rajapaksa's house.
Rajapaksa's office said Friday that the protesters wanted to create an "Arab Spring" — a reference to anti-government protests in response to corruption and economic stagnation that gripped the Middle East over a decade ago.
"The Thursday night protest was led by extremist forces calling for an Arab Spring to create instability in our country," the president's office said in a brief statement.
Rajapaksa was not at home during the protest, according to official sources.
A live broadcast by a private television network abruptly stopped after what journalists said was pressure from the government.
But videos shared on social media verified as genuine by AFP showed men and women shouting "lunatic, lunatic go home" and demanding that all members of the powerful Rajapaksa family step down.
The president's elder brother Mahinda serves as prime minister while the youngest Basil is finance minister. His eldest brother and nephew also hold cabinet positions.
Sri Lanka's predicament has been compounded by the Covid-19 pandemic, which torpedoed tourism and remittances.
Many economists also say it has been exacerbated by government mismanagement and years of accumulated borrowing.

Latest official data released Friday showed that inflation in Colombo hit 18.7 percent in March, the sixth consecutive monthly record. Food prices also soared a record 30.1 percent.
Colombo imposed a broad import ban in March 2020 in a bid to save foreign currency needed to repay nearly $7.0 billion this year to service its $51 billion in debts.
Diesel shortages had sparked outrage across Sri Lanka in recent days, but the protests had been in various towns and not aimed at any top leader.
But on Thursday diesel was unavailable at stations across the island, according to officials and media reports.
The state electricity monopoly said it enforced a 13-hour power cuts from Thursday — the longest ever — because it did not have diesel for generators.
Several state-run hospitals have stopped conducting surgeries as they have run out of essential life-saving medicines.
The government has said it is seeking a bailout from the International Monetary Fund while asking for more loans from India and China.
IMF spokesman Gerry Rice told reporters in Washington on Thursday that such talks should begin "in the coming days", with Sri Lanka's finance minister expected in the US capital.
© Agence France-Presse