The fund, which for decades has backstopped countries in financial distress, imposes these fees for loans that are unusually large or long-standing and were designed to help protect against hefty losses from high-risk lending 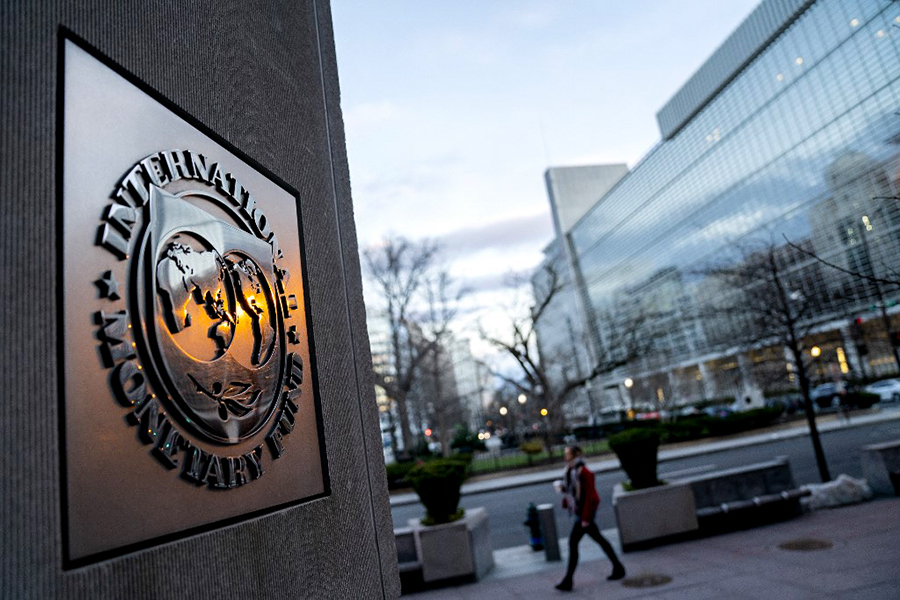 IMF primarily serves as a lender of last resort, although recently it has expanded its mission to include reducing extreme inequality and combating climate change. (Image: Stefani Reynolds / AFP)

At a time when the coronavirus pandemic is fueling a rapid rise in inequality and debt, a growing number of policymakers and economists are pressuring the International Monetary Fund to eliminate extra fees it charges on loans to struggling nations because they siphon away scarce funds that could instead be used to battle COVID.
The fund, which for decades has backstopped countries in financial distress, imposes these fees for loans that are unusually large or long-standing. They were designed to help protect against hefty losses from high-risk lending.
But critics argue that the surcharges come at the worst possible moment, when countries are already in desperate need of funds to provide poverty aid and public health services. Some of the countries paying the fees, including Egypt, Ukraine and Armenia, have vaccinated only about one-third of their populations. The result, the critics argue, is that the IMF ends up undermining the financial welfare and stability of the very places it is trying to aid.

In the latest critique, a letter this week to Treasury Secretary Janet Yellen from 18 Democrats in Congress, including Reps. Alexandria Ocasio-Cortez of New York and Pramila Jayapal of Washington, asked the United States to support ending the surcharge policy.
The surcharge “discourages public health investment by developing countries,” the letter said. “This perverse outcome will undermine global economic recovery.” The letter echoed several other appeals from more than two dozen emerging nations, including Argentina, South Africa and Brazil, as well as economists.
“Attempts to force excessive repayments are counterproductive because they lower the economy’s productive potential,” Nobel Prize-winning economist Joseph Stiglitz and Kevin Gallagher, a professor of global development at Boston University, wrote in a recent analysis. “Both creditors and the country itself are worse off.”
They added, “The IMF should not be in the business of making a profit off of countries in dire straits.”
The fund primarily serves as a lender of last resort, although recently it has expanded its mission to include reducing extreme inequality and combating climate change.
In addition to building up a reserve, the surcharges were designed to encourage borrowers to repay on time. The poorest countries are exempt.
The fees have become a major source of revenue for the IMF, which is funded primarily by its 190 member nations, with the United States paying the largest share. The fund estimates that by the end of this year, borrowers will have shelled out $4 billion in extra fees — on top of their regular interest payments — since the pandemic began in 2020.
The debate over the surcharge is emblematic of larger contradictions at the heart of the IMF’s structure and mission. The fund was created to provide a lifeline to troubled economies so that they recover “without resorting to measures destructive of national or international prosperity.”
But the terms and conditions that accompany its loans have at times ratcheted up the economic pain. “They penalize countries at a time when they are in an adverse situation, forcing them to make greater cuts in order to repay debts,” according to an analysis from the liberal Center for Economic and Policy Research in Washington.
“Demanding these surcharges during an ongoing recession caused by a pandemic goes even more against” the IMF’s founding principles, the center argues.
Voting power in the fund’s governance is based on the size of each country’s monetary contribution, with only the United States having veto power. That means that countries most in need have the least say in how the IMF carries out its role.
In a statement, the Treasury Department reiterated support for the surcharges: “As the IMF’s major shareholder we have an obligation to protect the financial integrity of the IMF.” And it pointed out that the interest rates charged by the fund were often far below market rates.
A review of the surcharges last month by the fund’s executive directors ended without any agreement to halt the charges. An IMF statement explained that while “some directors were open to exploring temporary surcharge relief” to free up resources to deal with the pandemic, most others preferred a comprehensive review later on in the context of the fund’s “overall financial outlook.”
Strapped countries like Argentina that are subject to the surcharges balked earlier at the extra payments, but their campaign has picked up momentum with the spread of COVID-19.
“I think the pandemic makes a big difference,” said Martín Guzmán, Argentina’s minister of economy.
He argues that the pandemic has turned what may have once been considered unusual circumstances into the commonplace, given the enormous debt that many countries have taken on to meet its rising costs. Government debt in emerging countries has hit its highest level in half a century.
The number of nations subject to surcharges increased to 21 last year from 15 in 2020, according to the IMF. Pakistan, Egypt, Ukraine, Georgia, Albania, Tunisia and Ecuador are among those paying.
Argentina, which has long had a contentious and bitter relationship with the fund relating to a series of bailouts and defaults that date back decades, has been a leading opponent of the surcharges.
The country is trying to work out a new repayment schedule for $45 billion that the previous government borrowed as part of a 2018 loan package. By the end of 2024, the government estimates, it will have run up a tab of more than $5 billion in surcharges alone. This year, 70% of Argentina’s nearly $1.6 billion bill from the IMF is for surcharges.
“The charges will be undermining the mission of the IMF, which is to ensure global stability and balance of payments,” Guzmán said.
According to World Bank estimates, 124 million people were pushed into poverty in 2020, with 8 out of 10 of them in middle-income countries.
Meanwhile, the costs of basic necessities like food, heating and electricity are surging, adding to political strains. This week, the IMF warned in its blog that continuing COVID outbreaks, combined with rising inflation, debt and interest rates, mean emerging economies should “prepare for potential bouts of economic turbulence.”