US and IMF apply a financial squeeze on the Taliban

About $7 billion of the Afghan central bank's $9 billion in foreign reserves are held by the Federal Reserve Bank of New York, and the Biden administration has already moved to block access to that money

By Eshe Nelson and Alan Rappeport 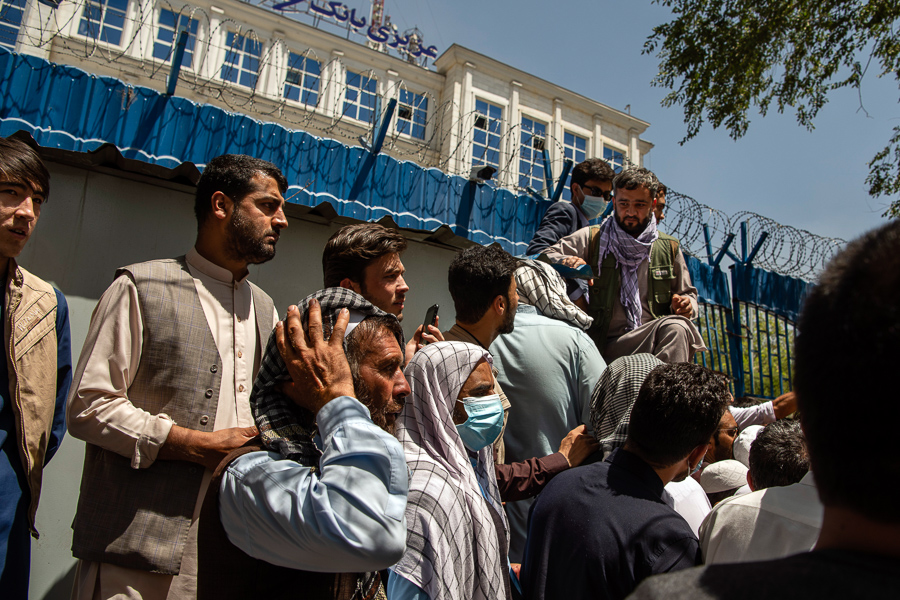 People gather in front of a bank in Kabul to withdraw money as the Taliban enters the capital city on Sunday, Aug. 15, 2021. The former acting governor of the Afghan central bank, who has fled the country, said on Wednesda, Aug. 18, 2021, that nearly all of the bank’s $9 billion in reserves were beyond the reach of the Taliban. Image: Kiana Hayeri/The New York Times

Despite the chaotic end to its presence in Afghanistan, the United States still has control over billions of dollars belonging to the Afghan central bank, money that Washington is making sure remains out of the reach of the Taliban. About $7 billion of the central bank’s $9 billion in foreign reserves are held by the Federal Reserve Bank of New York, the former acting governor of the Afghan central bank said Wednesday, and the Biden administration has already moved to block access to that money.

The Taliban’s access to the other money could also be restricted by the long reach of U.S. sanctions and influence. The central bank has $1.3 billion in international accounts, some of it euros and British pounds in European banks, the former official, Ajmal Ahmady, said Wednesday. Remaining reserves are held by the Swiss-based Bank for International Settlements, he added.  Ahmady said earlier Wednesday that the Taliban had already been asking central bank officials where the money was.  “We can say the accessible funds to the Taliban are perhaps 0.1% to 0.2% of Afghanistan’s total international reserves,” he wrote on Twitter. “Not much.”  Other funding has been undermined. The International Monetary Fund said Wednesday that it would block Afghanistan’s access to about $460 million in emergency reserves. The decision followed pressure from the Biden administration to ensure that the reserves did not reach the Taliban.  Money from an agreement reached in November among more than 60 countries to send Afghanistan $12 billion over the next four years is also in doubt. Last week, Germany said it would not provide grants to Afghanistan if the Taliban took over and introduced Islamic law, and on Tuesday, the European Union said no payments would go to Afghanistan until officials “clarify the situation.”  The central bank money and international aid, essential to a poor country where three-quarters of public spending is financed by grants, are powerful leverage for Washington as world leaders consider if and when to recognize the Taliban takeover.  Ahmady, who fled Afghanistan on Sunday, said he believed the Taliban could get access to the central bank reserves only by negotiating with the U.S. government.  Other sources of funding would be difficult to obtain. The Taliban could seek financial support from China, with which it held high-profile talks last month. But so far, China hasn’t shown an eagerness to increase its role in Afghanistan. The Taliban could try to take advantage of the country’s vast mineral resources through mining, or finance operations with money from the illegal opium trade. Afghanistan is the world’s largest grower of poppies used to produce heroin, according to data from the United Nations Office on Drugs and Crime.  But these alternatives are all “very tough,” Ahmady said. “Probably the only other way is to negotiate with the U.S. government.”  Afghanistan has about $700 million at the Bank for International Settlements, Ahmady said. The bank, which serves 63 central banks around the world, said Wednesday that it “does not acknowledge or discuss banking relationships.”  On Wednesday, Ahmady wrote on Twitter that Afghanistan had relied on shipments of U.S. dollars every few weeks because it had a large current account deficit, a reflection of the fact that the value of its imports are about five times greater than its exports.  Those purchases of imports, often paid in dollars, could soon be squeezed.  “The amount of such cash remaining is close to zero due a stoppage of shipments as the security situation deteriorated, especially during the last few days,” Ahmady wrote.  He recalled receiving a call Friday saying the country wouldn’t get further shipments of U.S. dollars. The next day, Afghan banks requested large amounts of dollars to keep up with customer withdrawals, but Ahmady said he had to limit distributions to conserve the central bank’s supply. It was the first time he made such a move, he said.  Ahmady said he had told President Ashraf Ghani about the cancellation of currency shipments and that Ghani had then spoken with Secretary of State Antony Blinken. Although further shipments were approved “in principle,” Ahmady said, the next scheduled shipment, on Sunday, never arrived.  “Please note that in no way were Afghanistan’s international reserves ever compromised,” he wrote.  One way central banks use reserves is to intervene in foreign exchange markets to keep their own currency stable. Over the past year, the Afghan central bank kept the exchange rate for the national currency, the afghani, between 77 and 78 to the U.S. dollar, Ahmady said. But the exchange rate started to weaken about a month ago, and on Wednesday, the afghani reached a record low of 86 to the U.S. dollar, according to Bloomberg data.  Although Ahmady has left the country, he said he believed that most members of the central bank’s staff were still in Afghanistan.  If the Taliban can’t gain access to the central bank’s reserves, it will probably have to further limit access to dollars, Ahmady said. This would help start a cycle in which the national currency would depreciate and inflation would rise rapidly and worsen poverty.  “They’re going to have to significantly reduce the amount that people can take out,” Ahmady said. “That’s going to hurt people’s living standards.”  The more than $400 million from the International Monetary Fund, which the Biden administration has sought to keep out of the Taliban’s hands, is Afghanistan’s share of a $650 billion allocation of currency reserves known as special drawing rights. It was approved this month as part of an effort to help developing countries cope with the coronavirus pandemic.  But the toppling of Afghanistan’s government and a lack of clarity about whether the Taliban will be recognized internationally put the IMF in a difficult position.  “There is currently a lack of clarity within the international community regarding recognition of a government in Afghanistan, as a consequence of which the country cannot access SDRs or other IMF resources,” the organization said in a statement Wednesday. It added that its decisions were guided by the views of the international community.