Rapid expansion was expected for China, at 8.1%, and India, 9.5%, but both of their outlooks have been downgraded since April 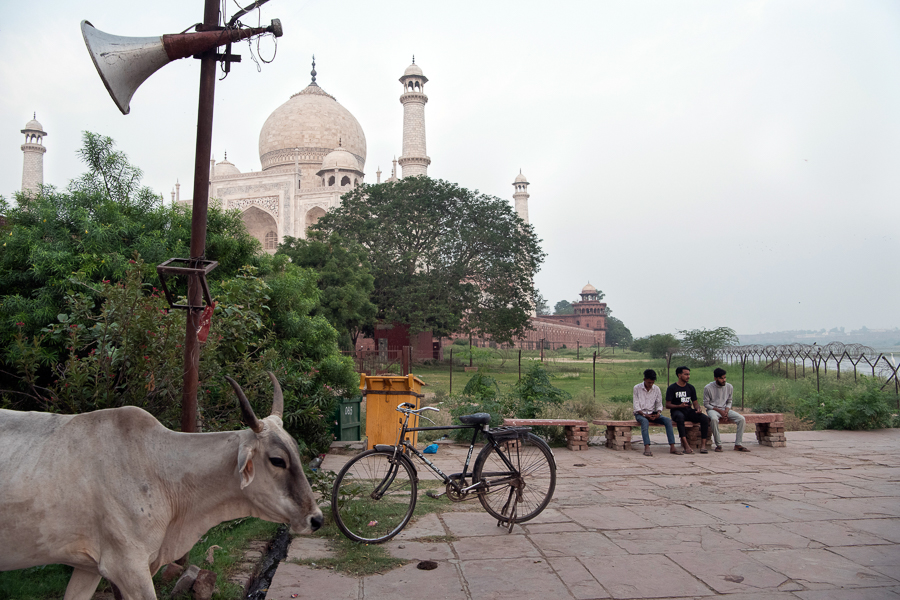 Visitors sit in a plaza near the Taj Mahal in Agra, India, on June 24, 2021. The International Monetary Fund’s outlook for India was downgraded because of a severe second wave of the virus slowing the economic recovery; Image: Saumya Khandelwal/The New York Times

The International Monetary Fund warned on Tuesday that the gap between rich and poor countries was widening amid the pandemic, with low vaccination rates in emerging economies leading to a lopsided global recovery.The IMF maintained its 2021 global growth forecast of 6% in its latest World Economic Outlook report, largely because advanced economies, including the United States, expect slightly faster growth than the global body previously forecast. Economic growth in developing countries is expected to be more sluggish, and the global body said the spread of more contagious variants of the virus posed a threat to the recovery. It called on nations to work together to accelerate the protection of their citizens.“Multilateral action is needed to ensure rapid, worldwide access to vaccines, diagnostics and therapeutics,” Gita Gopinath, the IMF’s chief economist, wrote in the report. “This would save countless lives, prevent new variants from emerging and add trillions of dollars to global economic growth.”The IMF projected that the U.S. economy will expand 7% in 2021. The euro area was projected to expand 4.6% and Japan 2.8%. Rapid expansion was expected for China, at 8.1%, and India, 9.5%, but both of their outlooks have been downgraded since April. The outlook in China was lowered because of a scaling back of public investment, while India was downgraded because of a severe second wave of the virus slowing the recovery.The global expansion in 2022 was projected to be stronger than previously forecast, with growth of 4.9%. That, too, will be led by advanced economies, the IMF predicted.More than a year after the coronavirus emerged, economic fortunes are closely tied to how successfully governments have been at providing fiscal support and acquiring and deploying vaccines. The IMF said about 40% of the population in advanced economies had been fully vaccinated, while that figure is just 11% or less in emerging markets and low-income developing economies. Varying levels of financial support from governments are also amplifying the divergence in economic fortunes.The IMF’s executive board announced this month that it had approved a plan to issue $650 billion worth of reserve funds that countries could use to buy vaccines, finance health care and pay down debt. If finalized in August, as expected, the funds should provide additional support to countries that have been lagging behind in combating the health crisis.

Concerns about price increases have grabbed headlines in the United States and elsewhere, but the IMF said it continued to believe that the recent bout of inflation was “transitory.” The organization noted that jobless rates remained below their prepandemic levels and that long-term inflation expectations remained “well anchored.” Gopinath said that predicting the path of inflation was subject to much uncertainty because of the unique nature of the economic shock that the world had faced.“More persistent supply disruptions and sharply rising housing prices are some of the factors that could lead to persistently high inflation,” Gopinath said.As the Federal Reserve prepared to meet on Tuesday and Wednesday, she advised central banks to be nimble in setting monetary policy and urged them not to raise interest rates too soon.“Central banks should avoid prematurely tightening policies when faced with transitory inflation pressures but should be prepared to move quickly if inflation expectations show signs of de-anchoring,” Gopinath added.During a press briefing on Tuesday, IMF officials said they had been observing how supply shortages were depressing manufacturing activity and hurting sectors such as the automobile industry.While the IMF expects inflation in the United States to remain high this year and normalize by next year, it is looking for signs that rising prices could “de-anchor” from the Fed’s 2% target. That will become clear, it said, if medium-term inflation expectations begin to rise and if higher prices become locked into wages and business contracts. Officials are also watching to see if the recent sharp increase in house prices continues to lead to higher rents, which would lift the inflation outlook.Mutations of the virus remain the most daunting challenge facing the global economy. The IMF projected that highly infectious variants, if they emerged, could derail the recovery and wipe out $4.5 trillion in gross domestic product by 2025.The brunt of that pain would most likely be felt in the poorest parts of the world, which have been hardest hit by the initial waves of the pandemic.“It was already diverging, and that has exacerbated in this period,” Gopinath said of global inequality. “It is a reflection of some very big fault lines that are growing.”

Tweets by @forbesindia
Why are India and the US sparring over a $110 million Mumbai mansion?
Reconstructive Urology