Every household in India has been paying more for groceries over the last year. In May, India's retail inflation rose sharply to 6.3 percent on a year-on-year basis and breached RBI's 4 percent threshold 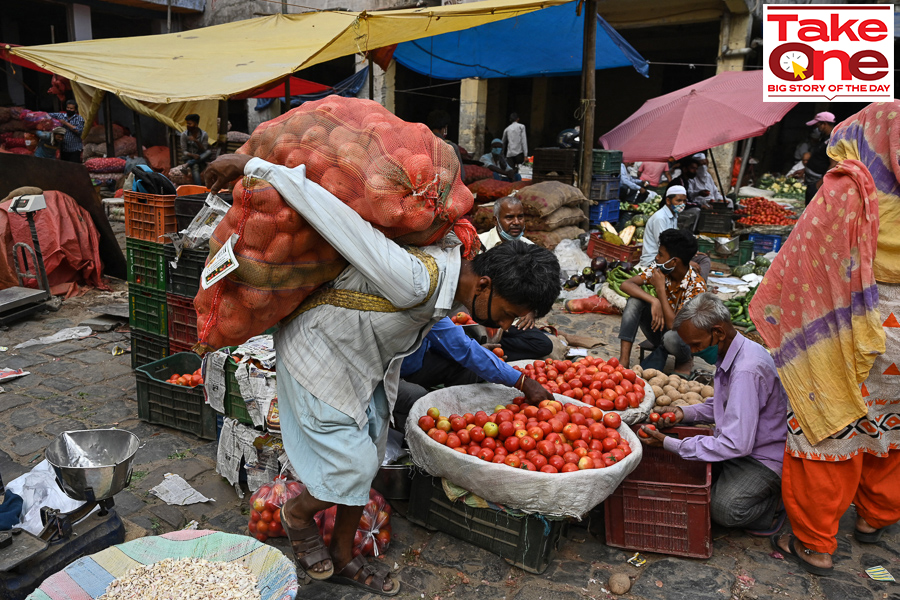 A labourer carries a sack of Beetroot at a wholesale vegetable market in New Delhi on May 17, 2021 amid a raging second wave of the Covid-19 pandemic.
Image: ​Arun Sankar / AFP

Karela (bitter gourd) rarely makes it to anyone’s vegetable list as a favourite, but if it did then you would have noticed that last year one paid Rs 40 per kg for bitter gourd in the eastern Indian city of Kolkata, while a year later it costs Rs 80 per kg in the retail market, a sharp rise of 100 percent.
It’s not just bitter gourd. Vegetables as basic as potatoes and onions have seen their prices go up by 50-60 percent over the last one year in Kolkata.
If you are someone who keeps a tab on expenses, then you would have noticed by now that prices of groceries, vegetables and poultry have only inched upwards since last year. For example, a packet of edible sunflower oil which was priced at about Rs 110 per litre now costs nearly Rs 186 per litre, an increase of 69 percent on a year-on-year basis. Blame it on imports or supply side pressures in terms of production and logistics issues, this has led to food inflation. Simply put, an increase in prices. (Please refer to the chart below for more items)
“We are moving to a higher inflation trajectory and it is best to learn to live with this,” says Abheek Barua, chief economist at HDFC Bank.

What this essentially means is that every household in India has been paying more for groceries over the last year. In May, India’s retail inflation measured by the Consumer Price Index (CPI) rose sharply to 6.3 percent on a year-on-year basis, breaching the RBI’s inflation target of 4 percent again (with an upper margin to go up to 6 percent) after a gap of five months. The central bank has kept its rate unchanged at a record low level of 4 percent and expects rural demand to remain strong owing to a good monsoon.
“India’s household balance sheet was impacted even before the pandemic. Core inflation has seen a continuous sequential uptick from mid of last year and now the CPI reading for the last month was very strong. If last year’s trend of rise in core prices excluding food and fuel continues, it will be a cause of concern for households,” says Sreejith Balasubramanian, economist at IDFC Asset Management. The consistent upward price movement indicates that high inflation is here to stay.
Real Private Final Consumption Expenditure (PFCE), which indicates household spending in the country and is a significant component of the gross domestic product (GDP), contracted by an annual 9.1 percent to Rs 75.6 lakh crore in FY21 down from Rs 83.2 lakh crore in FY20.
Other than a collapse in consumption, what hasn’t helped is that many people have lost their lifetime’s savings in fighting Covid-19. Still others have seen this and are preparing for the third wave by saving for it. Rahul Bajoria, chief India economist at Barclays Bank, says, “Given the high levels of uncertainty, precautionary savings are likely to increase as households cut down on non-essential spending.” He believes that a definitive end to the raging Covid-19 wave remains the only option to revive consumer confidence and household spending over the coming quarters.
Then there is the case of commodity prices going up, driving inflation as well. “Lockdown-led supply-chain disruptions will dissipate over the next two to three months while the uncertain and possibly more durable impact will be from high input price pressures and global commodity cycle-led impact. In such a scenario, when growth is still recovering from the first and second Covid-19 wave shocks, inflation will need to be tolerated for a few more months,” says Suvodeep Rakshit, senior economist at Kotak Institutional Equities.
According to Rakshit, the best bet is as gradually states open up, the focus should be on rapid vaccination, maintaining a vigil on inflation, plugging the gaps (especially in food items) wherever possible, and front-loading government expenditures.
Inflation has been on an upswing across the world. On June 16, the US Federal Reserve indicated it would fast forward its rate hikes. In May, the US reported inflation at 5 percent, a 13-year high. Balasubramanian points out that for now it seems to be more related to supply being unable to meet demand in the US. It is more in the prices of used cars, hotels, airfares, travel and hospitality and thus linked to the opening of the economy. “If there is no demand domestically (in India), can we export goods from India? It might be okay in the short term as, for example, the US has seen more fiscal support and is opening its economy, but it is unlikely to be a growth driver in the medium term,” adds Balasubramanian.
While people are looking to reduce their consumption, it will directly impact demand recovery. What hasn’t helped consumer sentiment is India’s economic growth recovery. The second wave, which affected all the states across urban and rural areas, has led to economists downward revising India’s growth targets too. Though one may argue that India’s GDP contracted by 7.3 percent for FY21, which is better than the central bank and the government forecasted 8 percent. During January- March 2021, GDP grew by 1.6 percent, mainly led by agriculture.

Barua says, “We expect the next year to have elevated inflation with low growth. Growth doesn’t look like it will fall below 8.5-9 percent even in the worst case scenario--as exports and public investments should pick up the slack."
We are walking on a thin rope towards stagflation, which cannot be completely ruled out. Stagflation is a situation where the economy is stagnating coupled with rising unemployment and high inflation.
According to data from Centre for Monitoring Indian Economy (CMIE), which releases employment data across the country, in May 2021, the unemployment rate in rural India stood at 10.63 percent and for urban India it stood at 14.73 percent during May 2021. It is the first time since June last year that unemployment rates have hit double-digit figures. Unemployment figures increased in April and May, reflective of the impact of the Covid-19 second wave which exacerbated joblessness across the country.
In a recent column for Forbes India on May 19, Mahesh Vyas, managing director and chief executive officer of CMIE, said that in 2020 the labour participation rate (LPR) slid to 35.6 percent in April before climbing back marginally in June, but it has not yet touched the 41.9 percent level seen last March. The LPR is the measure of the proportion of a country’s working-age population of 15 years of age or more that engages actively in the labour market, either by working or looking for work.
While unemployment levels had recovered to 6.5 percent in March 2021—from the high levels of 23.5 percent in April 2020—the LPR never repaired itself. Vyas wrote that a large portion of the people who were part of the labour force are no longer part of it—it’s a lasting impact of the pandemic.
According to Vyas, in October 2020, the average household income was ₹20,000, which was 20 percent lower than a year earlier, according to CMIE. This income will have dropped further. While the great Indian income divide is apparent, the important question is what the policy makers can do to battle this situation for the rural economy.
Indian development economist Jayati Ghosh puts out a five-point agenda that the policymakers can implement. She says some of the demands that economists, trade unions, social movements and those engaged with the poor have been making are to take immediate measures to enhance livelihoods by providing free 5 kg of foodgrains and 1 kg of pulses per month to every person who asks for it—not based on ration cards, but to everyone.
She adds, “We have more than enough food stock surpluses to cover this and provide delivery of food rations to households where children are deprived of anganwadi and mid-day meals at schools.”
Ghosh, who has been inducted by the United Nations to its United Nations High-level Advisory Board (HLAB) on Economic and Social Affairs, a high-level advisory board to advise the UN General on socio-economic challenges due to Covid-19, further says that the MGNREGA needs to be expanded to provide 150 days of work per year to every adult as against the present norm of every household. Third, the extension of employment guarantee to urban areas and payment of Rs 7500 per month to every household that is not paying income tax without relying on biometric information (state governments should be empowered to work out how to distribute), and finally doubling of the health budget and transfer of double the financial resources to state governments for health, to enable them to deal with the pandemic and its fallout and impact on other health services.
Ghosh adds, “These are not unusual measures–almost all other countries, both developed and developing, are doing some versions of this. India is an outlier in terms of how stingy the government has been.”
There has been a strong call for cash transfers too. Globally, if one notices, a fiscal stimulus, especially in the form of payouts and employment assurances, has created liquidity in the ecosystem. Major economies like the United States and Canada have employed these policies with the US providing a fiscal stimulus of 25 percent of its GDP.
“The pandemic has significantly hit the informal and rural sections of our society. Direct cash transfers, already in vogue in many states, could provide the much needed protective shield to low-income households to wither the pandemic,” says Bajoria.
Ghosh adds that cash transfers during this emergency have to be seen as part of a package, not the whole solution. On the other hand, Rakshit believes a lot of the transfers, unless in sufficiently large quantum, could go towards filling the lost incomes and debt incurred (and possibly fall short in covering these too). Most of the consumption (at least in value terms) is driven by the top of the pyramid. He says, “Over the next three to four months the focus should be on front-loading as much of expenditure as possible including higher expenditures on MGNREGA and rural public works. This would provide a safe stream of income over a period of time as well as create capacity.”
The only way to create jobs is when the private sector invests in capex and thus government needs to create that infrastructure backbone so that the private sector can come in, says Balasubramanian. “We expect in the next two-three months things will start picking up. The growth driver that will lead everything is consumption.”
(With additional inputs from Samar Srivastava)