If inflation proves to be sticky, rising costs of capital for the government, companies and individuals could also restrict infrastructure spending and slow down private sector capex cycle

As India emerges from the Covid-19 pandemic, rising inflation expectations have resulted in a slow uptick in borrowing costs for the government and companies alike. While these are still early days, the next year will be crucial in determining how India’s inflation trajectory progresses. Policy makers are clear they would like to avoid a repeat of a 2011-13 situation when high inflation and low growth derailed the India growth story. As the pandemic progressed, the government had been careful in its fiscal support for the economy. Much of the Rs 20 lakh crore stimulus package it announced in May 2020 was in the form of food support and credit guarantees. The result was a manageable 9.5 percent fiscal deficit for the year ending March 2021 that included central, state and government enterprises borrowing. “To be fair, the central bank managed that borrowing with no disruption in the bond market,” says Ananth Narayan, associate professor of finance, SP Jain Institute of Management and Research.

While 2020 went by without any major disruptions, it was the additional borrowing requirements announced in the Union Budget that caught the market by surprise. It included an additional Rs 80,000 crore in borrowing for February and March. This sent the 10 year Government of India bond from 6 percent to 6.2 percent, raising the cost of capital. In two bond auctions post the Budget, the RBI had to intervene to keep bond yields from moving even higher. The government also pushed back the fiscal glide path and indicated that it would bring down the fiscal deficit from a projected 6.8 percent in FY22 to 4.5 percent in FY26. The expectation had been for 3 percent.

India’s fiscal loosening comes at a tricky time when world over, governments are having to contend with higher inflation expectations on account of economies opening up. In the US, the 10-year bond rose from 1.3 percent to 1.55 percent, unnerving investors. This also sent global stock markets tumbling as the rising cost of capital made equities less attractive. India’s benchmark Sensex index fell 1939 points (3.8 percent) on February 26. 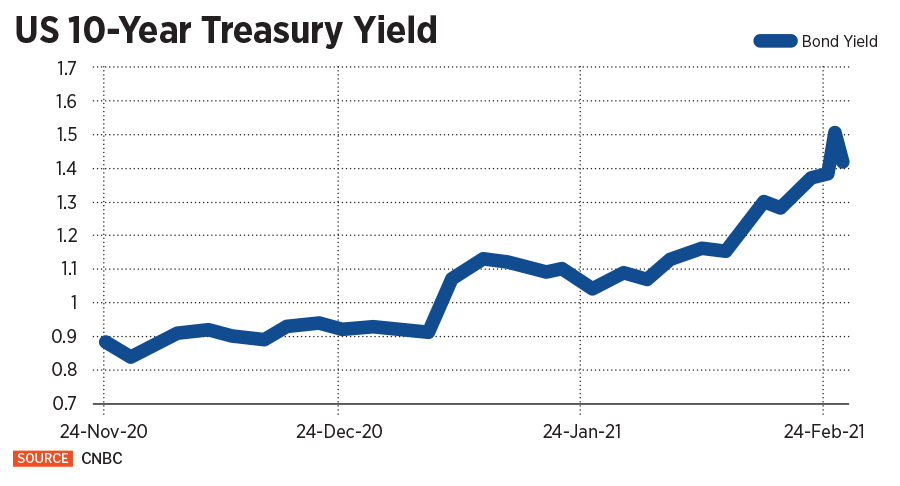 The situation is no different in India. The country is looking at a normalisation of consumption, GST collections have been heading north and core inflation remains high. Global commodity, energy and food prices have also started to move up and short-term supply chain disruptions as in the case of chips can lead to price increases.  India edged back into positive growth in the latest three months to December 2020 quarter, with a 0.4 percent rise in the pace of growth, though it is still lower than the 3.3 percent seen a year earlier. Growth for the full fiscal is pegged by the IMF at 8 percent. Indian policymakers also have to contend with an economy where the terms of trade have moved to the rural economy. They have money to spend and the spike in prices of protein, as happened 2009 onward, can prove long lasting. Lastly, communication and power prices should move up in 2021. Once inflation seeps into the system, arresting it can prove to be challenging. The last episode saw inflation rise in 2007 and a loosening of money supply in the aftermath of the Lehman crisis. Bank credit continued to expand at 20 percent. This was also the time when projects were stuck and money couldn’t be put to productive use. The end result was too much money chasing too few goods and services (and bad debts rising in the banking system). This coupled with high imports also led to pressure on the rupee. Narayan believes policy makers have learned lessons from that episode and will avoid a repeat. He points to the impetus on domestic manufacturing through the production linked incentive (PLI) schemes.  As things stand, RBI’s inflation targeting band is up for review in March. As of now, the central bank is mandated to keep inflation within a 2 percent band of 4 percent. Once reviewed, the band could be reset. “If the band moves to say 5 percent then the bond market would demand a higher yield,” says R Sivakumar, head of fixed income at Axis Mutual Fund. Already, yields on 15-year government securities have moved to 6.7 percent and that is more reflective of the current market. For corporate and state government debt yields are upwards of seven percent.  Lastly, two additional factors could point to yields moving north. First, corporate credit, which had been comatose for the last six years, could start seeing fresh demand as companies look to restart capital spending. Corporate credit has grown at 6-7 percent compared to 20-22 percent in the early part of the decade.  Second is the normalisation of liquidity. Overnight rates at 3 percent could rise as the monetary policy committee (MPC) signaled that 4 percent rates are accommodative. “[According to the MPC], a rising interest rate environment is consistent with monetary policy being accommodative,” says Sivakumar. For now, policy makers will be keeping a close watch on inflation. If it proves to be sticky, the rising cost of capital for the government, companies and individuals could slow down an economic recovery, restrict spending on infrastructure and slow down the private sector capex cycle.