Heidelberg, a city of 160,000 people on the Neckar River, which was threatening to overflow its banks recently after unusually heavy rains, provides a glimpse of how an automobile-light city of the future may look 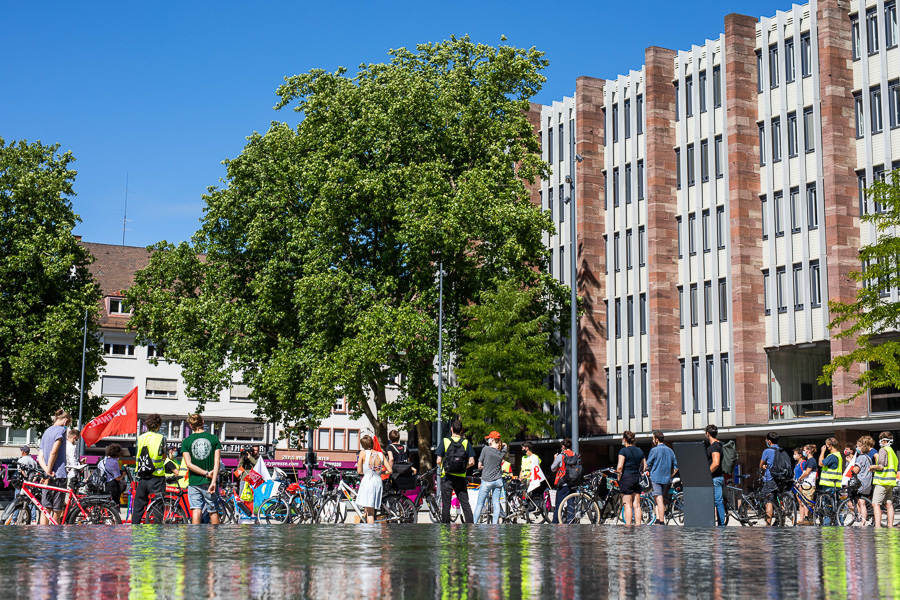 A bicycle demonstration on the square of the Old Synagogue of the University, HeidelbergPhoto: Photo by Philipp von Ditfurth/picture alliance via Getty Images

Eckart Würzner, a mayor on a mission to make his city emission-free, is not terribly impressed by promises from General Motors, Ford and other big automakers to swear off fossil fuels. Not that Würzner, the mayor of Heidelberg, is against electric cars. The postcard-perfect city, in southern Germany, gives residents who buy a battery-powered vehicle a bonus of up to 1,000 euros, or $1,200. They get another 1,000 euros if they install a charging station. But electric cars are low on the list of tools that Würzner is using to try to cut Heidelberg’s impact on the climate, an effort that has given the city, home to Germany’s oldest university and an 800-year-old castle ruin, a reputation as a pioneer in environmentally conscious urban planning. Würzner’s goal is to reduce dependence on cars, no matter where they get their juice. Heidelberg is buying a fleet of hydrogen-powered buses, building a network of bicycle “superhighways” to the suburbs and designing neighborhoods to discourage all vehicles and encourage walking. Residents who give up their cars get to ride public transportation free for a year. “If you need a car, use car-sharing,” Würzner said in an interview at Heidelberg’s Baroque-style City Hall, which was nearly deserted because of the pandemic. “If you can’t use car-sharing because you’re living too far outside and there is no mass transportation, then use the car, but just to the train station and not to downtown.” Heidelberg is at the forefront of a movement that is probably strongest in Europe but has a presence in plenty of communities around the world, including U.S. cities like Austin, Texas, and Portland, Oregon. The pandemic has given many citizens a taste of what densely packed urban areas would be like without so much traffic, and they like it. Vows of fossil fuel abstinence by carmakers recently, including GM, Ford Motor and Jaguar Land Rover, are a tacit admission that they will no longer be welcome in cities at all unless they radically clean up their acts. Even then, the tide of history may be against them as urban planners try to free up space now occupied by vehicles. Dozens of cities in Europe, including Rome, London and Paris, plan to limit center city traffic to emission-free vehicles during the next decade. Some, like Stockholm and Stuttgart, the German home of Mercedes-Benz, already ban older diesel vehicles. National governments are adding to the pressure. Ireland, the Netherlands, Sweden and Slovenia say they will ban sales of internal combustion cars after 2030. Britain and Denmark say they will do so in 2035, allowing only hybrids after 2030, and Spain and France in 2040. Such declarations of intent “certainly push vehicle manufacturers,” said Sandra Wappelhorst, a senior researcher at the International Council on Clean Transportation in Berlin who tracks plans by companies and governments to phase out internal combustion. Heidelberg, a city of 160,000 people on the Neckar River, which was threatening to overflow its banks recently after unusually heavy rains, provides a glimpse of how an automobile-light city of the future may look. Heidelberg is one of only six cities in Europe considered “innovators” by C40 Cities, an organization that promotes climate-friendly urban policies and whose chair is Michael Bloomberg, the former mayor of New York. (The others are Oslo, Norway; Copenhagen, Denmark; Venice, Italy; and Amsterdam and Rotterdam in the Netherlands.) Among the city’s measures to make cars irrelevant are building bridges that would allow cyclists to bypass congested areas or cross the Neckar without having to compete for road space with motor vehicles.
Buildings are also important. The city has cut energy consumption of schools and other city buildings by 50% in the last decade — no small feat when many of the structures are hundreds of years old. Battery-powered vehicles do not pollute the air, but they take up just as much space as gasoline models. Würzner complains that Heidelberg still suffers rush-hour traffic jams, even though only about 20% of residents get around by car. The rest walk, bicycle or take the electric buses that ply the narrow, cobbled streets of the city’s old quarter. “Commuters are the main problem we haven’t solved yet,” Würzner said. Traffic was heavy on a recent weekday, pandemic notwithstanding. Electric cars are also expensive. At current prices, they are out of the reach of lower-income residents. Political leaders need to offer affordable alternatives like public transportation or bicycle routes, Wappelhorst of the Council on Clean Transportation said. “It’s not only about cars in the end,” she said. “You need the whole package.”

Heidelberg’s mile-long pedestrian zone, usually thronged with tourists but nearly empty recently because of the pandemic, is said to be Germany’s longest. But the best showcase for the city’s emission-free ambitions is built atop a former rail freight yard on the edge of town. In 2009 work began on the Bahnstadt, or Rail City. The vacant parcel, which had to be cleared of three unexploded bombs from World War II, offered planners a blank slate with which to create a climate-neutral neighborhood. The modern apartment buildings, architecturally the opposite of Heidelberg’s Baroque city center, are so well insulated that they require almost no energy to heat. What warmth they do require comes from a plant just outside the neighborhood that burns waste wood. Cars are not banned from the Bahnstadt, but there is almost no traffic. Most streets are dead ends. Apartment buildings are arranged around generous courtyards with playgrounds and connected by walkways. The one street that cuts through the triangular neighborhood has a speed limit of 30 kilometers an hour, or less than 20 mph. Bicycles have the right of way. The Bahnstadt, with 5,600 residents and still growing, has its own kindergarten and elementary school, a community center, two supermarkets, several bakeries and cafes, two bicycle shops and six car-sharing stations, each with two electric vehicles. Heidelberg’s main train station and a tram stop are a short walk away, and a bicycle path follows the route of an old rail line to the city center. There are also jobs. The Bahnstadt has several large office buildings whose tenants include the German subsidiary of Reckitt Benckiser, the maker of consumer products like Clearasil and Woolite. “The idea is to get back to the classic early city, where living and working are closely intertwined,” said Ralf Bermich, head of Heidelberg’s Office for Environmental Protection. Dieter Bartmann, who in 2012 was one of the first people to move into the Bahnstadt, owns a car but figures he drove it about 20 kilometers, or 12 miles, in January, mostly to the supermarket to stock up on staples that were too bulky to carry on his bicycle. Bartmann, a former manager at SAP, the software company whose headquarters are in nearby Walldorf, was sitting on a bench along a promenade that borders one side of the Bahnstadt. The area is blocked to motorized traffic and looks out on farmland. Runners, cyclists and people on inline skates glided by. It looked idyllic on a sunny winter day, but Bartmann, former chair of the Bahnstadt residents’ association, said there were still things that could be improved. He would like to do more to keep cars out — for example, by blocking off the one through street. Some buildings have underground garages, but these were not built with electric cars in mind and do not accommodate charging points easily. The paved promenade is not wide enough, Bartmann said, leading to conflicts between cyclists and pedestrians. But, he added, “this is high-level complaining. You have to be realistic.” Würzner, the mayor, said his goal was to make Heidelberg climate neutral by 2030, an ambitious target. The city plans to generate its own wind and solar power and is installing a hydrogen filling station for a fleet of 42 buses powered by hydrogen fuel cells. The city wanted to order hundreds of the buses, but Würzner complained that the bus-makers had been slow to respond to demand for emission-free transportation. “We can’t get enough,” he said. (Daimler, which makes buses in Neu-Ulm, about 2 1/2 hours from Heidelberg, does not yet sell a city bus powered solely by hydrogen.) Würzner, who drives an experimental hydrogen-powered Mercedes, acknowledged that not every city could afford to do all the things that had made Heidelberg a showcase for environmentally friendly planning. The University of Heidelberg, one of Germany’s most prestigious universities, has spawned numerous research institutes that provide a solid tax base. The residents tend to be well educated and affluent. “It’s true the city is in a quite good financial situation,” Würzner said. But he said he often heard from mayors in Europe, the United States and Asia who wanted to emulate Heidelberg’s strategy. “We all know we have to go in this direction,” he said. “It’s just a question of how fast.”