Despite a bright business outlook, FMCG companies are expected to underperform the market 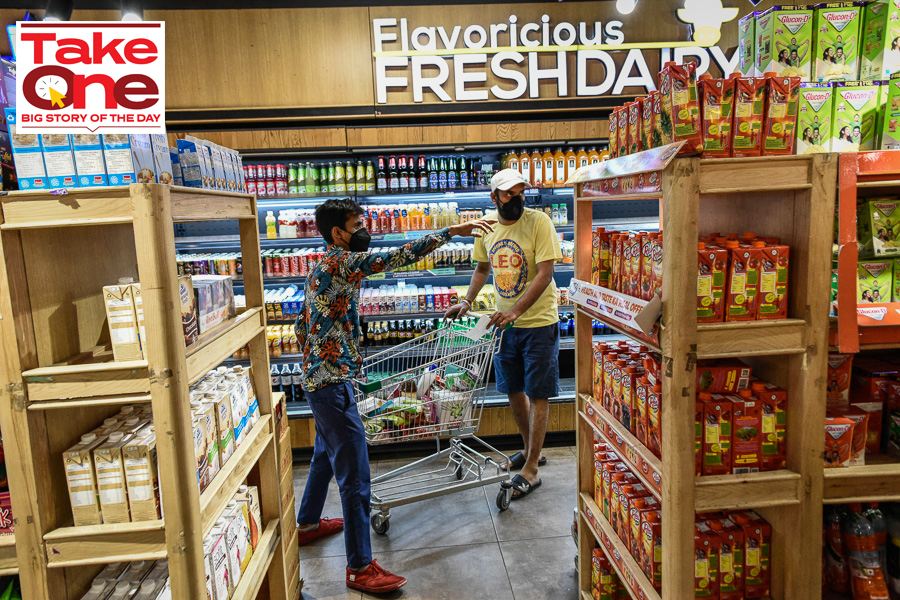 Indian consumer staples companies saw business boom during the Covid-19 pandemic. As consumers stayed home, they ate more biscuits, used more dishwashing gel and soap, and applied more disinfectants. The net result was volume and revenue growth that surprised even the most optimistic of earnings estimates made before the pandemic. This time, however, these companies are expected to underperform the market.

After three quarters of sustained performance, the numbers can no longer be dismissed as a flash in the pan. The first quarter of this fiscal or the ‘lockdown quarter’ saw pantry-loading by consumers. Volume growth, although different for different companies, was generally in high single digits, while margins rose on account of a decline in advertising expenses. Some categories like skin care products underperformed. The second quarter saw brisk sales that the market put down to pent up demand and strong sales in rural India, while the third quarter saw a continuation of rural sales and an increase in discretionary categories. Analysts have priced in a strong fourth quarter on account of a low base effect.  As a result, companies are on track to report revenue and profit growth in the mid-teens in fiscal 2021. In its recent earnings conference call, the management at Hindustan Unilever (HUL) pointed out that the worst of the Covid-19 disruptions were behind them. This comes after nearly five years of high single-digit growth on account of low volume growth and a decline in inflation, which meant that companies could not revise prices upwards. HUL, Dabur and Marico saw revenue growth of 4, 2 and 5 percent respectively in the last five years. “If you had gone back to the same time last year and forecast, people [in the industry] would have said this level of growth is difficult,” says Rahul Arora, CEO at Nirmal Bang, who has tracked the industry for over a decade. He believes the sector has several tailwinds for 2021, before the base effect comes back to bite it.  The most heartening has been the rise in demand from rural India. These regions constitute the next set of consumers, and while low unit packs have lower margins, they help drive volume growth and bring in consumers from regional brands. Sales in rural India that were growing as fast as urban sales have now started growing at 1.5 times. This has prompted questions on whether the industry could be headed for a repeat of 2011-13, when sales and profitability grew by over 20 percent a year. This time an uptick in consumer price inflation should also augur well. Sales growth is the sum of volume and price growth; the latter has been absent for the last five years.  According to Arora, all eyes should be on the initial monsoon forecasts for this year. A good monsoon would mean the third consecutive year of strong rains, which, coupled with the money that has been pumped into the rural economy, should do well for the sector. Rising raw material prices are an area of concern. 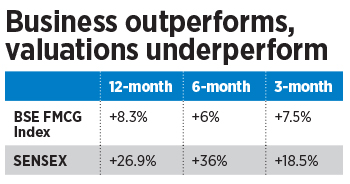 In addition to healthy demand, the pandemic also allowed consumer companies to optimise their cost base. Take distribution, for instance. Companies have now begun to experiment with removing one layer of the distribution network, and are servicing local kirana shops directly; some are getting kiranas to order directly from them. An increasing share of internet-based sales could again reduce distribution costs. If it works, it could shave off 3 to 4 percent from their costs, and add 1 to 2 percent to the bottomline over the next two or three years. A portion of travel costs may also never return.  Despite the growth in sales and profits, the BSE FMCG Index has underperformed the market over a 3-, 6- and 12-month period. The only trade they participated in was the ‘unlock trade’ in June 2020, when the initial relaxations in the lockdown brought consumer and pharma stocks into focus. “This underperformance is not structural. At a price, everything has a buyer,” says Amit Khurana, head of equities at Dolat Capital. (See ‘Business outperforms, valuations underperform’) One reason for this has been the multiples these businesses quote at. Since 2014 when sales growth slowed, consumer stocks continued their upward march taking their multiples higher. In 2013 HUL quoted at 32 times earnings; it now quotes at 65 times. The company’s profits rose 13 percent a year over the last five years (mainly on account of margins expanding), while its stock rose 22 percent a year. Now, investors expect cyclicals and capital goods companies to outperform, and are shifting money there. A slow revival in growth could see FMCG become a sought after sector again.

Tweets by @forbesindia
Photo of the Day: Wildlife back to business
Normalising the conversation around periods is an essential in today's day and age