India's economy is picking up speed, with revival in demand and business activity aiding the ongoing recovery 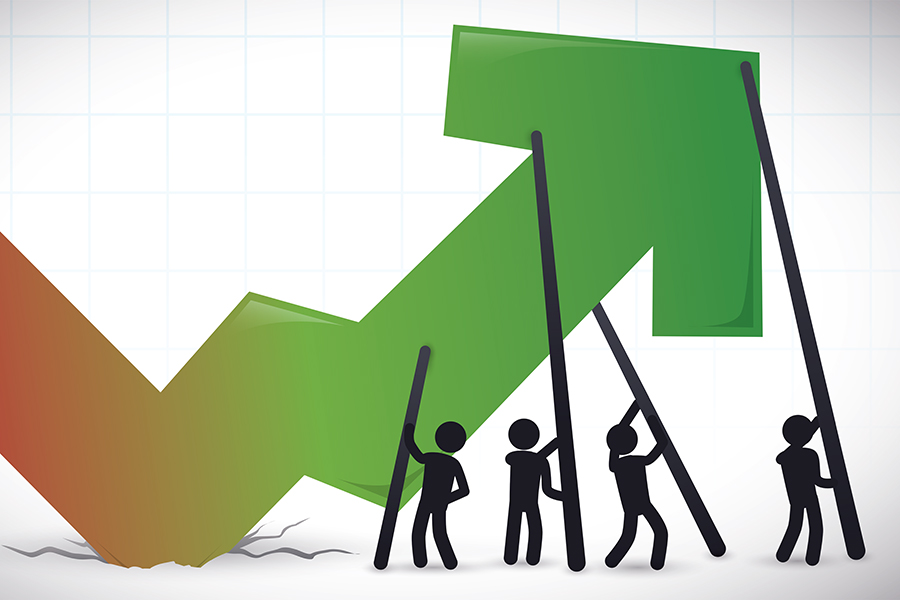 Image: Shutterstock A raft of encouraging economic indicators suggest that the proverbial animal spirits are back. Are they? Forbes India presents two views. Read another view by HDFC Bank's Abheek Barua, here Britannia Industries reported a 23.23 percent surge in consolidated net profit for the September 2020 quarter. Colgate saw a 26.6 percent rise in earnings before interest, taxes, depreciation, and amortisation (EBITDA),with a 540 basis point jump in margins to 31.8 percent. Cement major ACC saw EBITDA rise by 20.47 percent to Rs671 crore in the September quarter, with EBITDA margin up 328 basis points at 19 percent. Another cement behemoth, Ultratech, reported a 113 percent surge in consolidated profit, a 30 percent rise in EBITDA and a 480 basis point rise in margins, to 26.6 percent. Overcoming challenges posed by the Covid-19 pandemic and lockdown, ICICI Bank posted a 549 percent increase in net profit at Rs4,251 crore for the September quarter, with credit card spends at 85 percent of pre-Covid levels. India's largest private sector bank, HDFC Bank, saw an 18.4 percent rise in profit, driven by a solid 15.8 percent surge in the retail loan book. What these numbers from cement, fast moving consumer goods (FMCG) and banking indicate is that economic momentum in the last three months is gaining rapid traction. Net profit, which had declined by 74.7 percent in the June quarter, recorded a multi-fold increase in September 2020 quarter, at 263 percent sequentially, for a universe of 1,897 listed companies. While topline fell by 5.7 percent in the September quarter, it was much lower compared to the 27.3 percent fall in June quarter. India's Covid-19 recovery rate is the highest globally, at over 93 percent, and India's case fatality rate at barely 1.47 percent is among the lowest in the world. And this, despite the fact that India's population density per square kilometre is over 455 persons, among the highest globally. While the agrarian economy has been doing the heavy lifting, even otherwise, India’s economy picked up speed in September 2020, with the Index of Industrial Production (IIP) growing by 0.2 percent, with a reading of 123.2, reversing six months of decline. Electricity, mining, consumer durables and non-durables jumped by 4.9 percent, 1.4 percent, 2.8 percent and 4.1 percent respectively. It is unfair to say the good performance was only due to a favourable base effect, pent-up demand and inventory build-up, prior to festive season, if the record online sales of Rs72,000 crore this year during Diwali are anything to go by. As a revival in demand and business activity aids the ongoing recovery, are the proverbial ‘animal spirits’ back? Indeed, they are. For instance, foreign portfolio investors (FPIs) invested over Rs32,777 crore into Indian markets by mid November 2020, while the number was Rs21,826 crore in October. The last high in terms of FPI inflows was in March 2019, at Rs36,927 crore. Foreign direct investment (FDI) between April and August this year stood at $35.73 billion, a 13 percent increase year on year. This vindicates the faith of overseas investors in Prime Minister Narendra Modi's farm sector and labour market reforms despite the coronavirus pandemic that has crushed business sentiment worldwide. India's forex reserves at $572.771 billion are at record highs.  There is a genuine rise in aggregate demand. For example, automaker Maruti Suzuki reported an 18.9 percent growth in total sales, including exports, in October 2020, at 1.82 lakh units. Of this, 1.66 lakh units were sold domestically. In fact, in just the nine days of Navratri festivities, the company sold 95,000 vehicles this year, compared to barely 65,000 units in the same period last year. Hyundai's Creta and i20 models have a waiting period of between two and four months. Overall, passenger vehicle sales, a key indicator of economic momentum, rose 26.5 percent in September and 17 percent in October 2020, from a year ago.  Also, in October 2020, domestic tractor sales crossed the one-lakh mark for the second month in a row, to reach 115,155 units, as against 106,889 units in October 2019 and 108,585 units in September 2020. The previous high was achieved in October 2018, at 112,556 units. Animal spirits are buoyed by the rural economy, which continues to benefit from sustained tailwinds in the form of good rainfall (third highest in past 25 years and 9 percent higher than long-term average) and a record kharif output, which is slated to result in a 13 percent rise in farm incomes.

Activity in India’s dominant services sector continued to recover, with the main index rising to 49.8 in September, from 41.8 in August. That’s a marked improvement from April’s record low of 5.4. The manufacturing purchasing managers’ index (PMI) rose to 56.8 in September and 58.9 in October—the highest reading since mid-2008! However, there are some areas that still need to see sustained strength. For example, exports returned to positive territory with shipments rising 6 percent in September year-on-year. But, in October, India's exports fell 5.12 percent to $24.89 billion. World merchandise trade is set to plummet between 13 percent and 32 percent in 2020 due to the Covid-19 pandemic, as per the World Trade Organization (WTO), weighed down by trade tensions and slowing global growth. The Centre’s recently launched production-linked incentive (PLI) scheme, worth Rs1.46 lakh crore, will attract internationally reputed investors to create capacities with global scale and competitiveness. This will make India an export hub in the future. In the mobile phone segment alone, it is expected that production worth over Rs10 lakh crore will take place over next five years, of which 60 percent will be exports. Barring a few soft patches, animal spirits are clearly back, with recovery likely to be a full blown one in coming months. This is best amplified by GST collections of Rs1.05 lakh crore in October 2020, up 10 percent year-on-year. Also, over 2.4 million invoice reference numbers or e-invoices are being generated daily now, compared to 800,000 in early October. Freight volume grew 18 percent year-on-year at 43.46 million tonnes as of October 13, while earnings jumped 11 percent, with cement and coal comprising over 50 percent of the entire freight loaded. India's power consumption grew 11.45 percent to 55.37 billion units in the first half of October this year, mainly driven by buoyancy in industrial and commercial activities, yet again showcasing strong green shoots. The BHIM Unified Payments Interface (UPI) surged by a solid 80 percent from 1.14 billion transactions in October 2019 to 2.07 billion transactions in October 2020, with transaction value rising by 101 percent, from Rs1.91 lakh crore to Rs3.86 lakh crore. Animal spirits are back because the government has used the pandemic to infuse a fiscal stimulus of Rs29.88 lakh crore, akin to 15 percent of India's GDP, rather than recoiling on the backfoot. “Aatmanirbhar Bharat is not just about competition but also about competence, it’s not about dominance but about dependability, it’s not about looking within, but about looking out for the world. A self-reliant India is also a reliable friend for the world,” this powerful quote by PM Modi sums up the ethos of animal spirits, reforms, inclusivity and India's global outreach. Read another view by HDFC Bank's Abheek Barua here (The author is an economist, national spokesperson for the Bharatiya Janata Party and bestselling author of Truth and Dare—The Modi Dynamic) ​

Tweets by @forbes_india
How Britain is reacting to 'The Crown,' season 4
The Economic Revival Debate, Part 2: Battle Won, War Still On