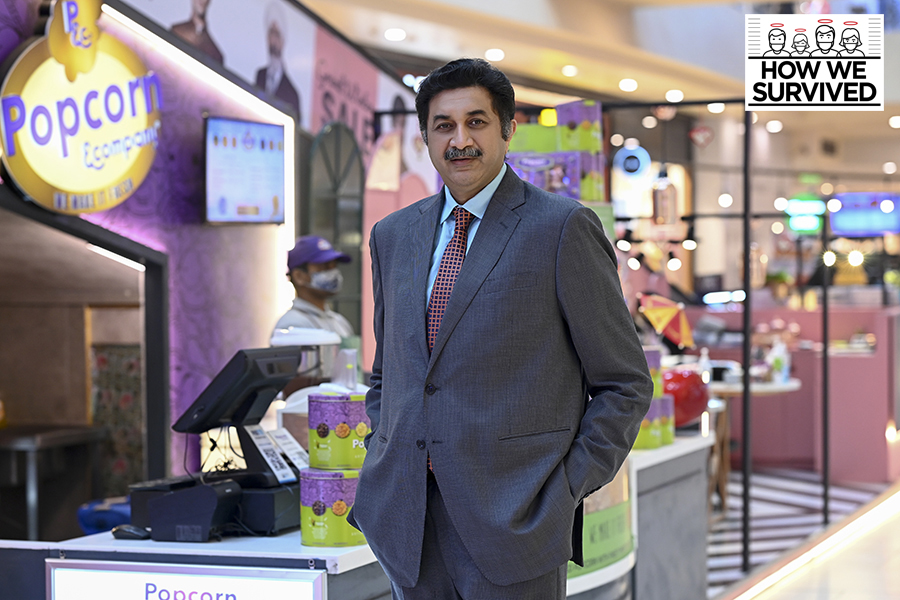 Vikas Suri has been in the business of heat for over two decades. In 2003, he started Kitchnrama, a venture to supply popcorn kernels, seasonings, oils and kitchen equipment to hospitality majors, cinema owners and institutional players. For Suri, who spent over a decade with a bunch of food and beverage (F&B) brands in India and the US before turning entrepreneur, FY20 was the best year for his B2B business: Rs2.76 crore in sales. “The B2B business was just heating up,” he says.    The revenue might look ridiculously low to be touted as ‘best’. Suri, though, doesn’t complain for two reasons. First, popcorn kitchen equipment is a cottage industry, with exceedingly low-entry barrier, and margins. Secondly, Popcorn & Company—his three-year-old gourmet popcorn brand which became bigger than Kitchnrama in FY19—had slipped from Rs2.19 crore to Rs1.27 crore in FY20. The business of equipment, Suri recalls, was best-placed to make most of the growing love for popcorns. With a combined revenue of over Rs4 crore from Kitchnrama and Popcorn & Company, Suri was quite puffed up about the prospects of a promising new fiscal.

Then came the pandemic. Theatres shut down; offices, malls and retail outlets closed; restaurants went out of business; and the food and beverage industry got battered. “I have never faced such heat in my life,” recalls Suri. For the seasoned F&B entrepreneur, the pandemic was almost a body blow. The B2B business came to a halt, and the future of B2C venture—Popcorn & Company—also looked uncertain. “I thought the pop had gone out of my life,” he says.   Nine months later, in December 2020, Suri’s business was sizzling. Thanks to Popcorn & Company. While Kitchnrama was still struggling to open its account, Popcorn & Company posted a revenue of over Rs2.25 crore. The staggering numbers churned in three quarters—April to December—were more than the sales of two fiscal years—FY18 and FY19—combined. Suri decodes the magic: Popcorn & Company went direct to the consumers who had found nirvana in a new form of entertainment: OTT binging on Netflix and Amazon. 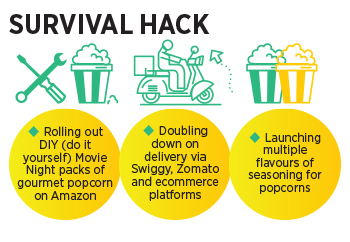 Back in April last year, Suri rolled out ‘Movie Night: DIY (do it yourself) Popcorn Kit’ on Amazon for a little under Rs500. The move was not easy for two reasons. First, Popcorn & Company had never been on ecommerce platforms. Second, Suri has shied away from entering into mass production of handcrafted gourmet popcorn. “The crackling sensation of popcorn was our secret recipe,” he says.  The pandemic, and lockdown, made Suri revisit his business strategy. The question was of survival, and two silver linings were clearly visible. Cinema had moved inside the homes of consumers, who were getting addicted to OTT binging. Lockdown, Suri thought, might force consumers to try gourmet popcorns and upgrade from the cheaper white counterparts. Popcorn & Company made its debut on Amazon with multi-flavoured DIY packs. The result was a blockbuster. “I never realised the potential of ecommerce, and the power of innovative seasonings,” he says. Four seasonings—garlic cheddar cheese, papdi chaat, spicy peri peri and hot and sweet ketchup—turned out to be bestsellers.  For Suri, the pandemic lesson is clear. “One must not put all eggs in one basket,” he says. For Popcorn & Company, relying solely on offline retail was a recipe for disaster. There is another lesson. Consumers don’t mind paying for a premium product—even if that means gourmet popcorns—if they see value in it. The perception of ubiquitous popcorn being a cheap product where money can’t be made is erroneous. Had people been content with cinema and other forms of entertainment, Suri reasons now, they would not have paid for Netflix or Amazon Prime. “Underestimating the sensibilities of consumers never pays,” he says.   The story of gourmet popcorn, reckon marketing experts, is quite similar to other products that start plain vanilla and then graduate to a premium avatar. Take, for instance, soap. “There is Lux, and there is Dove,” says Ashita Aggarwal, marketing professor at SP Jain Institute of Management and Research. Dove, she explains, not only targets a new set of users but also offers compelling reasons for the existing soap users to upgrade. Popcorns too will have multiple avatars. “The unorganised industry is the biggest reason and advantage for gourmet popcorns,” she points out, adding that the entry barriers are high and the segment won’t be crowded. Popcorn & Company, she underlines, must use the sales tailwind to reach out to a wider set of consumers.   Suri, for his part, wants to remove the tag of ‘niche’ from gourmet popcorns. “I am planning to roll out booths across malls and retail chains to make people familiar with gourmet popcorn,” he says. The focus on ecommerce, though, remains intact. “Netflix binging and gourmet popcorn munching is the new normal,” he smiles.

Tweets by @forbesindia
China appears to warn India: Push too hard and the lights could go out
Rising inflation could stand in the way of India's economic recovery