As a zero-debt company, aided by its resilient business model and a spunky bounce back plan, Mahindra Holidays & Resorts wrote its comeback after Covid-19 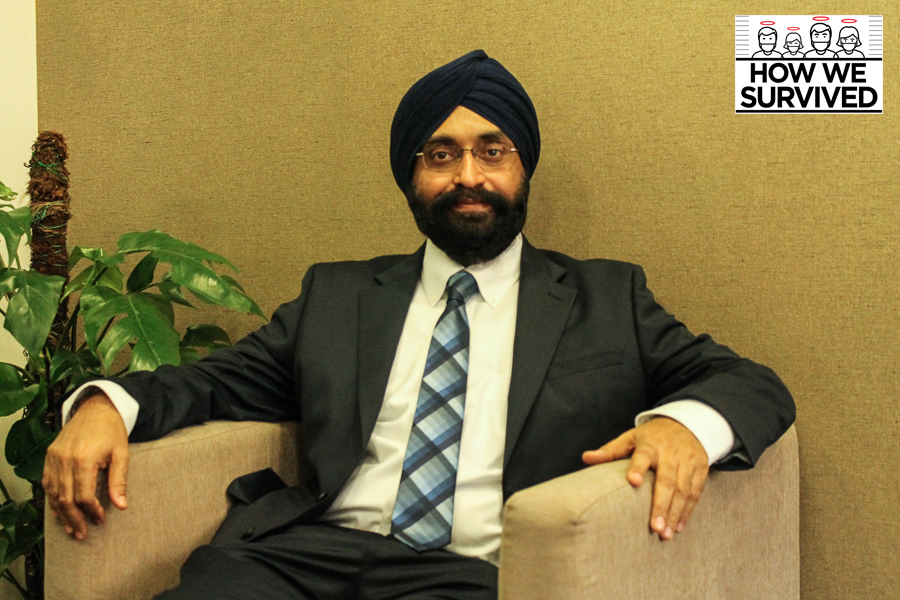 For Kavinder Singh, the first quarter of every fiscal—especially March—has always started with a bang. Look at the members that Mahindra Holidays & Resorts India, which has Club Mahindra as its flagship brand, has added over the last few first quarters: 4,371 in FY20 and 4,577 in FY19. Singh, managing director and chief executive officer of listed entity Mahindra Holidays & Resorts India, hoped for a similar big-bang performance during the same period last fiscal. “March,” he explains, “is big for us.” The month is special because of three reasons: Resort occupancy reaches its peak; most schools are shut for annual holidays; and the sales team goes on an adrenaline overdrive to get new members.

Last March, though, was different. In fact, it was alarming. In the second week, the World Health Organization declared Covid as a ‘pandemic’. The writing on the wall was clear: India too would get hit. By mid-March, the occupancy at Mahindra Holidays & Resorts was already at 80 percent, and the company gradually started shutting down over 60 resorts it has across the country. Safety advisories were issued to the staff; temperature checks and sanitisation measures were put in place well ahead of the lockdown, and eventually everything came to a grinding halt after the official lockdown. During the first week of April, Singh was staring at the big question of how to survive. 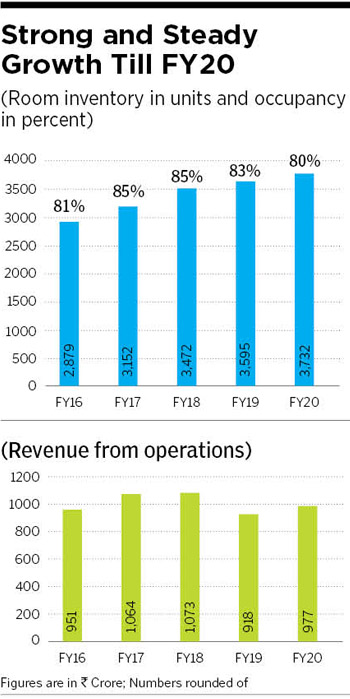 Survival of the organisation, though, was a no-brainer. The company had enough oxygen—it has been debt free and has enough liquidity on the books. Singh knew the company wouldn’t be gasping for breath. The twin challenge for him, on the operational and people’s front, was how to ensure the safety of employees and customers whenever they would be back to the resort; and how to continue with the business in a safe manner. Here lied the problem. The sales team, which makes good money by achieving their target of adding new members in the month, was not able to go out and sell membership. The big question, and dilemma, was ‘how to sell’. The answer was quickly provided by one of the sales team members. “He was not even a coder,” recalls Singh. The solution, he alludes, was nothing short of fantastic: Selling membership virtually. While the world resorted to WhatsApp, Zoom and Microsoft to stay alive and kicking, Singh’s team quickly created a video-selling tool using an open-source software. It worked. In the first quarter of FY21 (April-June), the sales team managed to add 1,270 members. No mean feat given the context: Resort occupancy percent was zero, and income from resorts was a paltry Rs 2 crore. Things improved in the next quarter—July-September. Occupancy was at 30 percent, income from resorts increased to Rs 7 crore, and the new membership count doubled: 2,681. “We created a 5C framework to survive the pandemic,” says Singh. Drawing on the traits of service, quality, warmth and attentiveness, Singh drafted the 5Cs and discussed with his team in a virtual town hall in April. “We are in this crisis together,” he assured his team, “and we would come out victorious.” 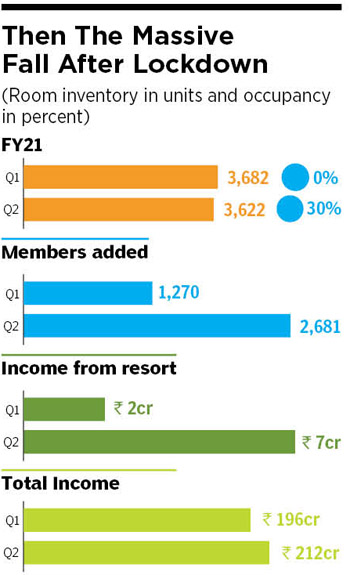 Call it the power of symbolism, the fightback had to start with C. “Corona starts with C. And we came up with our answer with five Cs,” he says, explaining his new playbook. The first C, he points out, stood for compassion, and it started with team members. Understanding the limitations of each member and working out a solution was made a priority. The second element was being ‘creatively restless’. A digital campaign was rolled out—21 days of family moments—for the members. The idea, Singh informs, was to engage with them in a creative manner. From coffee painting and makeup workshops to rolling out a three-year membership product—GoZest—the company pulled out some creative hacks to engage with its consumers. The third and the fourth elements were staying ‘connected’ and ‘conserving’ cash. Staying connected meant doing the regular business in not-so-regular way. The company rolled out ‘Travel with Confidence’ campaign, a door-to-door solutions, to allay the concerns of the travellers. From discounted Covid tests and certification to offering Covid travel insurance for stress-free holidays, discounts for renting a car, offering services such as sanitisation of cars through Mahindra First Choice wheels and flight bookings, Singh offered a comprehensive solution to ensure people packed their bags again and hit the roads (see box). The last element of 5C, he lets on, was building capabilities. “We embraced a digital way of life,” he says. What helped in the rebound was firmly keeping an eye on the larger picture: Pandemic or no pandemic, the headroom for growth is massive in India, Singh explains. There are at least 17 to 20 million households in India with an income of Rs 15 lakh and more. Now contrast it with the number of households who own vacation ownership: Around 3.5 lakh. “This translates to a meagre 2 percent penetration,” underlines Singh. With three types of membership tenures—three, 10 and 25 years—the brand is in a position to serve the needs of a growing demand for an experiential holidaying product that suits every pocket. 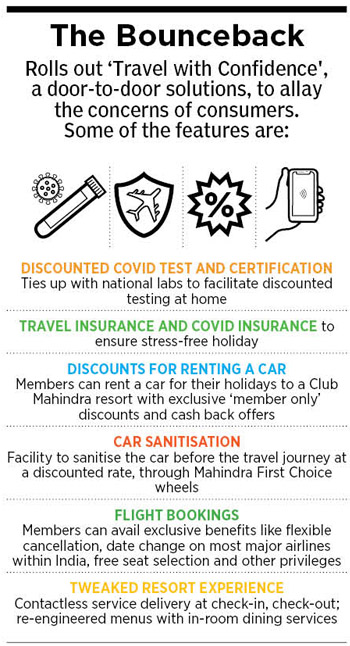 What also served Mahindra Holidays & Resorts best was its unique business model. “We are not a traditional hospitality player. Our business model is very different and resilient,” Singh underlines, adding that there is predictability to the revenue stream. He explains. A sizeable member base of over 2.6 lakh—till the end of last September—generates three broad multiple revenue streams. First comes vacation ownership income, which is a membership fee. Then there is annual subscription fee. And the third one is the resort income, which comes when people holiday at resorts. Singh breaks down the three components to explain how the model is different from a traditional hospitality player. Let’s start with the membership free. If one becomes a member and has to pay Rs 100 as a fee, the company can only recognise Rs 4 as income. The rest—Rs 96—gets pushed over to 24 years. “In my books, I have Rs 5,300 crore of deferred revenue which is sitting over there with usually approved income on the vacation ownership revenue,” he says. So the vacation ownership income comes from the deferred revenue pool, which has grown and continues to grow. 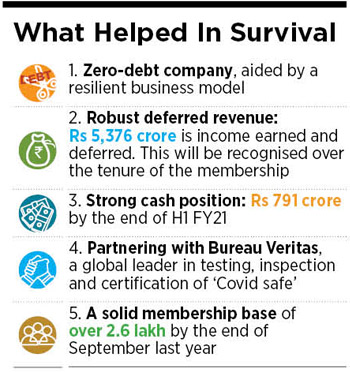 Annual subscription fee too has been consistent and predictable. Even during the pandemic, the members continued to pay. “Though there were some delays, there was never a question of not paying,” he says. The track record of maintaining high occupancy of above 80 percent at resorts, he points out, has ensured continuous and consistent resort revenue growth. With a strong balance sheet, a deferred revenue pool of over Rs 5,300 crore—which keeps accruing over the years into the vacation ownership income—and regular cash flows and free cash of Rs 791 crore, the business is indeed built on a model which is self-sustaining. Add to it Rs 1,596 crore of receivables, and it provides the company liquidity in excess of Rs 2,000 crore. Despite Covid and significantly lower resort revenues, Singh asserts, the company has been able to deliver robust operating performance. Improved profitability came on the back of substantial cost-saving measures. While total cost was cut by an estimated 29 percent, sales and marketing expenses were slashed by 36 percent. What helped in tandem was a rising share of referrals and digital: It was at 53 percent of the total member addition in the second quarter of last year as compared to 40 percent during the same period in 2019. The company also managed to get hefty waivers on lease rentals for resorts and branch offices. Other expenses too—resort consumption, energy and travel expenses—came down by a good 41 percent. 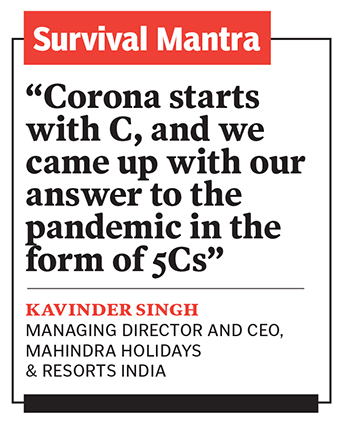 All the initiatives, Singh underlines, helped in staging a gritty rebound.  The rebound, and the future of travel and holidaying, will only gather pace and look promising. Singh offers three reasons. First, the desire to explore, wander, and experience new destinations will not go away. “This can’t be satisfied virtually,” he says. Second, the desire to bond with friends and family too will stay intact. Lastly, the desire to belong to a club or being affiliated to a community will survive. “These three things will hold us good even after the pandemic,” he says.   For the time being, though, with the vaccination drive underway across the country, Singh can hope for a V-shaped recovery. The magic, he signs off, is in clubbing together and staying clubbed.