Though 59% of the population has received at least one dose of a Covid-19 vaccine, the recent surge took a heavy toll with nearly half of the country's 200 Covid-19 deaths being reported in May

By Maahil Mohamed and Mike Ives 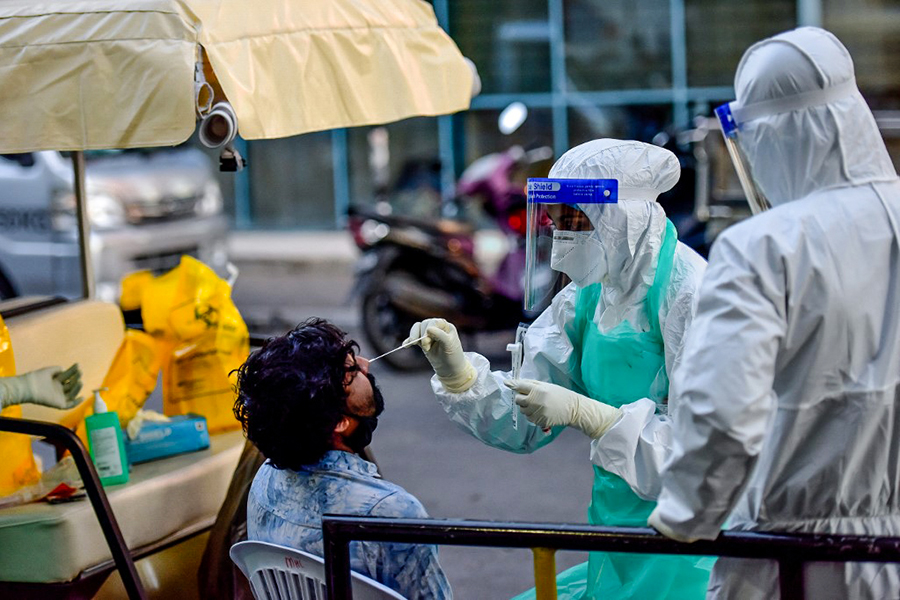 A medical worker (C) wearing full protective gear takes a swab sample from a man to be tested for the COVID-19 coronavirus on a street in Male on June 5, 2020.
Image: Ahmed SHURAU / AFP

MALÉ, Maldives — The largest COVID-19 treatment facility in the Maldives has nearly 300 beds and a steady supply of oxygen. But as the country reported some of the world’s highest caseloads per capita last month, COVID wards ran low on another essential resource: employees.
“At worst, we had one nurse to attend to 20 patients in the general wards,” said Mariya Saeed, the head of the Hulhumalé Medical Facility in Malé, the capital. “We needed human resources to provide proper care to the many bedridden elderly, but the nurses were exhausted.”
The pandemic has triggered shortages of health workers around the world, forcing governments to scramble. Spain, for instance, launched an emergency plan last year to recruit medical students and retired doctors for COVID duty. And in India last month, Prime Minister Narendra Modi asked local officials to start recruiting final year medical students.
But the Maldives, an archipelago of about 1,200 islands in the Indian Ocean, faces unique challenges. It can’t easily call up masses of students because it has only one university with a school of medicine. And it can’t rely just on its citizens, because its health care system depends largely on foreign workers. Many of those doctors and nurses come from India, a country that is facing its own gargantuan outbreak.
One result is that the Maldives, which has otherwise tackled the pandemic with meticulous attention to detail, isn’t sure how to staff its hospitals for the next crisis.
“We have spoken to countries like Bangladesh and India” about recruiting their doctors and nurses, President Ibrahim Mohamed Solih told reporters last month. “But they are unable to provide any assistance due to their own COVID situations.”
The Maldives, a Muslim-majority nation with a population of about 540,000, has styled itself a model of pandemic response for small countries. Using aggressive contact tracing, and relying on dispersed island geography to slow outbreaks, the government kept its COVID caseload low enough to lift curbs on domestic movements and lure international tourists back to its luxury resorts, a mainstay of the economy. In April it allowed Ramadan feasts and nationwide council elections to go ahead as usual.
“You never know what will happen tomorrow,” Thoyyib Mohamed, the managing director of the country’s official public relations agency, told The New York Times in February. “But for the time being, I must say: This is a really good case study for the entire world, especially tropical destinations.”
Though 59% of the population has received at least one dose of a COVID-19 vaccine, the recent surge took a heavy toll. Nearly half of the country’s 200 COVID-19 deaths during the entire pandemic were reported in May.
Many people in Malé now have someone in their extended families who has died, said Marjan Montazemi, the UNICEF representative to the Maldives. “Because the numbers are not the same as in other countries, it doesn’t attract that much attention,” she said. “But for the country it has been quite difficult.”
Officials in the Maldives have not confirmed how variants may have influenced the latest outbreak, but local doctors say the Delta variant, first detected in neighboring India, likely played a role.
As cases surged to more than 1,500 a day last month, hundreds of COVID-19 patients descended on the Hulhumalé Medical Facility. Despite being built last year for the purpose of treating COVID patients, the facility — staffed with 16 doctors and 89 nurses — was not ready.
“We were always prepared for a possible surge, but a wave this sudden and massive was just unexpected,” said Nazla Musthafa, a health adviser to the government.
To compensate for a shortage of doctors and nurses, Maldives National University’s medical school — which opened in 2019 and has a total of 115 students — sent dozens of medical and nursing students to help work in Malé’s COVID wards. The government also called nurses out of retirement and drafted volunteers with no medical experience.
The bottleneck highlights a dependence on foreign health workers that the government knew was a problem even before the pandemic hit.
In 2018, expatriates made up all but a fifth of the Maldives’ 900 or so doctors and more than half of its nearly 3,000 nurses, leading to high turnover that affects the quality of health care, a government report said.
Other countries, including Ireland, Israel and New Zealand, also rely heavily on expatriates to work in health care. But unlike them, the Maldives isn’t rich. That means it can’t compete as aggressively to lure foreign doctors and nurses, especially during a pandemic that has left virtually every nation’s health workforce short-handed.
S. Irudaya Rajan, the chairman of the International Institute of Migration and Development, a research organization based in southern India, said that he expected countries that send large numbers of health workers abroad, including India and the Philippines, to tweak policies to keep more workers at home.
The Maldives needs a better strategy for securing a steadier supply of expatriate doctors and nurses, Rajan said. One option would be to sponsor Indian medical students in India and require them to work in the Maldives for a few years after graduating, he said.
“One lesson every country should learn from COVID-19 is: Don’t exploit poor countries like India and the Philippines,” Rajan said. “Invest in them and their people, and they can benefit you.”

Tweets by @forbes_india
Leadership is all about stewardship, and empowering your team: Kumar Sangakkara
Knocking at the door of stagflation or merely a few quarters of rising inflation?