The Taliban's leaders: Worldly and 'inclusive' or ruthless ideologues? 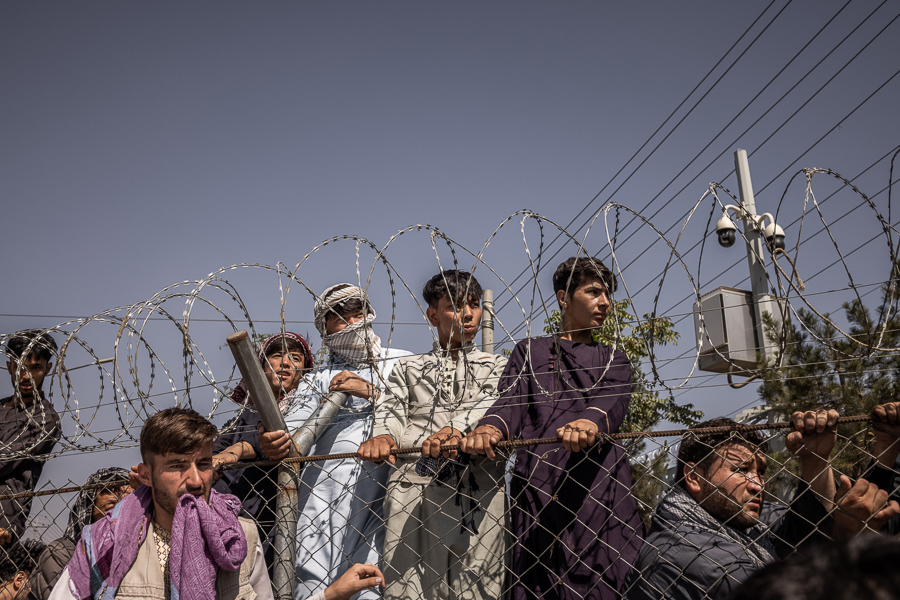 People gather in front of the international airport in Kabul, Afghanistan on Monday, Aug. 16, 2021, after the Taliban took control of the country; Image: Jim Huylebroek/The New York Times

One issued official blessings for the suicide bombers who killed scores in Afghanistan’s cities. Another enthusiastically deployed these bombers, as well as the gunmen who terrorized Afghan civil society in dozens of targeted assassinations.These are the top leaders of the Taliban, men who have spent years on the run, in hiding, in jail and dodging U.S. drones. They are emerging now from obscurity after a 20-year battle, but little is known about them or how they plan to govern.Afghanistan’s fate rests in their hands: the movement’s supreme leader, Maulawi Hibatullah Akhunzada; its political leader, Mullah Abdul Ghani Baradar; and several younger members who have led on the battlefield.They have moved into the capital, Kabul, and are taking charge of the government and a nation of 39 million people. They have worked hard in the past few days to signal to the world that they are more worldly and tolerant than their predecessors in the 1990s, willing to work with women and urging people to get back to their jobs without fear of reprisals.But the question remains: Have they really cast off an extremist ideology that carried them through two decades of war, or is this all a ruse designed to win global approval?At a news conference Tuesday in Kabul, the Taliban’s chief spokesperson, Zabihullah Mujahid, was in conciliatory mode. “Animosities have come to an end and we would like to live peacefully, without internal or external enemies,” he said. “I would like to assure that after consultations that are going to be completed very soon, we will be witnessing the formation of a strong, Islamic and inclusive government.”He did not mention the assassination 11 days earlier of his predecessor, Dawa Khan Menapal, the spokesperson of the government of President Ashraf Ghani, who had delivered briefings from the same desk.Nor did he mention Taliban fighters beating citizens at the Kabul airport or reports from provincial cities of backsliding into their old ways. In Kunduz, for example, Taliban officials, frustrated at civil servants’ refusal to return to work, set up checkpoints and sent fighters door to door looking for municipal workers.There have been positive signs. A lower-ranking member of their hierarchy gave an interview to a female television journalist Tuesday, and Reporters Without Borders won a vague promise that the Taliban would respect freedom of the press.And after moving into Kabul, the Taliban leadership did not immediately announce the formation of a new government, a sign to some observers that they remain open to some form of “inclusive” governance, as Mujahid said.“If the Taliban wanted a one-sided government, they would have already declared an Islamic Emirate of Afghanistan yesterday in the presidential palace,” Maulvi Qalamuddin, a former Taliban minister, said in an interview. “They would have announced their Cabinet.”Others said it is likely to be some time before these matters are settled.“There are people in there who think along more pragmatic lines, and some who don’t,” said a leading scholar of the Taliban, Antonio Giustozzi. “And I think there will be a struggle. If there are incentives” in the form of gestures by outside powers, he added, then “I think it will be easier for the pragmatists.”Whether the Taliban’s actions since taking control are signs of genuine openness or a looming power struggle between moderate and hard-line factions remains to be seen. But what little is known of the biographies of these leaders yields some clues.

Akhundzada, the supreme leader and an Islamic legal scholar, has long been an enthusiastic proponent of suicide bombing. His own son trained to be a suicide bomber, with his father’s approval, and at 23 blew himself up in an attack in Helmand province. That sacrifice raised Akhundzada’s profile in the movement, said Carter Malkasian, author of “The American War in Afghanistan.”He “believed in martyrdom and suicide bombing,” Malkasian wrote.A former judge in the Taliban regime’s military court, Akhundzada later issued many of the fatwas, or religious orders, blessing suicide bombers. “He is someone who is really a spiritual guide and ideologue,” said Thomas Joscelyn, a senior fellow at the Foundation for Defending Democracies and senior editor of the group’s Long War Journal.He was chosen as a compromise candidate by the Taliban’s leadership after his predecessor, Akhtar Mohammad Mansour, was killed in a U.S. drone strike in 2016.“They needed somebody more consensual, somebody more able to keep the different factions together,” Giustozzi said. “He became a kind of prime minister. He is more leaning towards the pragmatic end.”Most recently, he overruled the group’s political leaders and gave the go-ahead to the military wing to step up attacks on Afghan cities, Giustozzi said, in what turned out to be a winning bet.Akhundzada’s deputy, Sirajuddin Haqqani, son of a legendary mujahedeen figure and head of the Haqqani network in Pakistan and eastern Afghanistan, has led much of the recent military efforts.Haqqani, 48, widely known as Khalifa, oversees a sprawling web of fighters, religious schools and businesses with strong links to Gulf Arab countries from a base in Pakistan’s tribal areas. Known for its close ties to the Pakistani intelligence service, the Haqqani network became the most dogged opponent of the U.S. presence in Afghanistan, responsible for hostage taking of Americans, complex suicide attacks and targeted assassinations.Haqqani and his network also have some of the strongest and longest-running ties to al-Qaida. From their stronghold on the Pakistani border, they helped al-Qaida leader Osama bin Laden escape from his headquarters in Tora Bora after the U.S. invasion in 2001.“The Haqqanis sit at the nexus between the Taliban and al-Qaida; they are one of the key bridges,” Joscelyn said.Mullah Mohammad Yaqoob, son of the Taliban’s founder, Mullah Mohammad Omar, has also gained importance for his work with the Taliban’s military forces, although Joscelyn said he will not challenge Haqqani for the No. 2 spot.While his pedigree is unquestionable, he is considered less dogmatic than his famously stubborn father, and overcame a challenge from a hotheaded rival for leadership of the military wing of the Taliban movement.Baradar, the Taliban’s chief political leader, cuts a less menacing figure than Haqqani and is believed to be as influential in the hierarchy as Akhundzada. One of the movement’s early joiners, he served as principal deputy to Omar, and fought in the same mujahedeen unit as Omar in the war against the Soviets.Baradar led the movement’s military operations until his arrest by Pakistan, under U.S. pressure, in 2010. Under his leadership the units were notable for their skillful use of guerrilla tactics against the British and the Americans. His “peaceful demeanor,” in the words of Malkasian, did not preclude a wholehearted endorsement of suicide bombings.After three years in a Pakistani prison, he was released to house arrest in 2013. He was released from that in 2019, under U.S. pressure, so he could help negotiate the peace deal concluded with the Trump administration in 2020.In the course of the negotiations. he developed a “warm” relationship with the U.S. envoy at the peace talks, Zalmay Khalilzad, according to Malkasian. On Tuesday, he entered his hometown, Kandahar, the birthplace of the Taliban, to a triumphant welcome from its citizens.While the Taliban leadership has unquestionably grown more sophisticated, it will take a lot more than words to convince their legion of skeptics. Joscelyn, for one, says the group remains the extremist organization it always was.“They haven’t changed their ideology, and their ideology is this austere strict version of Islam that they’ve had since the 1980s,” he said. “Women are only going to have the rights as defined under their version of Islam. They are back to square one.”